Jordan Binnington made save after save to pull off yet another playoff victory — and make some team history — for the Blues.
Listen now to WTOP News WTOP.com | Alexa | Google Home | WTOP App | 103.5 FM

ST. LOUIS (AP) — Jordan Binnington made save after save to pull off yet another playoff victory — and make some team history — for the Blues.

The rookie goalie stopped 29 shots to set a franchise record with his 10th postseason win this year and St. Louis edged the San Jose Sharks 2-1 on Friday night to even the Western Conference final at two games apiece.

“He’s been dynamite back there for us all year and his first game he came in and had a goose egg and just took over from there,” Blues defenseman Colton Parayko said of Binnington. “It’s been fun to watch.

Binnington moved past Brian Elliott (2016) and Roman Turek (2001) for the most wins by a Blues goalie in a single playoffs. He is the 10th rookie netminder to win at least 10 games in a single postseason in league history.

“It’s a great honor,” Binnington said. “Obviously, I’m having a lot of fun back here playing with this team. They’re doing a great job. They limited chances tonight. They played a complete game and I just tried to do my job.”

Tyler Bozak and Ivan Barbashev scored in the first period for the Blues, giving Binnington all the scoring he needed.

Tomas Hertl scored for the Sharks, and Martin Jones made 20 saves.

Game 5 is in San Jose on Sunday.

Barbashev gave the Blues a quick lead when his shot deflected off of Gustav Nyquist’s stick and into the net just 35 seconds in. Alexander Steen’s hip check of Brent Burns behind the Sharks’ net created a turnover that led to Barbashev’s first career playoff goal.

There have been seven goals scored in the opening minute of playoff games this year, with three of them coming against San Jose – the most since the Boston Bruins allowed four during their Stanley Cup run in 2011.

The Blues needed just 9 seconds to convert on a power play as Bozak’s shot found its way through several skates and past Jones to make it 2-0 with 2:07 left in the first.

“We kind of were stressing we’ve got to get more pucks on net with traffic and we were just kind of passing it around the outside a little too much,” Bozak said. “Great shot by Vlady (Tarasenko) and Patty (Maroon) got a tip. Just a loose puck in front and I got kind of lucky that it ended up on my stick and went in.”

San Jose tilted the ice in its favor in the second period, but Binnington stopped all 11 shots the Sharks sent his way. Burns had the Sharks’ best chance, hitting the crossbar with about three minutes left in the period.

Hertl banged home a rebound off of a slap shot by Burns on the Sharks’ second power play of the game at 6:48 of the third period to cut the Blues’ lead to 2-1. The goal snapped San Jose’s scoreless streak of 226 minutes, 48 seconds in Game 4s this postseason after being shut out in the first two rounds.

Jones stopped the last 13 shots he faced to keep the Sharks close.

“It was a tough first (period), obviously,” Burns said. “After that, I think we battled back there, had some good looks. I think we got better. We’re going to have to have better. That’s a great team over there. Still looking for a solid 60, I think.”

One major concern for the Sharks is the status of star defenseman Erik Karlsson, who was sidelined during part of the third period with an undisclosed injury.

He left the ice midway through the period and missed some key shifts before returning in the closing minutes when San Jose tried to tie it with an extra skater.

Karlsson missed all but six of the Sharks’ regular-season games with leg and groin ailments. It was unclear if the current issue is related. Coach Peter DeBoer didn’t have an update on Karlsson after the game.

Soccer star Becky Sauerbrunn was at the game. The U.S. women’s national team played a friendly against New Zealand at Busch Stadium on Thursday night.

NOTES: The Blues and Sharks entered the game with 42 points each in the playoffs, the most in the NHL. … Blues D Vince Dunn, who was hit in the face by a puck in Game 3, was replaced in the lineup by Carl Gunnarsson. 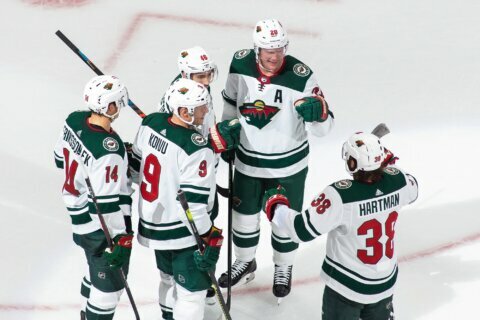 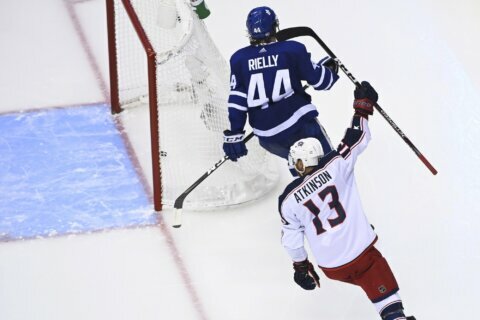 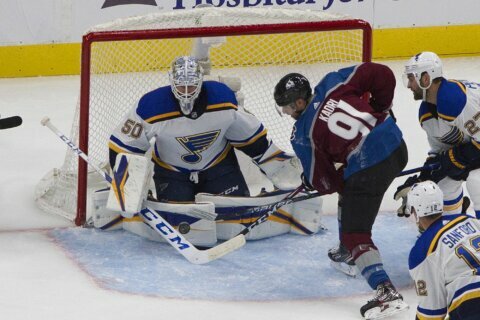