JACKSONVILLE, Fla. (AP) — Marvin Jones is preparing for his final game with the Jacksonville Jaguars. It could come Saturday night against rival Tennessee, a matchup that will decide the division and the No. 4 seed in the AFC playoffs.

The 32-year-old receiver is a pending free agent, and with former Atlanta standout Calvin Ridley expected to join the Jaguars next month, Jones appears to be the odd man out in a position group that also includes Christian Kirk and Zay Jones.

Marvin Jones understands the situation and already has moved his wife and five children from Miami to the West Coast. He hopes to be as close to them as possible next season, his 12th in the NFL. He could be among the most sought-after receivers in free agency given his track record as a reliable and sure-handed receiver.

But before he gets to that point, he’d like to help the Jaguars (8-8) reach the postseason for the first time since 2017.

Beating the Titans (7-9) would make Jacksonville the AFC South champion and extend Jones’ tenure with the team at least another week, maybe longer.

Jones made the playoffs four times previously, three with Cincinnati and his most recent trip with Detroit in 2016. He signed a two-year, $12.5 million with Jacksonville in 2021 and instantly became rookie Trevor Lawrence’s top target.

While the trio of newcomers have enjoyed career years, Marvin Jones has continued to be Lawrence’s “security blanket.”

They sat next to each other on every plane ride last season, with Jones often giving Lawrence guidance on how things work in the league amid a topsy-turvy season, and they have lockers a few feet apart.

“A guy with that much experience, that’s played that much football, seen a lot of things, it’s kind of invaluable,” Lawrence said. “He’s a guy that I’ve always trusted, especially on the field, and off the field, obviously, too.

“But just a guy that I I’ve had a lot of trust in since really Day 1 last year. We’ve built that relationship and I think that shows. He’s my security blanket. When all else fails, Marvin’s always there and making a play.”

Jones made perhaps the best play of Jacksonville’s season. His 10-yard, shin-dragging touchdown catch with 14 seconds remaining put the Jaguars in position to beat Baltimore in late November, a confidence-building win that started the team’s playoff push.

The Jaguars have won five of six since, including four in a row.

Jones has 44 receptions for 500 yards and three scores this season. He ended a 117-game catch streak in October, but still holds the NFL record for most touches without a fumble by a receiver, at 559.

“I don’t see anybody ever breaking it,” Jones said. “I think it’s pretty cool.”

Jones last fumbled in his final college game at Cal, and he remembers it vividly. The Bears were playing Texas in the 2011 Holiday Bowl, and Jones coughed up the ball on the team’s final play. He recalls three more fumbles in his football life, the most memorable one coming in 1998 in California when a fumble ruined a 200-yard, three-TD rushing day.

“I went straight to my dad and cried,” he said.

It remains a painful reminder of the importance of ball security for an experienced receiver entering the twilight of a career that includes nearly 7,500 yards receiving, 58 TDs and no fumbles.

“You throw the ball to me, and I’ll make it work,” he said. “No matter what situation — if it’s fourth down or you need a touchdown at the end of the game — that’s just how I do it,” Jones said. “That’s how I am, and I can do it time and time again.

“Regardless of my role, I know that when the ball comes my way, I’m going to make the play.” 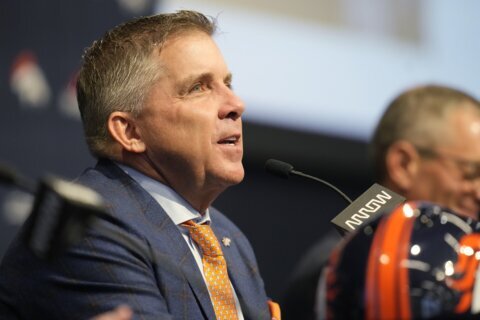 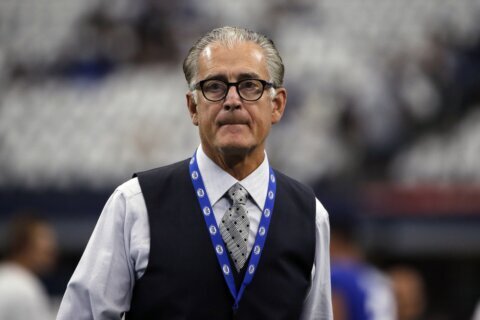