NASHVILLE, Tenn. (AP) — The Tennessee Titans started exactly the way they wanted, jumping out to a double-digit lead.

Finishing was the issue.

The Titans blew a 13-point lead Sunday, then drove down the field to set up Randy Bullock for a 47-yard field goal to beat the New York Giants. The kicker on his sixth NFL team yanked the game-winning attempt wide left to turn a season-opening win into a 21-20 loss.

“Anytime you lose it’s a gut punch,” Titans coach Mike Vrabel said. “We put a lot into it. We got it started how we wanted to. I give them a lot of credit. We went flat, and we weren’t able to get anything going there in the second half.”

The Titans were the AFC’s No. 1 seed a year ago with a 12-5 record and lost the divisional game on this same field in January after a turnover with 20 seconds left set up the winning field goal. On Sunday, the Titans led 13-0 at halftime, settling for a pair of field goals after drives stalled in the second quarter.

Bullock was 8 of 13 on kicks between 40 and 49 yards last season after becoming Tennessee’s third kicker. He replaced Michael Badgley, who lasted one game after replacing Sam Ficken, who was placed on injured reserve just before the season opener.

The Titans tried to bring in competition for Bullock. Undrafted rookie Caleb Shudak out of Iowa appeared ready to make it a good fight until he hurt a leg during the offseason program. He’s currently on the physically unable to perform list, keeping him out the next three games.

“I don’t think we finished the way, obviously, that we wanted to,” said Tannehill, who finished with 266 yards and two touchdown passes. “We didn’t move the ball effectively enough throughout the game. And like you said, we had spurts where we did some good things. We’ve just got to be more consistent.”

The defense came up with five sacks and two turnovers, one an interception by Amani Hooker in the end zone. But the Titans who ranked second in the NFL giving up only 84.6 yards rushing per game last season while earning the AFC’s No. 1 seed, gave up 122 of Saquon Barkley’s 164 yards rushing in the second half.

They only sacked Daniel Jones once in the second half after having four by halftime. Cornerback Kristian Fulton completely lost Sterling Shepard on a 65-yard catch-and-run TD.

“We’ve got to come back and fix it, because we’ve got another big game Monday night,” said Pro Bowl defensive tackle Jeffery Simmons, who had two sacks and a forced fumble. “I know they’re going to try to run the ball, running back, quarterback. We’ve got to prepare and get it corrected.” 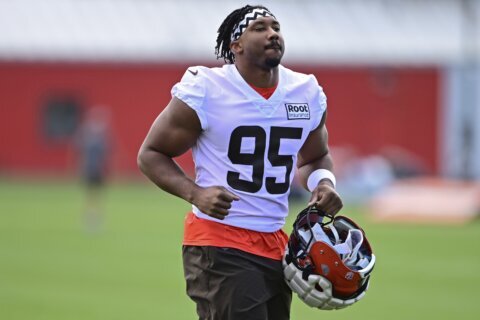