QB Ryan makes his debut for Indy in opener against Texans

HOUSTON (AP) — Matt Ryan is ready for his next challenge as he prepares for his debut with the Indianapolis…
Listen now to WTOP News WTOP.com | Alexa | Google Home | WTOP App | 103.5 FM

HOUSTON (AP) — Matt Ryan is ready for his next challenge as he prepares for his debut with the Indianapolis Colts Sunday against the Houston Texans after spending his entire 14-year career in Atlanta.

And he admitted this week that even after 222 career starts, he still gets fired up for every game.

“Even from when you’re a kid, that first one of the year — there’s just so much buildup to it that’s different than other weeks,” Ryan said. “You’re definitely excited, and obviously for me being in a new spot and a new routine this week, all those things, it feels good that it’s here. I’m ready to go.”

As Ryan tries to help the Colts end a streak of eight straight losses in openers, coach Frank Reich was asked if thinks the quarterback has something to prove after the Falcons moved on from him.

He’ll face a familiar foe in new Texans coach Lovie Smith, who was hired this offseason to replace David Culley, who lasted one season. Ryan’s history facing Smith goes all the way back to 2008 when he coached the Bears.

Smith knows his team will have its hands full in defending Ryan with a revamped secondary that will feature two rookie starters. Third overall pick Derek Stingley will start at cornerback and second-round selection Jalen Pitre is starting at one of the safety positions.

“Played against him quite a few times and he’s been one of the best quarterbacks in our league,” Smith said. “He can make all the throws. … He knows the game, smart. It’s not like we’re going to trick him an awful lot.”

The Texans are hoping to perform much better against the Colts than they did last year, when they lost two games by a combined score of 62-3.

“Your opener is against a team that really embarrassed you last year,” receiver Brandin Cooks said. “You don’t forget, but you don’t let that cloud and gray affect what you have to get done. You still have to focus on the details and don’t get too carried away on necessarily revenge.”

Defending NFL rushing champion Jonathan Taylor can’t wait for Sunday to arrive. Indy held its workhorse back out of all three preseason games and he hasn’t taken a hit in months.

Taylor, of course, has carried a heavy workload over the past five years — so much so that some draft analysts questioned whether the former Wisconsin star had too much wear and tear on his legs. But he only seems to be getting stronger.

Not only did he post a league-leading 1,811 yards rushing last season, he also led the NFL with 18 touchdown runs and his 20 total TDs were tied with Austin Ekeler for the league high.

“I haven’t played football since January, so I’m really excited to get out there and play,” Taylor said Thursday.

Rookie fourth-round pick Dameon Pierce used an outstanding camp to climb the depth chart and will start Sunday at running back for Houston.

The hard-running Pierce was so impressive in the preseason that the Texans cut veteran Marlon Mack, who entered camp as the presumed starter. Pierce joined the Texans after a four-year career at Florida where he ran for 1,806 yards and 23 touchdowns.

He’ll try to turn around a running game that has been among the NFL’s worst the past two seasons.

“He’s earned the right to line up there with the (starters) the first snap and I’m anxious to see him play,” Smith said.

Indy’s defense was second in takeaways last season and ninth in points allowed. The Colts’ offseason additions could help them play even better this season.

The combination of Ngakoue and Gilmore should help Indy fill two glaring holes from last season — a consistent pass rush and a pass defense that struggled to close out games.

Third-year receiver Michael Pittman Jr. will be Ryan’s top target. Beyond Pittman, though, there are plenty of questions.

Rookie Alec Pierce, a second-round draft pick, improved throughout training camp and has the potential to be a playmaker. Reich is hoping Parris Campbell can stay healthy enough to emerge as the No. 3 receiver.

And the Colts are counting on the combination of Taylor and running back Nyheim Hines to provide more explosiveness in the passing game. 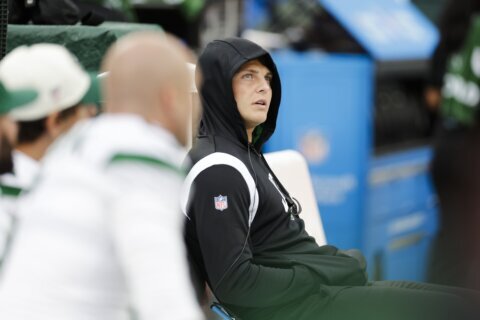 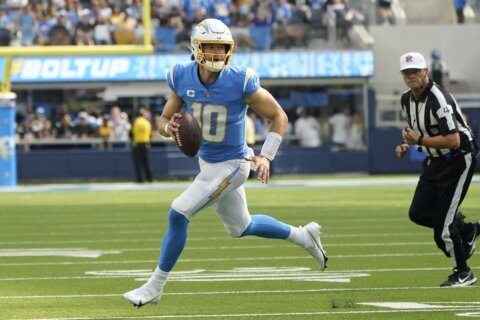