JACKSONVILLE, Fla. (AP) — No NFL team has fewer victories on the West Coast than the Jacksonville Jaguars.

The franchise is 3-15 all-time in the Pacific Time Zone and winless when facing the Chargers on the road: 0-4 in San Diego and 0-1 in Los Angeles.

It’s one of two losing streaks Jacksonville (1-1) hopes to end when it plays at the Los Angeles Chargers (1-1) on Sunday. The Jaguars also have dropped 18 consecutive road games, tied for the eighth-longest skid in league history.

Everything about these Jaguars certainly looks and feels different right now. They’re coming off a 24-0 drubbing of AFC South rival Indianapolis, the franchise’s eighth shutout in 28 seasons and first since 2018. The last three have come against the Colts.

Pederson’s message to his players has been the same both weeks: “So what, now what?” His motto might resonate more coming off a dominating win and preparing to face one of the AFC’s top teams.

“If you keep dwelling on the good stuff or the bad stuff from the past, it’s going to haunt you because now you’re spending all your attention on something that’s passed,” linebacker Josh Allen said. “You can’t really look at your work and say, ‘Dang, I did good.’ You just can’t live on that.

Upsetting the Chargers, who are 7-point favorites according to FanDuel Sportsbook, would be a huge step forward for one of the youngest teams in the league and one that appears, finally, to be headed in the right direction after years of futility.

Jacksonville has allowed at least 33 points in each of the six games at the Chargers, outscored 182-91 in those contests. All of them have been decided by double digits.

Of course, that’s the norm for Jacksonville on the opposite coast. Of the team’s 15 road losses against the Chargers, Oakland, San Francisco, Seattle and the Los Angeles Rams, 13 of them have been by 10 points or more.

The Jags were non-competitive in both West Coast trips in 2021, losing 31-7 after a bye week at the Seahawks and 37-7 to the Rams in early December. Then-coach Urban Meyer had the team leave Friday, a day earlier than usual for most road trips, in hopes of getting everyone acclimated to the time difference. It backfired.

Pederson is switching things up and keeping his team on East Coast time.

“Every time zone you go back, it takes a day or so, 24 hours, to kind of catch up,” he said. “So really you should go out on like Thursday if you really want to catch up. If you just keep everything sort of status (quo) and keep the way we’ve been doing it here, you don’t have to worry about anything other than the time.”

Jacksonville last won on the West Coast in December 2019, spoiling the Raiders’ final game at the Oakland Coliseum. That’s also the team’s last road victory. The Jags were winless on the road in 2020 and 2021.

“We’ve got to do things different,” Robertson-Harris said. “We can’t do the same things we did a year ago because obviously what we did didn’t work. We were 2-100 or whatever it was; I don’t even know what the damn record was, but it wasn’t good.” 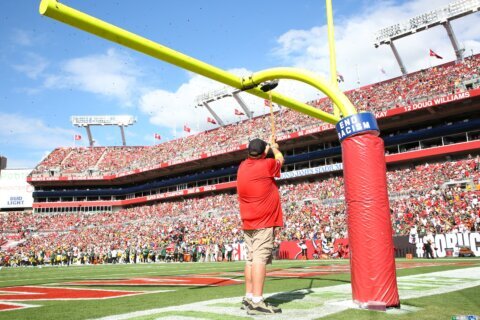 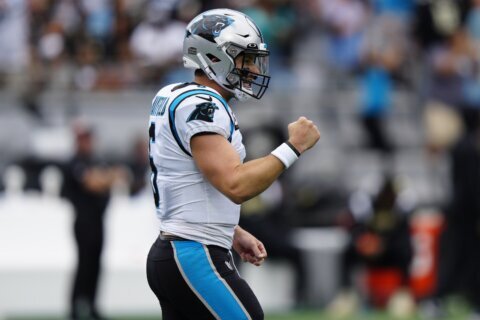 Mayfield’s transition to Carolina anything but smooth so far