INGLEWOOD, Calif. (AP) — The Buffalo Bills have fallen short in enough playoff games in recent years to know the season is long and the opener doesn’t mean much in January.

They still felt justified in their championship aspirations after going into the Super Bowl winners’ home stadium and completely wrecking their banner-raising party on the NFL’s opening night.

Josh Allen passed for 297 yards while accounting for four touchdowns, Miller had two of Buffalo’s seven sacks, and the Bills stamped themselves as a clear contender for the Rams’ crown with a 31-10 victory over Los Angeles on Thursday night.

Gabe Davis, Isaiah McKenzie and Stefon Diggs caught TD passes as the two-time defending AFC East champions began the NFL’s 103rd season by overcoming four turnovers and running away with a blowout win in the same arena where the Rams won it all nearly seven months ago.

Allen went 26 for 31 despite two interceptions. He also rushed for 56 yards, scrambling for a 4-yard TD when he stretched the ball over the line with 13:27 to play.

The star quarterback took his share of hits, but he also dished them out and showed off a mean stiff-arm while Buffalo’s offense under new coordinator Ken Dorsey largely dominated the champs. The Bills went 9 for 10 on third downs and racked up 413 total yards, eventually pulling away after three first-half turnovers kept it close early.

“There’s a lot to learn, but that second half, that’s who we want to be, going out there and executing that way,” Allen said. “We were 90% on third down. That’s a recipe for success.”

Matthew Stafford passed for 240 yards with one TD and three interceptions on a bruising night for the Rams, who lost a season opener and fell below .500 for the first time in coach Sean McVay’s six seasons in charge.

“Very humbling night, but one where you look yourself in the mirror and say you have to be better,” McVay said. “We weren’t ready to go. That’s on me. … There were a lot of decisions I made that didn’t put us in the best position to succeed. It was a very humbling night.”

The Bills’ seven sacks were the most allowed in McVay’s tenure with the Rams, who lost two starters from last year’s offensive line and attempted to replace them internally. Miller came through, but he was just one contributor on a night when Buffalo didn’t even need to blitz once to keep Stafford in check.

Super Bowl MVP Cooper Kupp had 13 catches for 128 yards and a touchdown, but the Rams’ night went quickly downhill. Los Angeles could not keep up with Allen’s creative playmaking or the Bills’ pass rush, and its only major offseason addition on offense — receiver Allen Robinson — had one catch on two targets.

Los Angeles trailed 17-10 after three quarters, but Buffalo ran away with two lengthy TD drives early in the fourth. The Rams even got shut out in the second half, ending a streak of 89 consecutive halves with a point since November 2019.

“We could play a whole lot better than that, no doubt,” Stafford said. “The one thing that gives me a good feeling is knowing the guys in that locker room and knowing we’re going to band together.”

Miller made an immediate impact in his debut for the Bills, who signed him away from the Rams after he won a ring in his half-season in LA. But he was just one part of a defense that yielded only 177 yards before Los Angeles’ final, meaningless drive.

Aaron Donald made his 99th career sack in the first half, but the seven-time All-Pro had just two tackles as the Rams became only the second defending champions in the last 10 years to lose the following season opener. They also lost by the second-biggest margin in league history for a Super Bowl winner beginning its next season; Baltimore lost by 22 to Denver in 2013.

After falling behind 10-0 despite two Bills turnovers, Los Angeles finally scored on its fourth drive when Kupp made an exceptional toe-tapping TD catch three minutes before halftime. After Allen threw his second interception, Matt Gay hit a 57-yard field goal to pull the Rams even at the halftime gun.

Diggs capped the domination with a 53-yard TD catch with 9:25 to play, talking trash to Rams All-Pro defensive back Jalen Ramsey afterward.

“You’ve got the two top guys in the NFL competing against each other,” Davis said of Diggs and Ramsey. “Both going to be talking back and forth, and we’re going to see who comes out on top, you know. And 14 came out on top today, and that’s what I expect from him.”

With a long third-down pass to Kupp on his opening drive, Stafford became the 12th quarterback in NFL history to pass for 50,000 career yards. He tied Drew Brees as the fastest to the mark, doing it in 183 games. 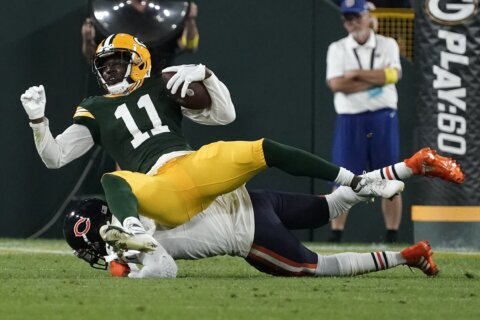