Sean McVay reveals he has contract extension with LA Rams

McVay and the Rams didn’t reveal the terms of the long-expected deal, but the youngest coach to win a Super Bowl reaffirmed his long-term commitment to Los Angeles after practice Tuesday in training camp at UC Irvine.

“I feel good,” McVay said. “It was always kind of really good dialogue that existed. These things, they take time, but I think it’s important.”

McVay didn’t specify when he finalized the deal, but it apparently happened before training camp. The 36-year-old coach is beginning his sixth season in charge of the Rams, and he has been the youngest coach in the NFL throughout his tenure.

McVay said two weeks ago that the sides were still working on a new deal, but he also said the Rams intended to announce the contract extensions for him and general manager Les Snead at the same time. On Friday, McVay said that’s why he had hoped to wait to confirm his deal, until it was mentioned in a lengthy profile of the coach posted Tuesday on ESPN.com.

“Les and I have always been a pair,” McVay said. “We wanted to announce that when both of us had gotten done. Mine is done. Les is in the process of that, but in respect of wanting to show the partnership for us … that was how I had addressed it. It is something that we’ve been taking care of.”

McVay’s new deal is a reward for an incredibly successful half-decade in charge of the Rams, who have had five winning seasons, four playoff berths, three NFC West titles, two Super Bowl appearances and one championship during his tenure.

McVay is 55-26 in the regular season and 7-3 in the postseason with the Rams, who won nine of their final 10 games last season to earn their first title since returning home to Los Angeles. The Rams beat Cincinnati 23-20 in the Super Bowl at their home SoFi Stadium.

McVay has frequently acknowledged the burnout he feels during and after NFL seasons, and he openly discussed the idea of moving into the broadcast booth in the near future during the Rams’ Super Bowl run.

Although Amazon reportedly was among the broadcasters interested in McVay, the coach quickly decided he isn’t interested in changing professions quite yet — particularly not with another loaded Rams team coming back this fall. Los Angeles is committed to keeping its Super Bowl window open for the near future, and McVay is a centerpiece of the plan.

Along with the new deal for McVay and the pending contract for Snead, the team has re-signed seven-time All-Pro defensive lineman Aaron Donald — making him the highest-paid non-quarterback in NFL history — along with quarterback Matthew Stafford and Super Bowl MVP Cooper Kupp, who are both locked in through 2026.

Snead has been in charge of the Rams since February 2012, presiding over their final years in St. Louis before McVay’s hiring kicked off a superb half-decade. Snead’s partnership with McVay has only strengthened in recent years, with Snead’s aggressive personnel moves providing fuel for McVay’s innovative coaching style.

Since arriving in Los Angeles and immediately trading up to draft Jared Goff at No. 1 overall in 2016, Snead has built a vaunted reputation as a bold executive. The Alabama native has repeatedly given away his highest draft picks while swinging trades to acquire established stars from Jalen Ramsey and Stafford to Von Miller and Odell Beckham Jr., establishing the Rams as a prime destination for NFL veterans who want to contend for titles.

Although they joined the Rams five years apart, McVay repeatedly has said that he and Snead are linked.

“I think we’re all on the same page,” McVay said. “There’s just the natural semantics that need to take place. It’s something that I know everybody has the anticipation and expectation that it will get done, but these are things that sometimes take time. But it is important because of the partnership that Les and I share.”

NOTES: McVay wasn’t pleased with his offense’s performance in team drills against the Rams’ defense on Tuesday. “Not nearly good enough offensively,” he said. “Going back and looking at the film will be good. We’ve got a long, long way to go. We’re not anywhere close to where we need to be. Nobody needs to press the panic button, but we’ve got to start having a little bit more sense of urgency overall, particularly on the offensive side of the ball.” … LB Chris Garrett missed practice with a groin injury, and McVay isn’t sure how long he’ll be out. Fellow edge rushers Leonard Floyd, who has a nagging ankle injury, and Terrell Lewis also got rest days. 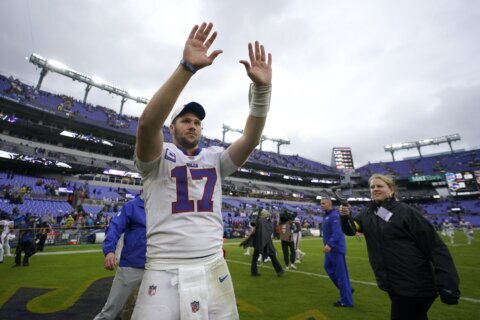