Bengals’ Burrow is practicing, should be ready for opener

CINCINNATI (AP) — Three weeks after having an appendectomy, Joe Burrow is fully participating in training camp with an eye toward getting ready for the regular-season opener next month.

The Bengals quarterback was in full uniform as he threw crisp passes in seven-on-seven drills for a second day Monday. He had surgery July 26, a day before the first workout of camp.

“The seven-on-sevens are more just mentally getting back in the groove of things, the timing of the throws, the accuracy, going against the defense and trying to see some of the disguises,” Coach Zac Taylor said before practice Monday.

“I got a chance to see him throw the ball farther than I’d seen him throw (Sunday),” Taylor said. “He looked crisp on that, he played on time, he was aggressive with his decision-making. I thought he moved well, and so again, we’ll just take it day by day.”

Taylor said he’s satisfied with the practice schedule moving forward with his franchise quarterback, who hasn’t talked to reporters since his surgery.

“We’ve got a good plan in place now,” Taylor said. “As we narrowed it down to what it’s going to look like over this week, we feel like we’ve got a good timeline on the rest of training camp and what we can do on offense to make sure he’s getting all the looks he needs to see. For him, it’s (about getting ready for) Pittsburgh. Be ready for Week 1 of the season.”

Receiver Tee Higgins is also back at practice after rehabbing from the shoulder surgery he had after the Super Bowl loss to the Los Angeles Rams in February.

The starting trio of receivers — Ja’Marr Chase, Tyler Boyd and Higgins — were back on the field together, along with the new starter at tight end, Hayden Hurst.

“It’s good to see Tee out there running around for sure,” Taylor said. “He’s such a big target, a game-changer. He does bring a lot of energy to the huddle as well. They all bring certain energy, but then when you combine them all it’s just one big ball of energy. They really play off each other, and it’s pretty cool to see that group together.”

Higgins, who rehabbed on the sidelines all the way through the organized team workouts in May and June, said he’s back to 100%.

“It felt good to be tired and actually running routes, just being out there with the guys, huffing and puffing. It felt good,” he said.

Taylor said few, if any, of the starters will play Sunday against the New York Giants as evaluation continues for rookies and players on the bubble.

The Bengals will practice against the Rams for two days before the final preseason game Aug. 27. The regular season opener is at home against AFC North rival Pittsburgh on Sept. 11.

Notes: RT La’el Collins did not practice Monday. … Participating was backup quarterback Brandon Allen, who went out after the first series in Friday’s preseason loss to the Cardinals with a suspected concussion. … Rookie cornerback Cam Taylor-Britt, who missed the preseason opener because of a core muscle injury, was still absent Monday. It’s unknown how much time he will miss.

Though Fields struggles, Bears can spread blame for loss 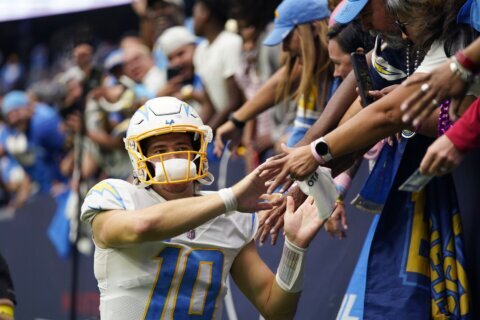 Herbert, Chargers bounce back with victory at Houston