49ers still have unknowns at QB and O-line after preseason

SANTA CLARA, Calif. (AP) — The San Francisco 49ers still face the same two major questions at the end of the exhibition season as they did at the start of training camp.

Now the Niners will have to wait until the start of the regular season for answers on whether untested quarterback Trey Lance is ready to take over the offense and whether the offensive line will be dependable enough to give Lance a chance at success.

Lance finished the exhibition season on Thursday night playing three mostly unproductive series behind a suspect line in a 17-0 loss to the Houston Texans.

“I would love to get Trey more practice and everything and more experience, so I would always want more of that, but we’ve run out of those games and he’s just ready to go as he can be,” coach Kyle Shanahan said Friday. “He needs to get in these real games now and start playing. There’s going to be times he makes some mistakes and he has to learn from them and find a way to still win the game and overcome some of those things as he learns on the run. I’m glad he did get some experience in this preseason.”

Lance ended up playing five drives in the preseason, completing 11 of 16 passes for 141 yards and one TD, leading the Niners to two scores. He was sacked twice and ran it only two times for 8 yards.

Shanahan said the biggest thing for Lance was getting out of the preseason healthy after breaking a finger in the final exhibition game last year in an injury that lingered all season.

Staying healthy this season may depend on the play of the offensive line, which struggled during the exhibition season with All-Pro left tackle Trent Williams sitting out.

Questions remain at the other four spots starting at left guard where 2021 second-round pick Aaron Banks struggled as he tries to fend off a challenge from undrafted rookie Jason Poe.

Shanahan said Banks showed improvement Thursday night from the previous week and said the issues were with the entire offense in Houston.

“I know there was definitely a couple that he missed, but I also thought it was a full offense there,” Shanahan said. “There was a couple I thought we could have got rid of the ball a lot sooner. And there was a couple that the quarterback didn’t have a chance on, so as a whole, it wasn’t good enough. When you ask him in particular, I thought he did improve from the week before.”

Jake Brendel got all of the time at center with the starting unit after Daniel Brunskill got hurt, but has started only three games since entering the NFL in 2016.

Rookie fourth-round pick Spencer Burford ran with the starters all summer, but remains a question mark headed into the season.

Right tackle Mike McGlinchey injured his knee, but hopes to be able to return in time for the opener.

“We’re not there yet. I think that’s obvious,” Shanahan said of the line. “I really do believe in the ability they have and where they can go. But the season is now just 17 days away. I do believe that the more they play, the better they’ll get, because they’re made of the right stuff and they have the ability to do it, but it does take time in this league. We got a couple guys doing that right now that are showing up a lot, but they’ll get there.”

NOTES: S Jimmie Ward (hamstring) is expected to be placed on IR next week after the roster is cut to 53 players. He will have to miss at least the first four games of the season. … LB Oren Burks sprained his knee in the game, but Shanahan said he should be ready for Week 1. … LB Curtis Robinson (sprained ankle), DL Akeem Spence (concussion) also got hurt. … Shanahan said CB Charvarius Ward should return to practice next week after missing time with a hamstring injury. 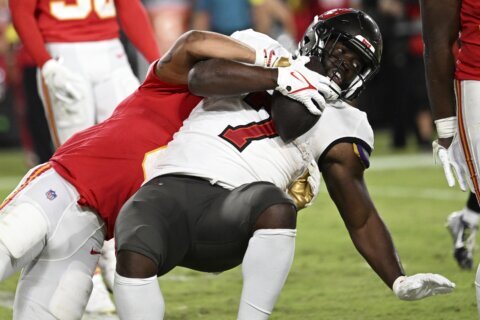 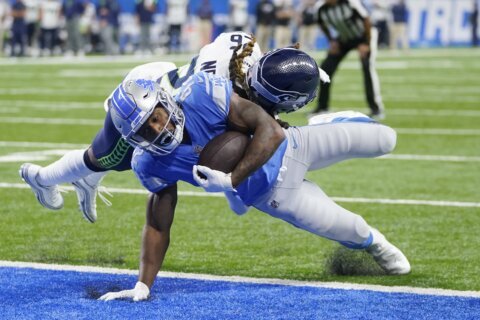