SANTA CLARA, Calif. (AP) — Danny Gray’s big-play touchdown catch from Trey Lance was the highlight from San Francisco’s exhibition opener, though it was the performance of another rookie that could prove even more important to the 49ers.

Fifth-round cornerback Samuel Womack built on an impressive training camp by flashing in his preseason debut, intercepting both passes thrown his way in a performance that could earn him a longer look in a bid to win the slot cornerback job in San Francisco.

Womack’s first interception came in the second quarter when he ripped the ball away from fellow rookie Romeo Doubs and secured it before going out of bounds.

Later in the second quarter, Womack had perfect coverage on Amari Rodgers and intercepted a pass over the middle from Jordan Love.

“I’ve just been getting used to recognizing the plays and recognizing what’s coming at me and the speed and the different routes,” Womack said. “The routes are more complex. What they do at the top of the route, how they run their routes is more deceptive for sure and I’ve just been getting ready and getting used to that every day and just trying to get better at that.”

Playing the ball has always been a strength for Womack, who had 37 passes defensed in 30 games his final three years of college at Toledo.

But his 5-foot-10 size and small-school pedigree kept him on the draft board until the fifth round when the Niners pounced to take him.

Now he has been battling veteran Darqueze Dennard in the competition to replace K’Waun Williams as the slot cornerback in San Francisco.

“We felt him out there with those picks and I thought he did a real good job in his coverage, too,” coach Kyle Shanahan said. “He had a good first outing. Still has to clean some stuff up and continue improving in the run game and some pass game stuff, but he had a good first day.”

Womack wasn’t the only rookie to make an impressive debut for San Francisco, with Gray flashing his game-breaking speed on his 76-yard TD catch from Lance.

Lance said Gray’s speed changes the way defenses have to play the Niners, but Gray knows he needs to keep honing in on the small details that Shanahan hounds him about if he wants to earn a regular role.

“It’s important for me because I’m a rookie, first of all,” he said. “Just me being in this league is a blessing, so I try to do everything correct. … The details will come, but in the middle of a play you just want to win your rep. That’s it. Be open. Don’t put anything bad on film. So I try to be very detailed and I also just try to win. That’s it.”

On a deep team with only a few holes, these players are trying to force their way into the action.

“It’s exciting to see players start to be able to do what they’re capable of doing,” fifth-year right tackle Mike McGlinchey said. “I think those guys have so much talent and they’ve done so well so far. But at the end of the day, they’re rookies and you got to continue to learn and compete.”

NOTES: DE Drake Jackson practiced after leaving the game with a stinger. … Gray (hip, back), McGlinchey (knee), CB Dontae Johnson (ribs), OL Daniel Brunskill (hamstring) and LB Curtis Robinson (groin) all sat out practice after getting hurt in the game. Both Johnson and Brunskill could miss a couple of weeks. … DL Hassan Ridgeway (quadriceps) returned to practice. … TE Charlie Woerner (core) was taken off the PUP list and did individual drills. 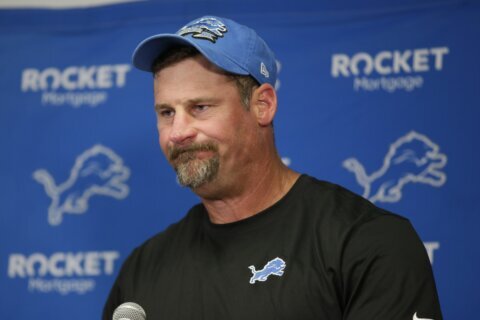 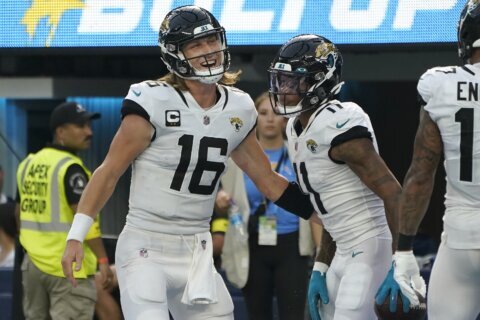