SPARTANBURG, S.C. (AP) — If Sam Darnold is bitter about the Carolina Panthers’ decision to trade for Baker Mayfield, he’s doing a great job of hiding his feelings.

Darnold said Tuesday he welcomes the competition at quarterback.

“They’re going to do whatever they feel like is best for the team to win ballgames this year,” Darnold said. “If that’s me bringing in Baker and us competing with each other for the starting job, then that’s the best thing for the team.”

Mayfield was drafted No. 1 overall in 2018 by Cleveland, but his relationship with the Browns deteriorated quickly this offseason following their pursuit of Deshaun Watson. Mayfield was traded to Carolina on July 6 for a conditional fifth-round 2024 draft pick.

Coach Matt Rhule views the quarterback situation as an open competition as the Panthers prepare for their first training camp practice on Wednesday at Wofford College.

Rhule wasn’t ready to discuss how he plans to divide up reps at practice until after he has a chance to meet with his quarterbacks. Nor would he put a timetable on when he hopes to announce a starter.

“Anytime you put timelines on things, you end up rushing to make bad decisions,” Rhule said. “To me this is about being in the moment but not making rash judgements. Guys are going to have good days and bad days. When we know, we know.”

Darnold said his relationship with Mayfield has been very cordial, but he expects the competition to be fierce in training camp.

“We’re both, in our eyes, the starting quarterback for this team right now,” Darnold said. “And that’s how we’re both gonna view it. So it’s just about going out there and competing, and that’ll be fun.”

Darnold admitted it took him a few days to “decompress” after learning about the Mayfield trade. But after the news sank in and he had a chance to talk with Rhule, Darnold called Mayfield to invite him to a throwing session the players were having prior to training camp.

Mayfield didn’t speak to reporters Tuesday on reporting day, but the often outspoken quarterback said earlier this month he and Darnold won’t let any quarterback drama impact the team.

Panthers running back Christian McCaffrey said the two QBs have handled the competition like “true professionals.”

“They’re both hungry,” McCaffrey said. “They both have massive chips on their shoulders. They’re going to compete with respect.”

Darnold said he never considered asking the Panthers for a trade after Mayfield’s arrival.

Of course, it’s not as if he’s in much of a position to force his way out of Carolina given he’s owed $18.8 million in 2022 and went 4-7 as a starter last season and finished with 13 interceptions and nine touchdown passes.

The previous time Darnold found himself in a quarterback competition was at Southern Cal in 2016, a battle he ultimately lost to Max Browne. But four games into the season, Darnold regained the job and thrived with the Trojans.

He said the biggest thing he learned from that competition was to remain consistent.

The other overlooked part of the quarterback equation is rookie Matt Corral, who was drafted by Carolina in the third round after a successful career at Mississippi.

The Panthers have said publicly they view Corral as a player that will need time to develop after coming from a spread offense in college, but the rookie isn’t buying into that idea.

“I’m going to try to compete to get the starting job by any means necessary,” Corral said. “Whatever that takes, I’m going to do. Let the cards fall where they fall.”

Rhule likes Corral’s confidence, and pointed out that Russell Wilson, also a former third-round NFL draft pick, walked into training camp in Seattle as a rookie and won the starting job after the Seahawks had just acquired Matt Flynn and given him a three-year $26 million contract.

“Hey you have to fight for what you want,” Rhule said. “My job is not to pick the starting quarterback. I have to make that decision yes, but it’s the guys’ play” that will determine who will start.”

NOTES: Panthers linebacker Shaq Thompson will open training camp on the PUP (physically unable to perform) list after having a procedure to clean out his knee. The hope is he’ll be ready for the regular season. … Panthers general manager Scott Fitterer said the team is still interested in adding a defensive end and a defensive tackle to the mix. The Panthers spoke to the agent for free agent DE Carlos Dunlap and the team remains interested in signing the two-time Pro Bowler with 96 sacks, Fitterer said. Carolina also visited with free agent DT Danny Shelton, but he has not signed a contract either. 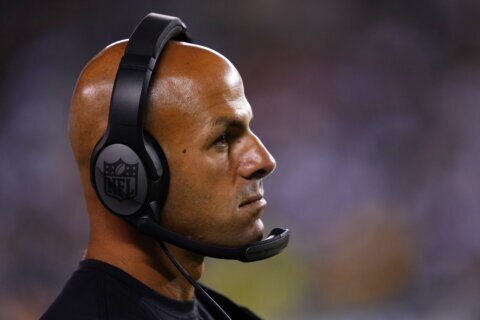 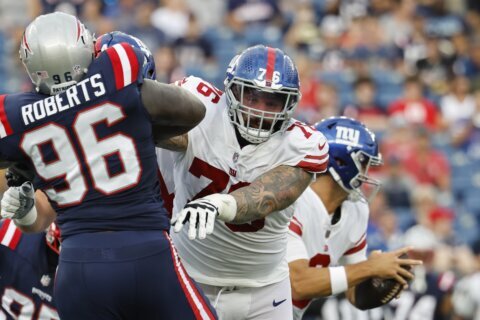 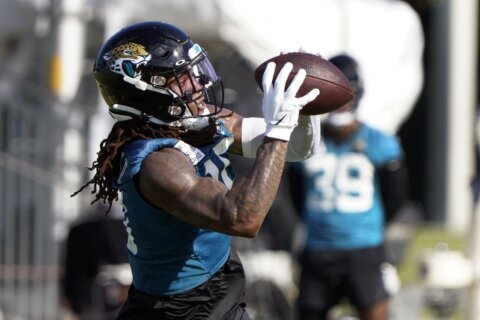 Jags waiting to see something incredible from their ‘Hulk’