GLENDALE, Ariz. (AP) — DeAndre Hopkins darted up the field Saturday at practice, made a quick cut and then a nice catch as Arizona Cardinals fans cheered in approval.

It’s a moment they won’t see again in the near future.

The Cardinals will play their first six games of the season without the three-time All-Pro receiver, who was suspended in May for violating the NFL’s policy on performance-enhancing drugs. He can return Oct. 20 for a Thursday night game against the New Orleans Saints.

“It’s football, it’s life, I’ve been through worse things in life than having to sit out six games,” Hopkins said Saturday. “So for me, mentally, I think I’ve prepared for tough moments like this.”

Hopkins is still not exactly sure what caused him to test positive for a substance that he’s previously said was a small amount of Ostarine.

There’s little doubt the suspension is a big blow for the Cardinals, who have played much better when Hopkins is on the field. Arizona was 8-2 last season in games that he played and 3-5 in games he missed, including a 34-11 loss to the Los Angeles Rams in the NFC Wild Card round.

He caught 42 passes for 572 yards and eight touchdowns last season, but even more than the numbers, he’s valuable because opposing defenses have to give him so much attention.

The 30-year-old Hopkins is allowed to practice and play in preseason games before his suspension begins in September. Kingsbury says it’s good to have him out on the field during camp, but they also want to make sure he stays healthy. He missed the final five games of last season because of a knee injury.

“You’ve got to save him from himself a little bit,” Kingsbury said. “We’re going to be smart. It does us no good to ramp him up like it’s Week 1 and he’s got two more months to sit.”

The Cardinals will lean on the newly acquired Marquise Brown, A.J. Green, Rondale Moore and tight end Zach Ertz to fill the receiving void while Hopkins is out. Brown caught 91 passes for 1,007 yards and six touchdowns last season for the Ravens — big numbers in Baltimore’s run-heavy offense.

“We’ve got a great team,” Hopkins said. “I’m sure those guys will go out and get it done.”

NOTES: Kingsbury said RB James Conner and QB Kyler Murray were limited at practice on Saturday. Kingsbury said Murray has been “throwing a ton, he reported early with the rookies, so we’re going to rest his arm.” … Kingsbury said he hopes starting left tackle D.J. Humphries (illness) will be back on the field new week. 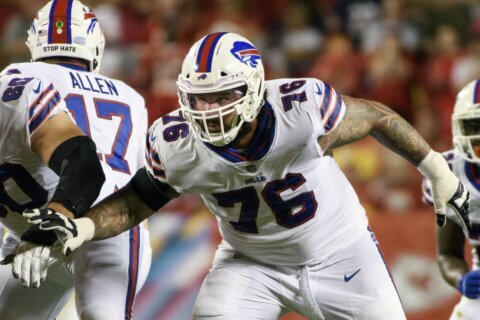