LAKE FOREST, Ill. (AP) — David Montgomery went down the list, checking off all the reasons he has no trouble staying motivated.

The Chicago Bears’ running back mentioned not getting many offers coming out of Mount Healthy High School in Cincinnati and growing up in a family that didn’t have much money. He didn’t forget all the teams that passed on him in the 2019 NFL draft before he was taken in the third round out of Iowa State.

And he also said he has a baby girl due in January.

“I’m excited to be a dad,” he said. “So just being sure that I’m being the best version of myself for my girl. But also being prepared to be the best father I can be, too.”

Whether it’s setting the right example for his daughter or focusing on becoming the best player he can be, Montgomery said the approach applies to all aspects of his life. It also explains why he is not too worried as he enters his fourth season and the final year of his rookie deal about whether he signs a contract extension or becomes a free agent.

“If you know much about me, I’m not really paying too much about a contract,” he said.

Even so, Montgomery has quite a bit at stake.

The Bears made major changes after going 6-11 last season and missing the playoffs for the ninth time in 11 years. Chairman George McCaskey fired general manager Ryan Pace and coach Matt Nagy and replaced them with Ryan Poles and Matt Eberflus.

Montgomery, meanwhile, is coming off a difficult season. He missed four games because of a sprained knee and wound up running for 849 yards after going for 1,070 the previous year. His yards per carry also dropped, from 4.3 in 2020 to 3.8.

“He pushes himself hard each day,” running back Khalil Herbert said. “He tries to be there for us in different ways, and always looking out for us.”

The play-calling didn’t always work in Montgomery’s favor last season. Nagy at times abandoned the run, and Chicago ranked near the bottom of the NFL in total offense and scoring.

Montgomery wants to show that he can be a top-tier running back, and he figures to be Chicago’s featured ball-carrier, though Herbert will likely share some of the load after flashing promise as a rookie.

“I take everything personal,” Montgomery said. “It’s just like you see lists, I see them, too. Knowing that I definitely have a child on the way puts things in other perspectives as well to tell myself ‘You gotta go harder. It’s not enough. It never will be enough.’ And the moment that it is enough, it still won’t be enough.”

So far, Eberflus likes what he sees.

“He’s been a pro and he’s been that way since the beginning,” he said. “He’s a very serious-minded kid, young man, and he is all business. He’s done that since the day I met him.”

“He’s very serious, very intense and that’s very important at that position,” Eberflus said. “He has to deliver the blow, take some and hang in there and do protections and square up on blitzers and he’s done that.”

That serious approach, Montgomery said, is ingrained in him. It took root growing up and as he went through high school and college. He reminds himself of all that when he needs an extra push.

“I know opportunities are not forever and I know that I’ve met a lot of people in my life who have squandered every opportunity that they’ve had,” he said.

NOTE: OT Teven Jenkins missed practice for the third straight day. Eberflus said Friday he “was “working through something with the trainers.”

Judon focused on being himself heading into Year 2 with Pats

Where’s Parsons? Opponents will be looking for Cowboys’ star 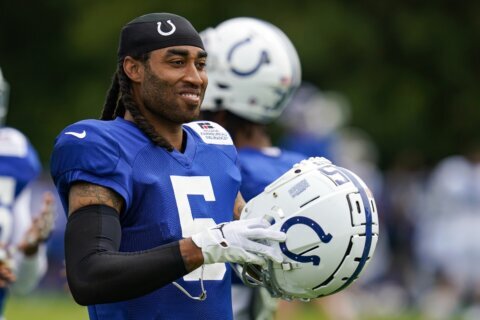 Gilmore appears to have found right landing spot in Indy