The additions of Fowler and Washington come after the Cowboys lost free agent pass rusher Randy Gregory to Denver and traded No. 1 receiver Amari Cooper to Cleveland for salary cap savings.

Fowler was the third overall pick by Jacksonville in 2015, the same year the Cowboys took Gregory late in the second round after his draft stock fell because of off-field concerns that included a positive marijuana test at the combine.

The 27-year-old Fowler has turned into a journeyman as he prepares to join his fourth team. He had a career-high 11 1/2 sacks for the Los Angeles Rams in 2019, a year after they acquired him from the Jaguars in a trade.

Washington was a second-round pick by Pittsburgh in 2018 but never had more than 735 yards receiving or five touchdowns for the Steelers.

Kearse thrived in Dallas’ first season with defensive coordinator Dan Quinn. His versality allowed the Cowboys to use him close to line of scrimmage in addition to pass coverage.

The undrafted Gifford has become a valuable specials teams player for Dallas, and saw some duty on defense last season behind NFL Defensive Rookie of the Year Micah Parsons, Keanu Neal and Vander Esch. 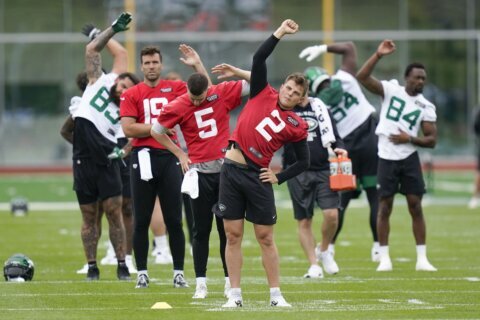