Las Vegas Raiders rookie cornerback Nate Hobbs was arrested on a misdemeanor DUI charge shortly after the team returned from a road game in Indianapolis.

The Las Vegas Metropolitan Police Department said in a statement Monday that dispatch received a call at about 4 a.m. about a driver asleep inside a vehicle parked on an exit ramp of a parking garage.

Police made contact and Hobbs failed a field sobriety test and was booked at the Clark County Detention Center for a misdemeanor DUI.

A police report was not immediately available.

The Raiders said in a statement that they are aware of the arrest and have been in contact with law enforcement officials to gather more information.

Hobbs’ arrest comes about two months after Raiders receiver Henry Ruggs III was involved in a drunk driving crash that killed a 23-year-old woman. Ruggs has been charged with felonies in that case and was released by the Raiders shortly after.

Interim coach Rich Bisaccia said he wouldn’t get into details about Hobbs’ arrest but said the message about not drinking and driving has been hammered home to his players.

“I don’t have all the information on that, but I feel good about saying they’ve been hit over the face with distractions and things of that nature,” Bisaccia said. “We’re very cognizant of the city in which we live in. I’ll leave it at that and we’ll see what it looks like by the end of the week.”

Hobbs’ arrest came hours after the Raiders (9-7) returned home from a 23-20 win at Indianapolis that left them in position to clinch their second playoff berth in 19 seasons with a victory in the season finale on Sunday night at home against the Chargers.

Hobbs had four tackles and one quarterback hit in the Colts game. He also made the key third-down stop that forced a field goal and gave the Raiders time to drive to the winning score.

The 22-year-old Hobbs was a fifth-round pick out of Illinois and has been one of the team’s best defenders in the slot. 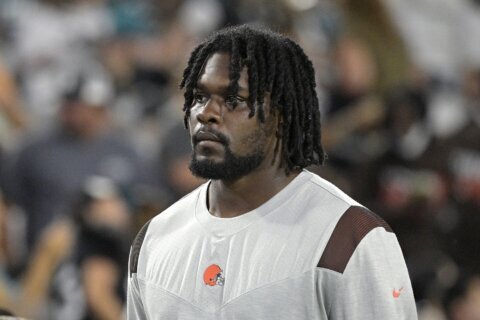