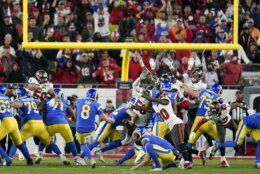 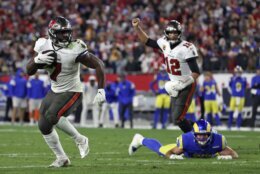 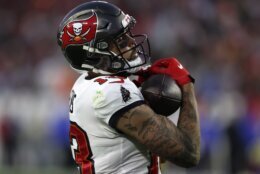 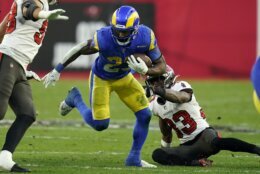 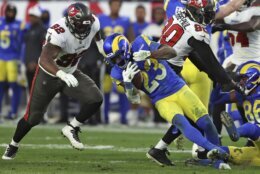 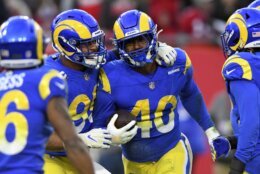 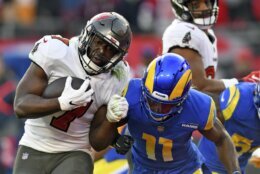 This time, though, the seven-time Super Bowl champion left too much time on the clock, giving Stafford a chance to create some playoff magic of his own.

Turns out, 42 seconds was just enough for the Los Angeles quarterback to pull off a Brady-like finish that sent the Rams to the NFC championship game for the second time in four seasons with a 30-27 victory over the Tampa Bay Buccaneers on Sunday.

“We knew it wasn’t going to be easy,” Stafford said. “I mean, we sure let ’em back in the game with a bunch of mistakes on offense. Our defense played outstanding. We’ve got to clean some stuff up, do a little better job in the turnover department.

“This is a tough team, man, this is what we’re all about. Just happy to get a win and keep on moving.”

Stafford threw for 366 yards and two touchdowns without an interception, and the team’s biggest offseason acquisition used a pair of long completions to NFL receiving leader Cooper Kupp to position the Rams for Matt Gay’s 30-yard field goal as time expired.

“Man, I’m still trying to process everything. That was a crazy game,” linebacker Von Miller said after the win over the defending Super Bowl champions. “I knew it was going to come down to the end. All the times that I’ve played Tom Brady, it always comes down to the end. No lead that we had was safe. I’m so proud of these guys. Everybody’s name was called and everybody answered the bell.

“Nobody was perfect, but we still found a way to win it.”

The Rams (14-5) will host next Sunday’s NFC title game against the San Francisco 49ers, aiming for a second trip to the Super Bowl in four seasons.

Brady rallied the Bucs from a 27-3 second-half deficit with help from three of the Rams’ four turnovers, tying the game on Leonard Fournette’s 9-yard run on fourth-and-inches with 42 seconds remaining.

The NFL’s all-time passer leader didn’t get an opportunity to finish the job.

And it’s uncertain if that was the final game for Brady, who’s undecided on retirement.

“I haven’t put a lot of thought into it,” said the 44-year-old quarterback, who led the league with a career-best 5,136 yards passing while also throwing for a league-high 43 TDs during the regular season.

Stafford, obtained in the offseason in a trade that sent Jared Goff to Detroit, led the Rams downfield after the ensuing kickoff, using completions of 20 and 44 yards to Kupp to set up Gay’s third field goal of the day.

“What an interesting game, what an amazing sign of resilience,” Rams coach Sean McVay said. “A lot of things didn’t go our way in the second half, but guys kept battling and found a way.”

Earlier, Stafford found Kupp wide open behind the Bucs secondary on a 70-yard scoring play that put Los Angeles up 17-3 early in the second quarter.

“Man, he’s the heart and soul of this offense,” Stafford said. “What he’s able to do down in, down out, whether it’s in the pass game, run game — he’s an unbelievable competitor.”

Stafford, who had never won a postseason game before beating Arizona in the previous week’s wild-card round, completed 28 of 38 passes without an interception. The 13-year veteran also scored on a 1-yard run.

Brady, meanwhile, completed 30 of 54 passes for 329 yards, one touchdown and one interception. He was sacked three times and lost a fumble.

Fournette also scored on a 1-yard run for Tampa Bay, which pulled within 27-20 on Brady’s 55-yard TD throw to Mike Evans, who made the catch with Jalen Ramsey in pursuit with 3:20 left.

“A lot of guys made a bunch of different plays to get us back into it,” Brady said. “We got behind. They made us pretty one-dimensional. We showed a lot of fight. But at the end of the day, when you lose a game you lose a game.”

The Bucs (14-5), who lost to the Rams for third time in two seasons, were trying to become the first team to repeat as Super Bowl champions since the Brady-led New England Patriots during the 2004 season.

Stafford completed nine of his first 12 passes for 176 yards and TDs to Kupp and Kendall Blanton to open a 17-3 lead early in the second quarter.

It was 20-3 at halftime, and the Bucs were fortunate their deficit wasn’t bigger. With the Rams on the verge of scoring again in the closing seconds of the second quarter, Cam Akers fumbled at the Tampa Bay 1 and Tampa Bay’s Antoine Winfield recovered to keep the defending champs to keep from falling farther behind.

The Rams built the lead to 27-3 on Stafford’s quarterback sneak, with help along the way from some uncharacteristic mistakes by the Bucs. That included unsportsmanlike conduct penalties on defensive tackle Ndamukong Suh for taunting and Brady, who was flagged while arguing unsuccessfully for what he felt should have been a penalty on the Rams for a hit that appeared to bloody his lip.

“He got in my face in an aggressive manner and used abusive language,” referee Shawn Hochuli told a pool reporter of Suh after the game. “As for the hit, we did not think that it rose to the level of roughing the passer.”

The Rams hurt themselves plenty, too, especially while trying to put the game away in the second half.

Kupp, who had nine catches for 183 yards, lost a fumble, and the offense failed to take advantage of Miller sacking Brady to a force a fumble at the Tampa Bay 25 when center Brian Allen snap sailed past Stafford in shotgun formation and recovered by the Bucs.

Finally, Suh forced a second fumble by Akers at the Los Angeles 30, giving Brady an opportunity to tie it in the last two minutes.

“We scratched and clawed. They kept giving us the ball and giving us chances,” Evans said. “We took advantage of them, just couldn’t get the stop at the end.”

Rams: Played without LT Andrew Whitworth, who was hurt during the wild-card round victory over Arizona.

Buccaneers: CB Carlton Davis left the field favoring his right shoulder late in the first half but finished the game. … Punt returner Jaelon Darden left with a possible concussion in the fourth quarter..

Buccaneers: Await word on whether the 44-year-old Brady will retire or return for a 23rd NFL season.