NASHVILLE, Tenn. (AP) — The Miami Dolphins had been winning so much the playoffs seemed an inevitability in coach Brian Flores’ third season.

Once their history-making seven-game winning streak ended, the Dolphins needed a lot of help to keep those hopes alive only to be eliminated Sunday before their flight home landed.

Tua Tagovailoa turned the ball over twice, once with the ball slipping out of his hands on a cold, rainy day, and the Miami Dolphins found themselves routed 34-3 by the Tennessee Titans to snap their seven-game winning streak Sunday.

The loss pushed the Dolphins (8-8) from seventh in the AFC as the last team in the playoffs to the outside, trailing at least the Los Angeles Chargers with the Las Vegas Raiders and Indianapolis Colts holding the final two wild-card spots available.

Once the Chargers beat Denver 34-13 late Sunday afternoon, that eliminated Miami along with Cleveland and the Broncos. And the Dolphins knew they came to Nashville likely needing two more victories to clinch a berth.

The Dolphins proved their resiliency by becoming the first team in NFL history to win seven straight after losing seven consecutive games. That run pulled them out of a 1-7 start to 8-7 before they ran into a team with the best record the Dolphins had faced down the stretch with the Titans now holding the AFC’s No. 1 seed.

The Titans sacked Tagovailoa four times and harassed him much of the game. His l ongest throw of 45 yards to rookie Jaylen Waddle came too late, and Miami couldn’t finish off that drive anyway before turning the ball over on downs early in the fourth quarter trailing 17-3.

Tagovailoa said one person not doing what’s needed can mess up the play. He finished 18 of 38 for 205 yards.

“Whether it’s me making a throw, the running backs running and finding the right lane, or the line blocking a certain way, the receivers’ routes, everything matters. Little things matter. It was just poor execution on our part.”

The Titans scored 24 unanswered points, 17 in the fourth quarter, to seriously damage the Dolphins’ playoff chances.

Miami defensive tackle Christian Wilkins said the Dolphins will do what they’ve done all season and stick together.

“It’s definitely unfortunate, though, because we’ve been experiencing a lot of winning lately, and we’ve been doing a pretty good job, but the recipe and the formula is still the same, 24-hour rule,” Wilkins said. “Flush this one and get back to work (Monday).”

The challenge for the Dolphins is they host the New England Patriots (10-6) who currently sit fifth in the AFC, with a chance still to win the AFC East if Buffalo loses to the visiting Jets.

Miami safety Brandon Jones, who played after being cleared off the reserve/COVID-19 list and traveling to Nashville separately from the Dolphins, was unhappy at how their defense played.

A unit that had been No. 1 in so many categories during the seven-game winning streak gave up 308 yards. The NFL’s top unit with 45 sacks coming in took down Titans quarterback Ryan Tannehill only once, and the Titans had a 2-0 edge in turnovers.

Miami also came in seventh against the run, giving up only 103.7 yards per game yet gave up 198 yards rushing as the Titans averaged 5 yards per carry with two touchdown runs.

“Just knowing how good we can be when we’re all playing on the same accord from offense, defense, (and) special teams, it’s always frustrating when things don’t go your way,” Jones said. 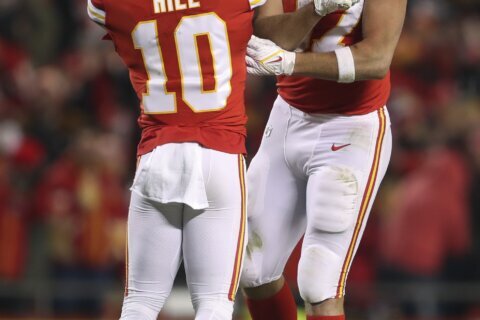