CHARLOTTE, N.C. (AP) — Matt Rhule heard the “Fire Rhule” chants from fans during the game, as well as the boos as he left the field Sunday following the Carolina Panthers’ sixth straight home loss and and 10th defeat in the last 12 games.

They were officially eliminated from playoff contention. The honeymoon period is clearly over as Rhule nears the end of his second double-digit loss season.

Carolina fans are growing restless with a team that seems to lack direction at quarterback.

Rhule has been searching for answers, even turning to a two-quarterback system on Sunday that included rotating Cam Newton and Sam Darnold, who returned to action after missing five games with a shoulder injury.

That didn’t work. The Panthers managed two field goals and were blown out 32-6 by the Tampa Bay Buccaneers, who clinched their first NFC South title since 2007 under the direction of seven-time Super Bowl champion Tom Brady.

“We’re not them yet; we’re aspiring to be them,” Rhule said.

Rhule went as far as to apologize to the team’s fanbase after the game for the constant losing, but promised he is “1,000% convinced” that the organization is headed in the right direction. He pointed to injuries to key players as one of the reasons for his team’s struggles.

“There is a process that is happening underneath and everyone is like, ‘It’s not working Matt, it’s not working Matt,’ But when I see all of the good things that are happening, I think it is,” said Rhule, who is in the second year of a seven-year, $60 million contract.

Rhule came up with the two quarterback approach last week saying he was looking for a spark. Newton started the game — possibly his last as a member of the Panthers at Bank of America Stadium — and threw an interception on his second series. He was replaced by Darnold, who was promptly booed as he ran on the field.

Newton never seemed to get into rhythm after that as he and Darnold rotated back and forth.

“It was told to me early on this week about playing two quarterbacks,” Newton said. “Did I approve of it? That’s not even a thought to me. As a player, you play. The coaches, they coach. If he deems that is what is best for this team to win, then it’s for me to swallow my pride and get on board. And I did that.”

Rhule wouldn’t say who will start next week at New Orleans, although it hardly matters with the Panthers eliminated from playoff contention.

The reality is Rhule has swung and missed three times now on quarterbacks — four if you include passing on Justin Fields with the No. 8 pick in the NFL draft.

The Panthers initially signed Teddy Bridgewater in 2020, but he was jettisoned after one season. Then they traded away three picks to get Darnold, who struggled after a 3-0 start this season. And then they acquired Newton, who has gone 0-5 as the team’s starting quarterback, in part prompting Rhule to fire offensive coordinator Joe Brady midway through the season.

So the two-quarterback system felt a lot like a desperate coach grasping at straws to find anything that will work.

Rhule said having coached in the Philadelphia area he didn’t mind hearing the boos from the fans. He said he appreciates their passion.

But he added the Panthers need to continue to build just as the Buccaneers did, a message that had the feel of a coach who was politicking to keep his job.

“That team (Tampa Bay) struggled for several years and acquired a lot of pieces and then Tom Brady showed up and Gronk showed up and Antonio Brown showed up, and now they are one of the best teams in the league,” Rhule said. “… We’re trying to add pieces as we go and develop guys and draft guys and sign guys — and we hope that we can get there.” 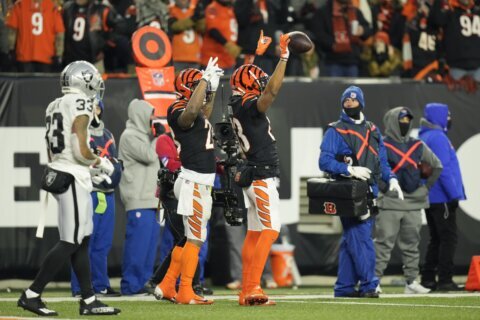 Officiating in Raiders-Bengals problematic at times 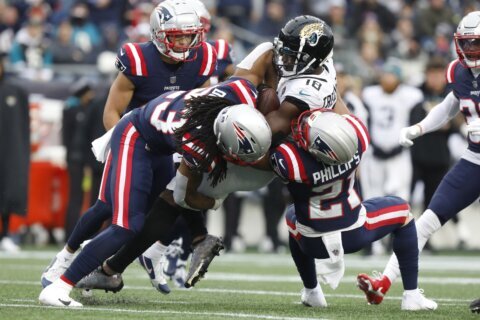