But Washington is getting back quarterback Taylor Heinicke.

Hill and Siemian were among nine players for New Orleans placed on the reserve/COVID-19 list. The others include such key players as safety Malcolm Jenkins and tackle Jordan Mills, who is expected to start Monday night against Miami.

The situation left Ian Book, a rookie out of Notre Dame who has been inactive for all 14 games, as the only active quarterback under contract. It appears Book is in line for his maiden NFL regular-season appearance. Running back Alvin Kamara has been the Saints’ emergency quarterback for several seasons and conceivably could take direct snaps as a wildcat threat.

The latest COVID-19 hit to the Saints came as New Orleans awaits the return of coach Sean Payton, who did not travel to Tampa Bay for the Saints’ victory has worked from home since testing positive for COVID-19 last Thursday. Saints defensive coordinator Dennis Allen has been serving as acting head coach.

Tretter posted on Twitter that he was experiencing symptoms and chose to be tested at the team’s facility in Berea, Ohio.

“Unfortunately, I am positive for COVID-19,” Tretter wrote. “I encourage all NFL players to take every precaution available to them to protect themselves, their families and their teammates from this virus.”

The Browns have been hit hard by a spate of positive tests in the past week and were missing 22 players, including Baker Mayfield as well as coach Kevin Stefanski, for Monday night’s rescheduled game against Las Vegas, which Cleveland lost.

On Wednesday, Tretter spoke to reporters for the first time in weeks and discussed the recent challenges for the NFL and players’ union to navigate the uptick in cases due to the omicron variant.

“It has been a trying week or two weeks for everybody,” Tretter said. “This is a new variant. When COVID first happened, we had six months to kind of figure it out and figure out a path forward. In this instance, we had about six days to figure it out.”

Tretter said he had received the vaccine booster, and had chosen to stay away from the facility as the team was conducting meetings virtually. He returned for Thursday’s practice and tested positive shortly before the Browns were scheduled to take the field.

The league relaxed some of its testing policies last week amid the outbreak among the Browns and other teams.

The Browns (7-7), who play at Green Bay on Christmas, got two more players back from the COVID-19 list as linebacker Grant Delpit and rookie offensive tackle James Hudson III were activated.

Stefanski returned to the team on Wednesday. Mayfield has yet to produce a required negative test. His 10-day quarantine period ends Saturday, and Mayfield is expected to play against the Packers despite not practicing for two weeks.

“If he’s healthy as he’s been and he’s cleared and ready to go, then I anticipate him playing,” Stefanski said.

— The Vikings added Cook, who already has his third straight 1,000-yard rushing season and is the only player in the NFL with 1,200-plus yards from scrimmage in each of the last three years. Cook has been following protocols for unvaccinated players. Alexander Mattison, who missed the previous game with COVID-19, has returned and will take over the lead role in the backfield.

— Washington’s Heinicke was activated off the COVID-19 list and was back at practice running the offense. Heinicke is expected to start Sunday night at the Dallas Cowboys after missing the game at Philadelphia while in virus protocol along with backup Kyle Allen.

Practice squad tight end Temarrick Hemingway also came off the list. Linebacker Cole Holcomb went into protocol Wednesday, and Washington is preparing to play without him.

With so many of Washington’s assistant coaches in COVID-19 protocol, coach Ron Rivera ran the scout team defense at practice. Rivera remained hopeful cornerback Kendall Fuller and others could be back in time to face the Cowboys.

— Houston placed six more players on the list, bringing its total to 22. Four starters — LT Tytus Howard, C Justin Britt, DT Roy Lopez and safety Eric Murray — were among them. The moves come a day after the team placed top receiver Brandin Cooks and kicker Ka’imi Fairbairn on the list. Houston signed kicker Dominik Eberle to the practice squad Thursday and could elevate him Sunday against the Chargers if Fairbairn can’t play.

— Jets backup quarterback Joe Flacco and right guard Laurent Duvernay-Tardif are the latest placed on the COVID-19 list. The Jets have 20 players on the active and practice squad rosters, including injured reserve, on the list. Coach Robert Saleh also tested positive Wednesday and could miss New York’s game Sunday against Jacksonville.

Mike White, who was recently activated from the list, will be the backup to Zach Wilson; Flacco is unvaccinated. Duvernay-Tardif is a licensed medical doctor who opted out last year to fight on the pandemic’s front lines. He’ll likely be replaced on the starting lineup by Greg Van Roten.

— The Falcons will be without DE Marlon Davidson against Detroit after he tested positive. Davidson, who had a pick-6 against Tom Brady earlier this month, was on the inactive list for last week’s loss at San Francisco with an illness.

— The Eagles placed DE Ryan Kerrigan on the list and elevated DE Cameron Malveaux from the practice squad to the active roster for the Giants game as a COVID-19 replacement.

— The Chiefs did not have any additional COVID-19 positives on Thursday but Pro Bowl defensive tackle Chris Jones returned to practice after a positive test caused him to miss last week’s game against the Chargers. The Chiefs still have 10 players on the list, including tight end Travis Kelce and wide receiver Tyreek Hill.

— The Titans will be without left tackle Taylor Lewan, who tested positive. 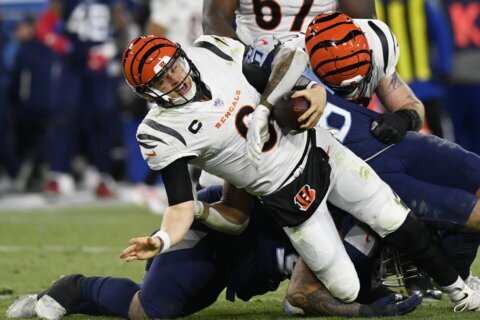