PITTSBURGH (AP) — Mason Rudolph believes he’s more comfortable, that the game which seemed so fast when the Pittsburgh Steelers backup quarterback filled in for an injured Ben Roethlisberger in 2019 has slowed down. That he’s capable of being a successful NFL starter.

Given a chance to show how far he’s come over the last two years on Sunday against Detroit —Roethlisberger went onto the COVID-19 list less than 24 hours before kickoff — Rudolph’s performance produced as many questions as answers.

The results were symbolic of a garish 16-16 tie that halted Pittsburgh’s four-game winning streak and did little to stamp the Steelers as legitimate contenders in what appears to be a wide-open AFC.

Steady at the start but sloppy at the finish and erratic everywhere in between, Rudolph completed 30 of 50 passes for 242 yards with a touchdown and an interception as Pittsburgh (5-3-1) failed to put away the NFL’s lone winless team.

“Some throws I want to have back,” Rudolph said. “I think the weather affected everybody out there a bit, but you’ve got to find a way to get it done, and we didn’t tonight. So we’ll take a look and try to fix those mistakes.”

They were numerous for Rudolph. He started off beautifully, taking the Steelers down the field on their opening drive before connecting with James Washington for a 9-yard touchdown.

Yet he had several passes that sailed over the heads of open receivers; one fell into the arms of Detroit’s Julian Okwara in Lions territory to snuff out a scoring threat. He spiked a pass to Ray-Ray McCloud at the goal line in the third quarter, forcing the Steelers to settle for a field goal. He fired a fastball to Diontae Johnson on a slant at the Detroit 48 with less than five minutes to go in a tie game; a changeup was all that was required.

“It was high and hot,” Rudolph said. “Those are throws I’ve got to make despite the weather conditions.”

There were moments, particularly with his legs, that Rudolph gave Pittsburgh’s offense a dimension Roethlisberger doesn’t. Rudolph ripped off runs of 26 and 11 yards during one third-quarter drive. Rudolph lowered his shoulder on one, sending Detroit safety Tracy Walker into the concussion protocol in the process.

“I think when there’s room there to call your own number, I enjoy that,” Rudolph said.

Rudolph’s inconsistency was hardly Pittsburgh’s only problem. He hit Johnson for a long gain in overtime, only to have Johnson fumble. Pittsburgh’s last-gasp drive ended when rookie tight end Pat Freiermuth let the ball squirt free while trying to get out of bounds.

“We all have things to correct,” Rudolph said.

The Steelers may have to do it without some familiar faces. Roethlisberger’s status for next Sunday’s visit to the Los Angeles Chargers is uncertain. So is star linebacker T.J. Watt’s after he exited with knee and hip injuries suffered when he chased down Jared Goff to boost his sack total to 12 1/2.

Guards Trai Turner and Kevin Dotson both went down with ankle injuries and veteran cornerback Joe Haden spent the second half on the sideline with a midfoot sprain.

The Steelers’ four-game winning streak came by a combined 18 points. — is gone. While head coach Mike Tomlin praised Rudolph for giving Pittsburgh a chance at pulling it out, Rudolph likely needs to be more than a caretaker for a team whose defense isn’t what it was a year ago.

The Lions bulldozed the Steelers for 229 yards on the ground, only the ninth time since 1970 that Pittsburgh has given up more than 200 yards rushing at home. The schedule over the second half of the season is daunting, beginning with a trip to the West Coast.

Maybe there’s a chance Roethlisberger is ready by the time the team plane leaves for Los Angeles. If Roethlisberger must sit out next week, Rudolph needs to be better. Not just in terms of the present, but maybe also the future. Both his and the team that has (sort of) hitched its wagon to him in the near term.

Rudolph is 5-4-1 in 10 career starts, serviceable but not spectacular at a place where Roethlisberger has made spectacular the norm for nearly two decades.

“We’ve got to make (Rudolph) look good back there,” Johnson said. “We’re going to do that this week at practice and get ready for Sunday.” 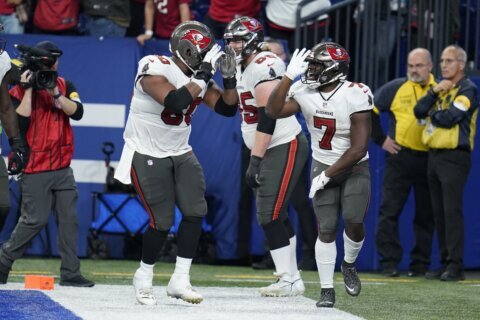