BETTING LINE: Cowboys by 7½, according to FanDuel SportsBook.

RAIDERS PLAYER TO WATCH: DE Yannick Ngakoue has all seven of his sacks in the past six games and is the only player in the NFL with at least seven in each of the past six seasons. Ngakoue had his 20th career forced fumble last week, tied with T.J. Watt and Khalil Mack for the most since the start of 2016.

COWBOYS PLAYER TO WATCH: LT Tyron Smith appears set to return after missing three games with an ankle injury. The Dallas offense had its two worst showings of the season in those three games, both losses. The Cowboys struggled in the run game against Denver and Kansas City, and Dak Prescott was sacked a season-high five times against the Chiefs.

KEY MATCHUP: Dallas RB Ezekiel Elliott vs. Las Vegas run defense. Elliott has been battling a right knee injury for several weeks, and is averaging just 44 yards per carry the past four games. Assuming the Cowboys have starting tackles Smith and La’el Collins together for the first time since the opener, they will try to get their run game on track against the NFL’s 29th-ranked rushing defense.

KEY INJURIES: Raiders LB Nick Kwiatkoski (ankle) and CB Keisean Nixon (ankle) are unlikely to play. … RB Jalen Richard (ribs) and G John Simpson (oblique) are also dealing with injuries but could play. … Cowboys WR CeeDee Lamb didn’t practice early in the short week after leaving the Kansas City game at halftime with a concussion, but he wasn’t being ruled out. … WR Amari Cooper won’t get to play against his former team after testing positive for COVID-19 last week. The Raiders traded Cooper in midseason 2018. … S Donovan Wilson (shoulder/chest) has already been ruled out by coach Mike McCarthy.

SERIES NOTES: The Cowboys can take the series lead for the first time with a victory. The series was 3-3 when the Raiders started a three-game winning streak in 1998. Dallas has answered by winning the past three, including Thanksgiving victories in 2009 and 2013.

STATS AND STUFF: The Raiders are 3-4 on Thanksgiving with the last win coming against Buffalo in 1968 in the AFL. … Las Vegas has lost three straight games following a 5-2 start. … During the skid, the Raiders rank last in the NFL in converting third downs on offense (21.4%) and 30th in stopping third downs on defense (53.5%). The Raiders are 2 for 16 on third downs the past two weeks. For the season, the Cowboys are holding teams to 32.2% on third downs, second in the NFL. … Las Vegas has been held to 16 points or fewer in five of the past seven games. … The Raiders had five turnovers in their first seven games and seven turnovers in the past three. … QB Derek Carr reached the 3,000-yard mark for his eighth straight season with the Raiders. The only other players to do that in their first eight years are Cam Newton, Russell Wilson and Peyton Manning. Carr needs 63 yards passing to become the fifth QB to reach 30,000 in his first eight seasons. … Las Vegas TE Darren Waller had a season-high 116 yards receiving last week and his 12 100-yard games are the most among TEs since the start of the 2019 season. … The Cowboys have lost to consecutive AFC West opponents (Denver, Kansas City) after beating the Los Angeles Chargers for their first victory in Week 2. … The Cowboys’ Prescott has 15 TDs with two interceptions for a 118.1 rating in five home starts this season. His 216 yards passing against the Chiefs were his fewest in a loss since a 13-9 defeat at New England in 2019. … Dalton Schultz is second among NFC tight ends with 44 catches and tied for third with 491 yards. … LB Micah Parsons needs half a sack to break DeMarcus Ware’s club rookie record of eight from 2005. … S Jayron Kearse had his second career interception against Kansas City and has at least five tackles in all 10 games. The sixth-year player had never had more than seven such games in an entire season.

FANTASY TIP: Elliott has 439 scrimmage yards in four Thanksgiving games and can join Hall of Famers Emmitt Smith, Michael Irvin and Barry Sanders as the only players with at least four games of 100-plus yards from scrimmage. The two-time rushing champion has seven TDs (six rushing, one receiving) in five home games this season. 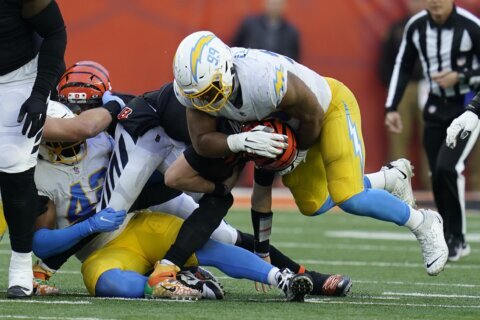 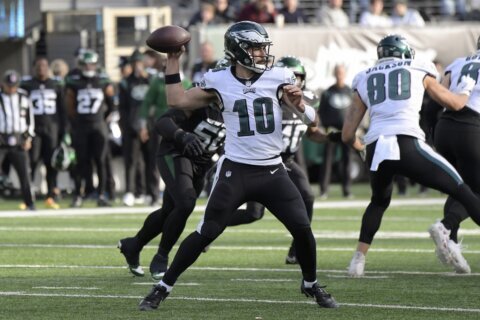