CLEVELAND (AP) — Baker Mayfield dragged himself to the postgame podium Sunday, limping on yet another injury he’ll need to get treated along with his damaged left shoulder and sore left foot for him to keep playing.

The Browns are just as banged up, and their issues seem more than physical.

An X-ray on the team might reveal some cracks that may not heal in time to salvage this season, which is in jeopardy of turning into one of the most disappointing in the franchise’s history.

A demoralizing 45-7 loss to the New England Patriots returned the Browns (5-5) to last place in the AFC North and was the latest example of Cleveland’s wild inconsistency and perhaps some deeper foundational troubles.

“We just did not do a good enough job in any area — playing, coaching or you name it,” coach Kevin Stefanski said Monday. “No one feels good about how yesterday went.”

From play to play, week to week, there’s no telling which Browns team will show up — the one which destroyed the Cincinnati Bengals just eight days ago, or the one that Bill Belichick made look silly.

There are problems everywhere, some fixable in the short term, others that could take more time.

Stefanski’s game planning and play calling have been erratic. Slowed by the injuries, Mayfield isn’t playing like a franchise QB nearly often enough and the Browns aren’t scoring (17 points or fewer in five of the past seven games).

And a rebuilt defense that seemingly turned the corner a week ago, was dissected by Belichick and his rookie quarterback, Mac Jones.

Making matters worse, Browns star end Myles Garrett seemed to call out embattled coordinator Joe Woods after the game when he said the defense didn’t make any adjustments on the sideline or field.

Stefanski chalked up Garrett’s sentiments to “frustration” and said he spoke to the NFL’s sacks leader about his startling comments.

“You give up 45 and you score seven, we just did not have a good enough plan. We did not make enough adjustments and we did not play well enough,” Stefanski said. “It is all the above when you get beat.”

But every team is dealing with injuries, and those don’t excuse missed tackles, pre-snap penalties, dropped passes or blown assignments.

With seven games left, the Browns have lost their margin for error.

“We’re in the playoffs now,” linebacker Anthony Walker Jr. said. “You want to be a playoff team? Your playoff just started earlier. So we’re a playoff team right now and we’ve got to play every game like it’s a playoff game, take every day like we’re preparing for a playoff game, and then we’ll see where the chips fall after that.

“But at the end of the day, no more talking. Let’s go play ball. And we’ll see where that leaves us.”

Not much, but Cleveland’s running game is at least something Stefanski can consistently count upon. However, one of the issues against the Patriots was his unwillingness to stick with the run after the Browns fell behind.

With New England up 14-7, Stefanski called five passes in six plays, the Browns punted and the Patriots scored again. Ballgame.

Pretty much everything. A new area of concern is Cleveland’s rushing defense, which has been ranked among the league’s best. The Patriots overpowered the Browns up front and rushed for 184 yards.

Thrust into the starting lineup again because of injuries, D’Ernest Johnson ran for 99 yards on 19 carries. The 25-year-old backup has shown his value to the Browns, and is putting together a nice resume if things don’t work out for him long term in Cleveland.

Mayfield’s latest uneven performance has raised more questions about whether he’s worthy of a contract extension. The league’s best quarterbacks raise the level of their teammates and find ways to win — or at the very least, be competitive.

Wide receiver Odell Beckham Jr.’s release was supposed to liberate Mayfield, who followed a solid outing at Cincinnati with another clunker.

Stefanski said Mayfield is “day to day” with a bruised right knee and that the team’s medical staff has ruled out any structural damage. … CB Troy Hill returned to Cleveland after being hospitalized overnight with a neck sprain he suffered while trying to make a tackle in the fourth quarter. … WR Anthony Schwartz and CB A.J. Green remain concussion protocol. … Stefanski had no update on Chubb or Hunt, who missed his fourth straight game.

6: The Patriots converted on their first six third downs and finished 7 of 9 as Cleveland’s defense couldn’t find its way off the field.

A chance to get back on track with a home game against the Detroit Lions (0-8-1), who managed to tie Pittsburgh. 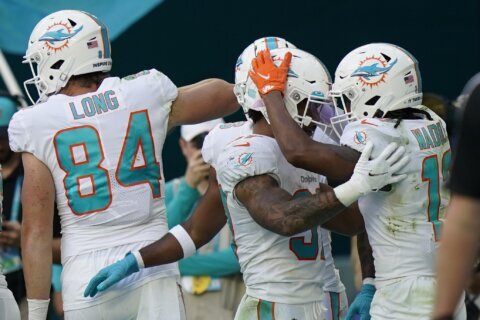 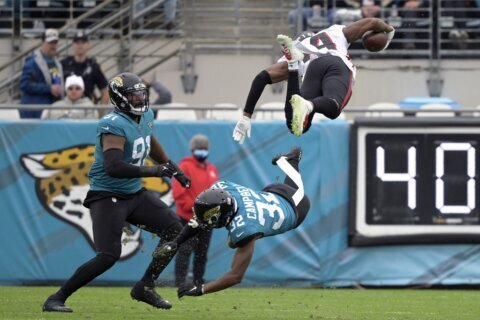