Flacco to get start at QB for Jets on Sunday vs. Dolphins

FLORHAM PARK, N.J. (AP) — The Mike White era is over almost as quickly as it began.

Joe Flacco will start at quarterback for the New York Jets on Sunday at home against the Miami Dolphins, a surprising decision by the 2-7 team that will be without injured starter Zach Wilson for the fourth straight game.

Wilson, the No. 2 overall draft pick, sprained the posterior collateral ligament in his right knee against New England on Oct. 24 and is still not 100%. White started the past three games in Wilson’s place, but the Jets decided to go with the 36-year-old Flacco this week against the Dolphins’ aggressive defense.

“You can’t take this game for granted,” said Flacco, who confirmed he’s not vaccinated and wore a mask during his news conference Wednesday. “I’m 14 years in and I want to play now more than ever.”

He’ll get at least one start, and it’ll be against a team the Jets think he matches up well against.

“One of the reasons we went and got Joe was for the experience part of it,” coach Robert Saleh said. “Not only for the playing ability and for the (quarterbacks) room, but also for situations just like this. Miami’s got a dynamic coverage system as it pertains to defense with (cover) zero and all the different coverages they run, and Joe’s kind of been there, done that.

“Just kind of a steadying experience that we thought would put us in the best position to win.”

Flacco got the news he will start from senior offensive assistant Matt Cavanaugh, as well as a text from Saleh. It came as many outside the facility assumed it would be White under center again.

“I don’t know if I’m surprised about anything in this league anymore,” Flacco said.

White, who’ll serve as Flacco’s backup Sunday, became a sudden celebrity with a terrific first NFL start in a win over Cincinnati while throwing for 405 yards and three touchdowns and set a league record for a player in his initial start with 37 completions. The performance landed White’s jersey and game ball in the Pro Football Hall of Fame in Canton, Ohio.

It also had some fans and media wondering if perhaps White — and not Wilson — could be the Jets’ long-term answer at quarterback.

But White lasted less than one quarter the following week at Indianapolis because of a bruised nerve in his throwing hand. And he struggled last Sunday in a 45-17 loss to Buffalo, throwing four interceptions against the NFL’s top-ranked defense.

White had the wind knocked out of him late in the game and was replaced on the Jets’ final drive by Flacco, who went 3 for 3 for 47 yards and a touchdown pass — the 225th of his career.

Still, it appeared White would continue to start as long as Wilson was sidelined, especially after Saleh said Monday he was fascinated by the New York/New Jersey media market and how people were quick to anoint him “the next coming after one game and now everyone wants to throw him away. He deserves better than that.”

But not enough to get one more start. Saleh said White expressed “a lot of disappointment” at the news.

“I want to be very, very clear on this one: My comments on Monday were because people wanted him out of New York,” Saleh said. “And what Mike has done in three weeks as a starter is proven to this entire organization, and in my opinion, to the entire New York fan base, that he is a capable quarterback who can play in this league and could do a lot of good things.”

While it doesn’t appear anyone was actually calling for the Jets to jettison White, there was some concern how he might be able to handle Miami’s defense. The Dolphins (3-7) have been impressive lately while winning two in a row, particularly in shutting down Lamar Jackson and the Baltimore Ravens in a 22-10 victory last Thursday night.

“Miami obviously presents a completely different challenge (for White),” Saleh said. “And you know, this is kind of what we brought in a guy like Joe for, situations just like this and his experience to be able to play systems of Miami’s caliber.”

The Jets acquired Flacco from Philadelphia on Oct. 25, sending a conditional sixth-round pick to the Eagles for the veteran. He spent last season in New York as a backup to Sam Darnold, and started four games. Flacco signed with Philadelphia as a free agent in the offseason, but didn’t play for the Eagles as Jalen Hurts’ backup.

“When you’re a backup and then you get traded, there’s all kinds of things that are running through your head,” Flacco said. “You want to go out there and you want to play. Not only that, you need to prove to yourself that you can play. All those things — a lot of emotions come up.”

NOTES: Flacco said he has “my reasons” for not being vaccinated, but declined to discuss them. The quarterback said talking about his views on the vaccine would be “a distraction” and he wants to focus on football. … DE Kyle Phillips was activated from the physically unable to perform list. … WR Denzel Mims remains in COVID-19 protocols after missing the game against Buffalo after testing positive for the coronavirus. … Wilson, LG Alijah Vera-Tucker (toe) and DT Nathan Shepherd (knee) were all limited, but Saleh said Vera-Tucker and Shepherd should be fine to play Sunday. 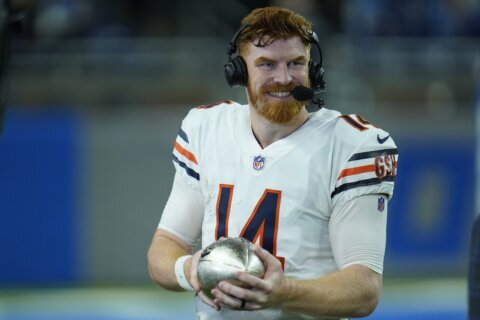 Bears to go with Andy Dalton as QB starter against Cardinals 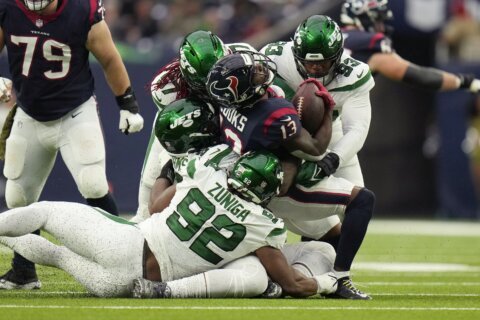 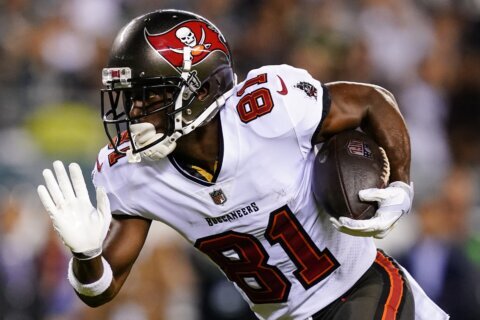 Analysis: Why Rodgers got fined and 3 Bucs got suspended