ATLANTA (AP) — Coming off one of the worst performances in franchise history, the Atlanta Falcons have only a few…
Listen now to WTOP News WTOP.com | Alexa | Google Home | WTOP App | 103.5 FM

ATLANTA (AP) — Coming off one of the worst performances in franchise history, the Atlanta Falcons have only a few days to turn things around.

If rookie coach Arthur Smith can’t get things fixed — and quickly — the Falcons could be in for another grim game against one of the NFL’s hottest teams.

Atlanta (4-5) was thoroughly embarrassed Sunday by the Dallas Cowboys, losing 43-3 in a de facto scrimmage that was over by halftime.

“I’ve got to do a better job of getting them prepared,” Smith said. “Clearly we weren’t prepared coming in here.”

The Falcons trailed 36-3 at halftime — the second-largest deficit in franchise history at the midway point of a game. The only time they were further behind at the break was in 1967, the team’s second season in the NFL, when they trailed Johnny Unitas and the Baltimore Colts 35-0.

“It falls on me,” Smith said “We’re lucky it only counts as one.”

Indeed, this performance was such a stinker, it probably deserves to be counted as two or three losses.

But the Falcons can’t fret for long, not with the streaking New England (6-4) headed to Atlanta for a prime-time game Thursday.

Led by rookie quarterback Mac Jones, the Patriots are on quite a roll. They extended their winning streak to four in a row with a 45-7 thrashing of the Cleveland Browns on Sunday.

Overall, they’ve won five of six, the only loss in that stretch coming to the Cowboys in overtime.

“We gotta flush it and get ready for Thursday,” Falcons defensive tackle Grady Jarrett said. “We gotta be better, get better, quick, fast, in a hurry.”

Not much. Younghoe Koo booted a 35-yard field goal to cap Atlanta’s first possession, but it was pretty much all downhill after that. We’ll give a nod to third-string running back Wayne Gallman, who produced the team’s two longest plays with a 17-yard run and 21-yard pass reception.

Where to begin? The Falcons managed only 11 first downs and 214 yards against the Cowboys, Quarterback Matt Ryan was awful, and he’s not getting any help from a no-name group of receivers. Stunningly, Atlanta’s wideouts combined for just four catches and 36 yards. The defense was shredded by Dallas’ dynamic attack, giving up four touchdown drives averaging 67 yards in the first half. Dak Prescott pretty much did as he pleased, completing 24 of 31 passes for 296 yards and two TDs. And let’s not forget the special teams, which gave up a blocked punt that accounted for Dallas’ final score in the first-half barrage.

Gallman could be in line for more playing time behind starter Cordarrelle Patterson after carrying 15 times for 55 yards, with a caveat that much of his production came in garbage time. Mike Davis had only four carries for 18 yards and dropped the only pass that was thrown his way.

Ryan is like the stock market — up one week, down the next. Coming off a dazzling performance at New Orleans, which earned him NFC offensive player of the week honors, Matty Ice had the lowest-rated game of his career. He completed just 9 of 21 passes for 117 yards with two interceptions, leaving him with a pathetic rating of 21.4.

LB Deion Jones. The Falcons tackling machine was largely invisible against the Cowboys. He had a couple of solo stops and three assists, leaving a gaping hole in the middle of a defense that is largely relying on Jarrett and cornerback A.J. Terrell to carry the load.

S Jaylinn Hawkins and TE Hayden Hurst both went down with ankle injuries and did not return. Neither has played a major role, but any loss hurts on a team with serious depth issues.

1-11 — The Falcons’ third-down conversion rate against Dallas. Might as well add they were 0 for 2 converting fourth downs, including a key stop early in the game when they probably should’ve just kicked a field goal.

3-28 — These numbers must be mentioned anytime the Falcons play the Patriots. Memories of that 2017 Super Bowl still linger in Atlanta.

Forget about the Dallas debacle as quickly as possible. While every setback can be a learning experience, the Falcons would be well-served to put Sunday’s rout in the rear-view mirror. Flush it, as Jarrett said. Smith will be looking to give his team a confidence boost during this short week, no doubt reminding his players that they had won four of six games before getting demolished by the Cowboys. Remember, things can change quickly in the NFL. 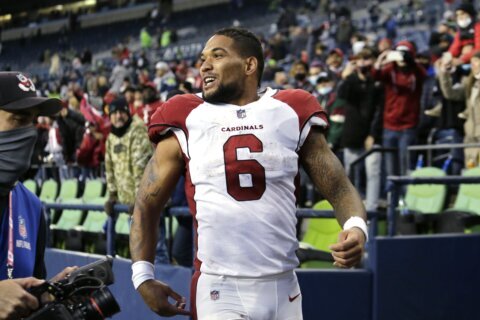