FLOWERY BRANCH, Ga. (AP) — Atlanta Falcons outside linebacker Dante Fowler Jr. returned to practice on Wednesday, opening the possibility he might come off injured reserve and play Sunday at Dallas.

Fowler was placed on injured reserve on Oct. 22 with a knee injury. He wore a brace on his left knee on Wednesday. He showed no sign of favoring the knee during the portion of practice open to reporters.

Fowler started Atlanta’s first five games and had two strip sacks. The two sacks still shares the team lead as the Falcons rank last in the NFL with only 11.

Given the glaring need to boost the weak pass rush, Fowler’s return against the Cowboys could be an important addition to the defense.

He had only three sacks in a disappointing 2020 season before agreeing to renegotiate his 2021 salary, accepting a cut from $14 million to $6 million. The Falcons then added incentives from $1 million to $4 million, based on his sacks total.

Fowler was excited for a fresh start on Atlanta’s new coaching staff, including defensive coordinator Dean Pees. He began training camp on the COVID-19 reserve list, but returned for a productive start to the season before the knee injury.

Fowler’s status for Sunday’s game likely will be determined in practice. Coach Arthur Smith wasn’t ready to say Fowler will come off injured reserve this week.

Fowler was designated to return to practice on Wednesday. The team still has 21 days to bring him back to the active roster.

On Tuesday, Atlanta released outside linebacker Jacob Tuioti-Mariner in an unexpected move. Despite being inactive for two games, Tuioti-Mariner shared the team lead with two sacks.

Despite the pass rush woes and struggles in their running game, the Falcons (4-4) have won three of their past four games. Perhaps most impressive was last week’s 27-25 win at New Orleans.

The release of Tuioti-Mariner came after outside linebacker James Vaughters, signed to the active roster on Nov. 2, had a sack against the Saints.

The Falcons signed cornerback Lafayette Pitts to the practice squad on Wednesday. Pitts has played in a combined 40 games with the Dolphins, Bills, Jaguars, Colts and Steelers. 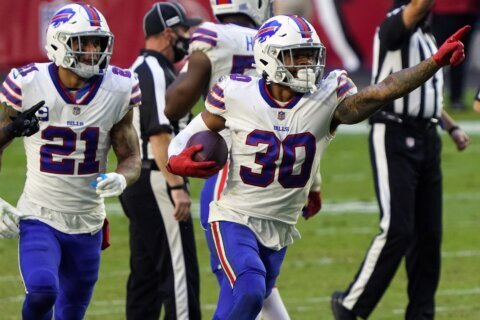