HENDERSON, Nev. (AP) — DeSean Jackson said the first time he attended an NFL game, as a fan around 7 or 8 years old, the Kansas City Chiefs were visiting the Raiders in Oakland.

Ever since then, he wanted to play in the NFL.

The Raiders’ new wide receiver will get his first taste of the AFC West rivalry as a player when the Chiefs visit Las Vegas on Sunday night.

“Putting on the black and the silver, it’s definitely gonna be special,” Jackson said after practice on Wednesday.

Jackson was released last week by the Los Angeles Rams and signed with Las Vegas on Monday. The speedy 14-year veteran hopes have an immediate impact for an offense that stalled last week in a 23-16 loss to the New York Giants.

“I’m not asking to get the ball 100 times, I’m not asking to play 100 percent — whatever that role is that fits, just let me play it to the best of my ability,” said Jackson, who has led the league four times in yards per reception. “Being that spark, what I’ve been able to do my whole career. Deep threat, vertical threat … if it’s being a decoy opening it up for other guys, (Darren) Waller, Huner (Renfrow), whatever it is I need to do to be a spark that’s what I’m here for.”

The Raiders had a need at receiver after the team released Henry Ruggs III, who last week slammed his car into another vehicle, leading to the deaths of a woman and her dog. Police said Ruggs was drunk and he faces decades in prison.

Las Vegas also cut another first-round draft pick, cornerback Damon Arnette, after he was seen threatening someone with a gun in a video posted online.

Attempting to move on following the turmoil, the team signed the well-traveled Jackson, who joins his sixth organization.

Jackson was targeted 15 times with the Rams and had eight receptions for 221 yards and one touchdown. Three of his catches went for 40 yards or more.

Prior to Sunday’s loss, 114 of quarterback Derek Carr’s 180 completions went for 10 or more yards, an average of 16.2 per game. But only nine of his 30 completions against the Giants went for 10 yards or longer.

Carr said Jackson should be able to stretch the field as the Raiders continue their playoff push.

“He’s very fast. He can still run,” Carr said after practice. “And that definitely showed up today.”

Bisaccia said he wasn’t sure how much of the playbook Jackson could learn in time for Sunday, but was confident he’d find productive ways to use him against Kansas City.

“I thought him and the receivers really had a good practice today,” Bisaccia said. “We put him in a couple of different spots, see if we can get some packages worked out, but I thought he had some fun out there and he looked fast.”

Jackson said watching close friend Nelson Agholor play for the Raiders last season made him feel “very confident that Derek Carr will be able to get the ball down the field” to him.

The three-time Pro Bowler said playing alongside a veteran quarterback like Carr and joining a playoff contender were motivating factors in signing with Las Vegas.

“It’s really not about myself at this point,” Jackson said. “Playing this long, and having a career like I’ve had, just fitting in a situation where it’s a winning culture. For me, the accolades, the stats are there. I really want to win and chase a Super Bowl. And I think it’s a great fit here.” 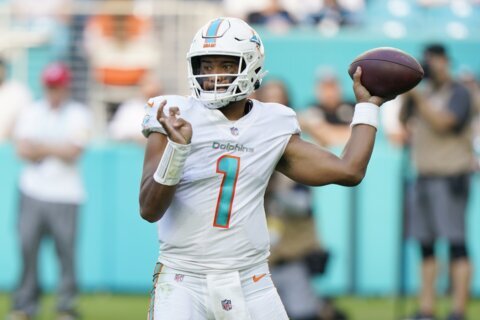 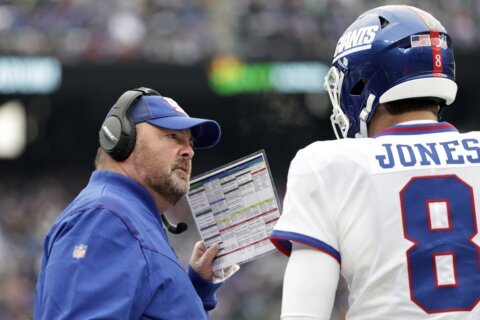