FOXBOROUGH, Mass. (AP) — Tom Brady’s legacy is forever steeped in each of the six Super Bowl championship banners he had a part in hanging above New England’s Gillette Stadium.

Yet, he might as well be playing in front of a mirror when he returns to face the Patriots.

Everything will be in reverse.

“I know that home locker room. I know that home tunnel. I know which way the wind blows. I know everything about that,” Brady said this week. “So, in some ways it’ll be unique. I’ve never had that experience. New England will be the first time for me being on the other sideline.”

Brady will be back in Foxborough on Sunday night to meet the Patriots for the first time since he left after 20 seasons to join the Tampa Bay Buccaneers. He’ll be opposite not only former coach Bill Belichick, but past teammates who have also never taken an NFL field and looked across at Brady wearing another team’s jersey, let alone ever had a chance to tackle him.

While they all have played against former teammates before, the Patriots acknowledge this time is much different. None of those other players has the institutional knowledge Brady does of their defensive schemes or tendencies.

It makes the margin for error minute against a quarterback who is a master at getting the ball out quickly and reading and deceiving defenses with his eyes.

“It’s gonna be a guy that he’s gonna know a lot of what we do,” said veteran safety Devin McCourty, who won three Super Bowls with Brady. “So what we do, we’ve gotta do a good job of. We have to play our best football.”

This 44-year-old version of Brady is still playing at a high level after taking the Bucs to a Super Bowl title last season. He leads the league this season with 10 touchdown passes and his 362.3 passing yards per game are second to Las Vegas’ Derek Carr.

Tampa Bay’s 34.3 points per game are also tied for tops in the NFL, thanks largely to one of the most stacked offenses in the league that includes receivers Chris Godwin and Mike Evans.

“This is one of those weeks where we can’t have a bunch of ‘my bads,’” McCourty said. “We gotta be on.”

At least New England won’t have to worry about Rob Gronkowski, another old friend. The tight end, who teamed with Brady on so many big plays over the years with the Patriots, is out because of a rib injury.

As much as Brady knows the Patriots, they also know him. But Belichick, 8-11 since Brady’s departure, said it doesn’t mean they will reinvent themselves this week.

“Certainly, Tom has an intimate knowledge of everything that we do here, more so than any other player in the league by far. So, I’m sure he’ll use it to his advantage. I would expect him to,” Belichick said. “I don’t think it would be in our best interest to go in there and do everything differently than we’ve done it all year. What we need to do is continue to do the things we do and do them better. That would help us more than anything else.”

A victory would make Brady the fourth quarterback with wins against all 32 NFL teams, joining Brett Favre, Drew Brees and Peyton Manning. With 68 yards passing Brady will surpass Brees’ mark of 80,358 yards, most ever in the regular season. It would add to his long list of NFL records that already includes most TD passes (591), most wins as a starting quarterback (232), most Super Bowl titles (seven), and most conference championships (10).

For all the talk about what Brady’s arrival in Tampa Bay did for the offense, the defense has been a big part of the team’s success, too. In addition to leading the league in rushing defense each of the past two seasons, the Bucs have had one of the league’s most effective pass rushes since Todd Bowles was hired as coordinator in 2019.

Linebacker Shaquil Barrett topped the NFL with 19 1/2 sacks two years ago and finished with eight during the regular season in 2020. He has one through three games this year, none the past two weeks.

As a team, the Bucs are last in the league with three sacks.

“I think Todd knows and Shaq knows it’s time to get to the quarterback,” coach Bruce Arians said. “Just one sack is not good enough.”

Arians is noted for his success working with quarterbacks over a long career as a NFL assistant and head coach. Manning, Ben Roethlisberger, Andrew Luck, Carson Palmer and Jameis Winston are among the high draft picks Arians mentored over the years.

The coach, who turns 69 on Sunday, likes what he’s seen so far from New England rookie Mac Jones.

“I loved him coming out. He’s smart, a pocket player who’s going to get the ball out, and he’s very accurate,” Arians said. “Obviously, pressure doesn’t bother him. He played in some big games (at Alabama). He led his team to the championship so, yeah, he’s legit.”

Gronkowski spent nine seasons with the Patriots and ended his tenure with 521 receptions for 7,861 yards and 79 touchdowns, the most receiving TDs in franchise history.

But a person familiar with the situation said Saturday that Gronk did not travel with the Super Bowl champions for his anticipated return to New England. The person spoke to the AP on condition of anonymity because Gronkowski’s status had not been updated by the team.

Gronkowski, 32, was listed as doubtful on Friday. It’s the first game he has missed since he came out of retirement to play alongside Brady with the Buccaneers.

Gronkowski had 45 receptions for 623 yards and seven touchdowns in his first season with Tampa Bay, and then caught four more TD passes from Brady during the team’s 2-1 start this year. 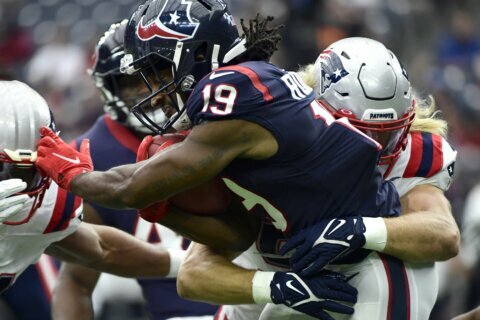 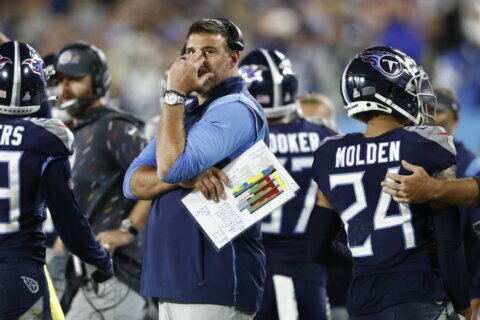 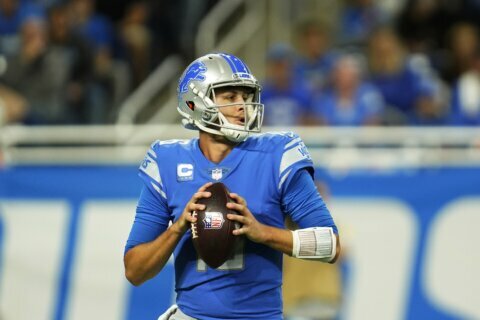