INGLEWOOD, Calif. (AP) — A slow start is becoming a familiar predicament for the Las Vegas Raiders, who have fallen behind by two touchdowns in three of their four games this season.

But a delayed kickoff because of a lightning threat — at a stadium with a roof?

That was a novel source of lateness for coach Jon Gruden and his Raiders before they faced the Los Angeles Chargers on Monday night.

“It was almost like, what in the world is going on?” receiver Hunter Renfrow asked. “I mean, we’re in a dome, right? I bet you if you polled everybody in here, nobody would have guessed you could have a lightning delay. But obviously they responded better than we did to it, or we wouldn’t have come out and played the way we did in the first half.”

Indeed, the Raiders (3-1) still struggled to catch up when they finally got on the SoFi Stadium field after the lightning threat passed in the Southland.

They were down 7-0 after Los Angeles’ opening drive, and they trailed 21-0 at halftime after managing a paltry 51 yards of offense — the Raiders’ worst first half since Gruden’s return in 2018 — offset by 53 yards in penalties.

Two lengthy scoring drives to open a strong third quarter weren’t enough of a rally to save Las Vegas from its first loss of the season, 28-14 to its AFC West rivals.

Instead of fashioning another dramatic ending in a season already featuring two overtime victories, the Raiders were powerless to stop the Chargers from salting away a comfortable win.

“If anything, hopefully this wakes us up a little bit,” said Derek Carr, who passed for a season-low 196 yards and two TDs. “I think we need to start a lot faster, if I’m honest. We started the season great, but we don’t start games nearly good enough yet.”

The Raiders have been outscored 56-31 in the first half this season, including 28-5 in the first quarter. Those numbers are alarming, but Gruden was particularly dismayed by this slow start, repeatedly calling it “ridiculous.”

It could have been even worse, but Renfrow made one of the best heads-up plays in recent NFL history when he sniffed out a fake punt late in the first quarter and roared up from his position as the returner to blow up a pass from Ty Long to Tevaughn Campbell.

“We had penalties that were ridiculous,” Gruden said. “We gave up some plays in the passing game today that you can’t give up. We didn’t play well in the first half. … We fought back and put ourselves in a position to make a dramatic comeback tonight. We just didn’t make the plays.”

Las Vegas’ first 3-0 start since 2002 ended at SoFi Stadium in front of thousands of silver-and-black-clad fans from the Raiders’ bountiful fan base in the Los Angeles area. Although the stadium rocked for the Raiders, the Chargers’ fans had much more to cheer outside the third quarter.

The Raiders’ potential tying drive was stopped at the Chargers 34 with 10:38 to play when a short pass, a short run and a sack of Carr short-circuited another good-looking drive. Carr said the third-down sack was a fluke partly caused by tight end Darren Waller beating his man so badly that it left his Chargers defender standing in the window where Carr wanted to throw to Renfrow.

“So I went to Waller, but by the time I was going through my progression, I tried to scramble, and it was too late,” Carr said.

Daniel Carlson missed a field goal attempt, and the Chargers drove for the decisive touchdown.

The Raiders have little time to dwell on this setback with a short week of preparation for a visit from Chicago (2-2) on Sunday. Carr apologized to the Raiders fans who cheered them in Inglewood and vowed to do better in Las Vegas.

“Coming here, it wasn’t really a hostile place,” Carr said. “It was more of a home game, just like we thought it would be. For us to just keep going forward, we just need to be consistent. … The expectation never changes. The expectation is to win every game. We didn’t do that today, and that’s all my fault.” 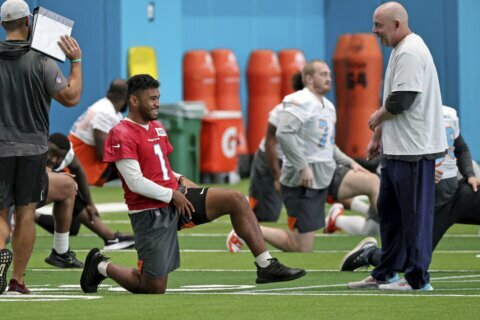 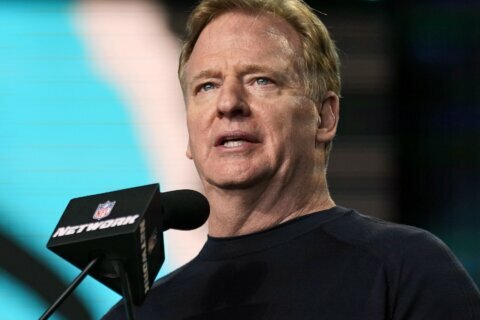