Jones not worried about offensive mates for Giants

Jones has spent most of the season playing without at least one or two of his top players. Last week four of them were missing in a 25-3 win over the Carolina Panthers.

Whether Barkley, Golladay, Shepard and Toney return this week is uncertain. With New York (2-5) playing a Monday night game in Kansas City, coach Joe Judge did not have to post an injury report Wednesday.

Golladay (knee) walked on the practice field with a long elastic wrap on his right leg. Barkley had a distinct limp with his right ankle still achy after being hurt against Dallas on Oct. 10. After returning from a two-week absence because of a hamstring injury, Shepard missed last week after aggravating the hamstring.

Toney has dealt with a number of issues in his rookie season and the latest was an ankle injury against the Rams on Oct. 17. The first-round draft pick did not practice last week.

Jones said the players’ return is up to the medical personnel and the coaches, adding they are all trying to get back.

That’s forced Jones to play with a new group of skill players. Devontae Booker has taken over at running back and the receivers last week were led by Darius Slayton — returning from a hamstring injury — Dante Pettis and John Ross, and tight ends Evan Engram and Kyle Rudolph.

“Yeah, I’m looking forward to it, for sure – all those guys,” Jones said of the return of his stars. “But we’ve had a lot of guys step up and play great for us. We’ll keep working.”

For the most part, the Giants’ game plans are based on who’s available week to week.

“The good news is we have a lot of stuff for those guys if some of those guys can get back,” Jones said of the injured. “Stuff we’ve done in the past, stuff we’ve repped, and just things that are a part of our offense. It’s about moving guys around and putting guys in different positions based on who’s available.”

While that might not be the best scenario for a quarterback, Jones is having his best season as a pro. The third-year quarterback, the No. 6 overall pick in 2019, has thrown for 1,727 yards with five touchdowns and four interceptions. The first pick was on an end-of-half Hail Mary against Washington, and the other three were against the Rams in his first game since sustaining a concussion the week before against Dallas.

Judge said he will know more about the injured players after watching them Thursday.

As far as a game plan, he expects to come up with something that suits his team. Controlling the line of scrimmage and the ball might help slow down Patrick Mahomes and the Chiefs. Matching the high-scoring Chiefs point for point would be tough with the injuries.

“You have to have enough flexibility in your game plan as you put it together early in the week,” Judge said. “As we get closer to the game, we can lean one way or another without really changing it, that players feel like it’s too much. Sometimes you get in the flow of the game and the game goes completely different than what you planned all week.”

In other words, be ready to adjust.

Jones has done that all season and his biggest weapon has been his legs. He leads the team in rushing with 229 yards, No. 3 among NFL quarterbacks this season.

“I think they’re a good defense, but you’re always trying to attack different parts of what a team does based on their scheme and what they’re doing,” Jones said of the Chiefs. “So like any week, we’ll prepare to do that.”

NOTES: One of the last things the Giants did at practice Wednesday was sing ‘Happy Birthday’ to running backs coach Burton Burns. He turned 69. … PK Graham Gano was selected the NFC Special Teams Player of the Week after making field goals of 49, 53 and 44 yards against Carolina, his old team. … Judge wants safety and punt returner Jabrill Peppers to travel with the team when he can. Peppers, who is in a contract year, ruptured an ACL on Sunday. A team captain, he will not play again this season. 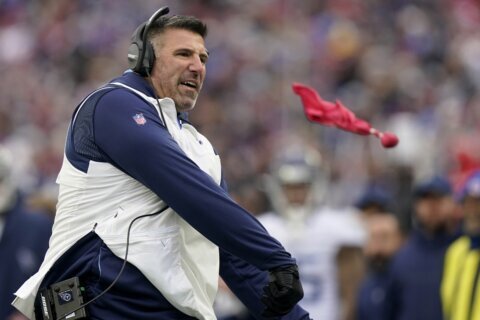 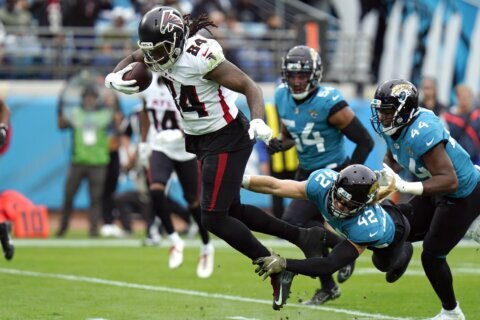 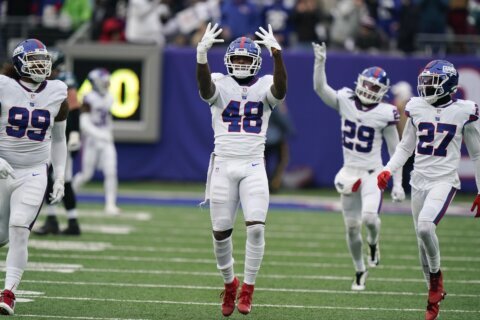