The NFL has been highlighting the big number of late comebacks, overtimes and last-minute finishes so far this season. There…
Listen now to WTOP News WTOP.com | Alexa | Google Home | WTOP App | 103.5 FM

The NFL has been highlighting the big number of late comebacks, overtimes and last-minute finishes so far this season.

There also has been a increase in blowouts — with last week one of the most lopsided the league has seen in years.

Cincinnati, New England, the Giants, Tennessee, Tampa Bay and Arizona all won by at least 22 points on Sunday as more than half of the games that day were blowouts.

There have been 21 games so far decided by more than 21 points, tied for the second-most since the merger through seven weeks. Only the 2009 season had more with 23. The NFL averaged less than 13 of these blowouts in the first seven weeks in the past six seasons.

When it comes to nail-biters, there have been 24 contests decided by a score in the final minute, 11 OT games and 29 wins by teams that trailed at some point in the fourth quarter.

Half of the division leaders are teams that didn’t make the playoffs in 2020, led by the NFL’s sole remaining undefeated team in NFC West-leading Arizona. The Cardinals (7-0) last made the postseason in 2015.

AFC North leading Cincinnati (5-2) also hasn’t made the playoffs since 2015, and finished last in the division the previous three years. In 16 of the past 18 seasons, a team has gone from last to first.

The droughts for two other division leaders are slightly shorter, with the AFC West-leading Raiders seeking their first playoff bid since 2016 and the NFC East-leading Cowboys (5-1) looking to get back for the first time since 2018.

At least two teams have won their divisions the season after missing the playoffs in 17 of the last 18 years.

The Cardinals and Green Bay Packers head into their Thursday night game on impressive streaks. The Cardinals have won seven straight, while the Packers have won six in a row since a season-opening loss to New Orleans.

This marks the first time since 2018 when the Rams played the Saints that both teams entered on winning streaks of at least six games. The Saints won that game, but lost the rematch in the NFC title game that season.

The Saints won 10 straight after losing their opener that season. The Packers are chasing that with six straight, becoming the 11th team since the merger to following a season-opening loss with at least six straight wins.

Miami and Houston are going the other direction with six straight losses after winning in Week 1, becoming the 24th and 25th teams to do that since the merger. The only other time in the past 33 seasons that two teams did that came in 2003, with Detroit and Atlanta.

Rookie receiver Ja’Marr Chase is doing his best to settle the debate about whether the Bengals made the right choice to draft him fifth overall instead of an offensive lineman.

The 21-year-old Chase had eight catches for 201 yards and a TD last week against Baltimore, becoming the second-youngest player to record a 200-yard receiving game. Mike Evans did it ay age 21 years, 87 days old — 150 days younger than Chase.

Chase did set a record with his 754 yards receiving so far this season, the most ever for a player in his first seven games, 69 yards more than Harlon Hill had in 1954.

Pitts’ 471 yards receiving broke Mike Ditka’s mark of 444 for the most by a tight end in his first six games.

Carr completed 31 of 34 passes for 323 yards against Philadelphia.

Carr’s 91.2% completion rate is the second-highest by a quarterback in a game with at least 30 attempts, trailing only Drew Brees’ 96.7% against the Colts in 2019. 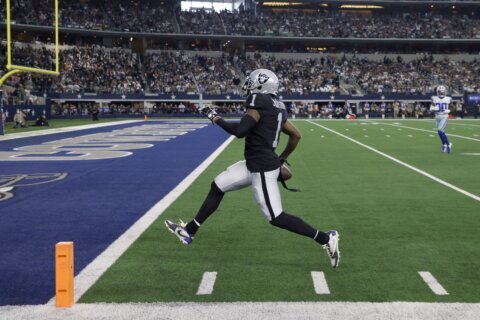 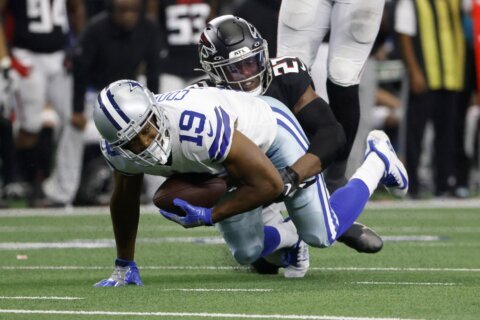