Bengals, Lions aim to bounce back after losing on late kicks

DETROIT (AP) — The Detroit Lions and Cincinnati Bengals have been on the wrong side of NFL history so far…
Listen now to WTOP News WTOP.com | Alexa | Google Home | WTOP App | 103.5 FM

DETROIT (AP) — The Detroit Lions and Cincinnati Bengals have been on the wrong side of NFL history so far this season.

The Lions became the first team to lose two games in the same season on game-winning kicks of 50-plus yards with no time left, and they did it in a three-week span.

The Bengals (3-2) were part of the first game marred by three potential winning field goals that were missed in the fourth quarter or overtime.

On Sunday at Ford Field, both teams get a chance to bounce back from a deflating defeat.

Detroit (0-5) may not be favored to win any of its remaining games, leaving open the possibility that the franchise has the first 0-17 season, 13 years after enduring the NFL’s first 0-16 season.

“This is not going to be a cakewalk,” Higgins said. “The record says 0-5. They obviously lost by game-winning field goals and things like that.”

Detroit dropped its latest game when Minnesota’s Greg Joseph made a 54-yard field goal with no time remaining. In Week 3, Baltimore’s Justin Tucker connected on a league-record, 66-yard field goal as time expired.

Even though coach Dan Campbell is in his first year leading the franchise, he knows a lot of its fans have been suffering through a lot setbacks for several decades.

“Nothing I’m going to tell them is going to make them feel any better,” Campbell said. “All I can do is try to prove it.”

Cincinnati’s rookie kicker, Evan McPherson, is eager to prove he can do the job after missing field goals late in regulation and in overtime against the Packers.

Bengals quarterback Joe Burrow is expected to play after having a precautionary trip to the hospital after last week’s loss to the Packers. The second-year quarterback got hit in the throat at some point and it affected his ability to talk. Burrow, who is playing on a surgically repaired left knee, has been sacked an average of three times per game in his career.

The biggest hit Burrow took against Green Bay appeared to be when he ran on a third-and-long and was tackled by two defenders. Cincinnati coach Zac Taylor told Burrow he should not have put himself in that position.

“He wants to help the team get first downs,” Taylor said. “But at the same time that’s part of protecting our football team as we need him out there playing and not exposing himself to some unnecessary hits.”

Lions quarterback Jared Goff is averaging just 6.6 yards passing per attempt, his lowest since he was a rookie with the Los Angeles Rams in 2016, to rank No. 25 in the NFL.

Goff’s shaky accuracy, getting sacked nearly three times a game and a lackluster group of wide receivers have contributed to the problem.

“I’m trying to find the guy who’s open every play,” Goff bristled. “If that happens all the way down the field, that’s the guy. If it’s not, then it’s not.”

Bengals running back Joe Mixon had just 10 carries for 33 yards last week as continued to recover from an ankle sprain, and is expected to be busier at Detroit.

“He has good energy and seems to be moving around pretty good,” Taylor said.

Mixon missed most of last season with a foot injury.

Lions linebacker Charles Harris is playing as Miami hoped he would have after drafting him with the No. 22 pick overall in 2017.

Harris already has a career-high four sacks, surpassing the total he had over three seasons with the Dolphins. His four-game sack streak is tied for the longest in team history.

Harris, Chicago’s Khalil Mack and Carolina’s Haason Reddick are the three NFC linebackers with a sack in four games this season.

Campbell was just getting into coaching a little more than a decade ago, when he met Taylor, who was a graduate assistant for then-Texas A&M coach Mike Sherman.

“I quickly learned like, ‘OK, this kid’s pretty sharp,'” recalled the 45-year-old Campbell, who is seven years older than Taylor. 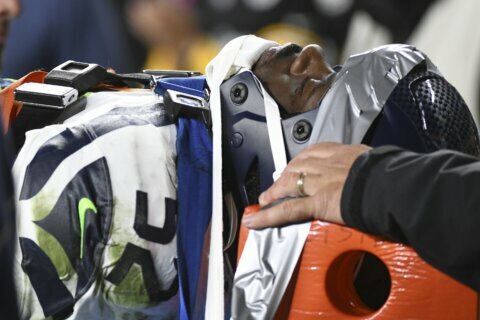 Scans come back clear on neck of Seattle’s Darrell Taylor 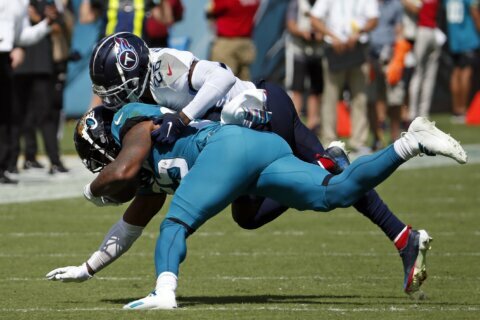