CHICAGO (AP) — Between the gut punch they absorbed two weeks ago and the beatdown that followed, it sure hasn’t…
Listen now to WTOP News WTOP.com | Alexa | Google Home | WTOP App | 103.5 FM

CHICAGO (AP) — Between the gut punch they absorbed two weeks ago and the beatdown that followed, it sure hasn’t been an easy stretch for the Chicago Bears.

They had Aaron Rodgers screaming at their crowd and Tom Brady burying them.

The Bears enter their game against the struggling San Francisco 49ers at Soldier Field on Sunday trying to steady themselves after back-to-back losses to teams with two of the best quarterbacks to play the game.

Coach Matt Nagy thought his team was in a good spot following a meeting Saturday at the hotel, only to watch the Bears (3-4) get pummeled 38-3 at Tampa Bay in their most lopsided loss in seven years.

“I just thought it was a good opportunity right there just to kind of speak from the heart a little bit from where I’m at as a head coach and where we’re at as a team and where we want to go,” Nagy said. “And I think that’s very important to do that, is to have those every once and a while.”

Whatever was said in the meeting didn’t translate to success on the field.

Rookie quarterback Justin Fields committed five turnovers, the offensive line got dominated and the Bears got pummeled in their most lopsided loss since a 55-14 blowout at Green Bay in 2014.

It was another embarrassment for a team that delivered one of the worst offensive performances in NFL history with 47 yards at Cleveland last month. And it came on the heels of yet another loss to Green Bay, punctuated by Rodgers screaming, “I still own you! I still own you!” to the crowd at Soldier Field after running for a late touchdown.

San Francisco is struggling, too. The 49ers (2-4) have dropped four straight since opening with wins at Detroit and Philadelphia.

Quarterback Jimmy Garoppolo committed three of the team’s four turnovers in a 30-18 loss to Indianapolis last week. But coach Kyle Shanahan said he would stick with the veteran even if rookie Trey Lance is healthy. The No. 3 overall draft pick missed last week because of a sprained left knee.

San Francisco’s offense the past few weeks has been hampered by poor play on third down with a league worst 16.7% conversion rate over the last three games. The Niners were 1 for 11 last week against the Colts, leading to five straight drives without a first down in the second quarter. That prevented the offense from getting into any rhythm.

“When you get a first down, you get to call more plays,” Shanahan said. “I think we went five-and-out. We had three-and-out like five times in a row, we went 1 for 11 on third down, so you don’t get to do all that.”

The Bears are banking on Fields to bounce back.

The No. 11 overall draft pick threw three interceptions and lost two fumbles while getting sacked four times behind a shaky line last week. He has been taken down 22 times for 179 yards, both league highs.

Penalties have been a major problem for the Niners, with a league-worst 80.8 penalty yards per game. The biggest issue has been on pass interference calls as their defensive backs have been frequently caught on infractions downfield. San Francisco had five pass interference penalties last week and a league-worst 14 on the season, including three that were declined or offset. The 11 accepted penalties have given opponents 250 yards, the most in the league.

“We still have to be in position to go out there and fight against the opposition,” cornerback Josh Norman said. “It starts in practice and we’re going to rep it. Now it’s starting to be a problem.”

The Bears have been dealing with COVID-19 issues. The latest was Nagy announcing Monday he tested positive. With Nagy out, special teams coordinator Chris Tabor will serve as head coach against the 49ers.

Chicago had four players on the COVID-19 list for last weekend’s game, with linebacker Caleb Johnson and right tackle Elijah Wilkinson joining star linebacker Robert Quinn and veteran tight end Jimmy Graham before kickoff. Running back Damien Williams was removed from the list a day before the game. The Bears will have Quinn, Johnson and Wilkinson back, but placed injured tackle Germain Ifedi on the COVID-19 list.

The Bears are the only team in the league averaging more yards on the ground (131) than in the air (124.4). They’re sixth in rushing, but last in both passing and total offense.

“I think that’s stuff we’re trying to get figured out,” Robinson said. 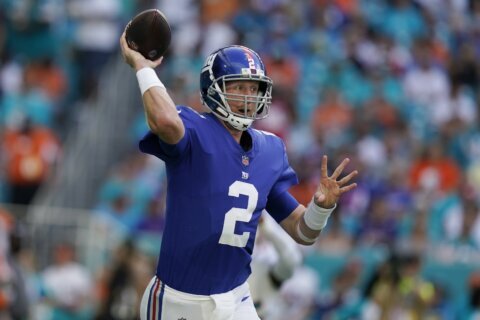 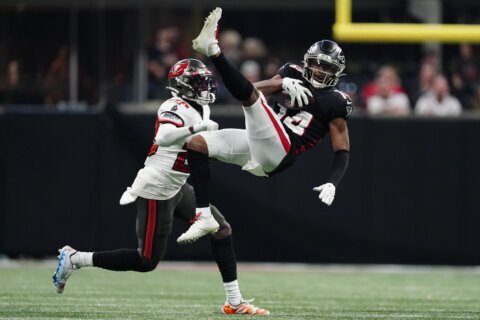 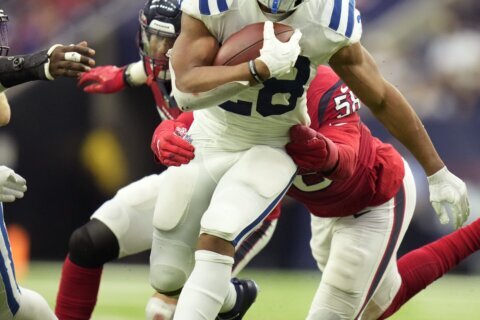