Taylor threw for 291 yards and two touchdowns in the Texans’ 37-21 win Sunday over Trevor Lawrence and the mistake-prone Jacksonville Jaguars.

Taylor took over at quarterback for Houston with Watson’s future with the team uncertain after 22 women filed lawsuits alleging sexual assault or harassment after he requested a trade.

“It was fun,” Taylor said. “It was never about me. It was about coming out and doing whatever it takes to help the team win.”

Expectations for the Texans were low entering this season with Watson out and star defensive end J.J. Watt gone to Arizona. But Taylor and Houston’s revamped running game were more than enough to handle a Jaguars team that didn’t look much better than it was last season when it got just one win despite the addition of top overall pick Lawrence.

Lawrence, the former Clemson standout, became the first rookie quarterback to start an opener in franchise history. It was a bumpy debut during which he threw for 332 yards and three touchdowns but also tossed three interceptions, often overthrew open receivers and was the victim of several drops.

It was also the NFL debut for Jaguars coach Urban Meyer, who lost the first season opener of his head coaching career after entering the game having won 17 straight openers as a college coach.

Meyer’s streak was halted by another coach making his NFL head coaching debut in Culley, a 65-year-old who spent decades as an assistant in the league before being hired by the Texans.

Brandin Cooks had 132 yards receiving and Ingram had 85 yards rushing and a TD in his Houston debut.

Ingram gave Houston an early lead with a 1-yard run that made it 7-0 with about seven minutes left in the first quarter.

The Texans pushed the lead to 14-0 when Taylor connected with David Johnson on 7-yard TD later in the first.

Lawrence put together a nice drive on the next possession and capped it with a 22-yard touchdown pass to Chris Manhertz to cut the lead to 14-7 early in the second quarter.

The Texans led 17-7 later in the second when Lawrence was intercepted by Justin Reid. But Houston couldn’t move the ball and had to punt four plays later.

Jacksonville’s next drive was a mess, with a penalty for having 12 men on the field on second down before Lawrence was picked off again. Vernon Hargreaves ran the interception back 18 yards to give Houston the ball at the Jacksonville 7.

Meyer was most disappointed in his team’s 10 penalties.

“It’s inexcusable,” he said. “Three preseason games, you’d think we’d have that fixed. So that’s something that I would guesstimate you wouldn’t see again.”

The Texans cashed in on the miscue with a 26-yard field goal to extend the lead to 20-7 with about a minute left in the first half.

Jacksonville had to punt after three straight incompletions by Lawrence, and the Texans took advantage of their last possession of the half.

Taylor connected with Cooks on a 52-yard completion on third down and found Danny Amendola for an 8-yard score on the next play to give Houston a 27-7 lead at halftime.

The Texans pushed their advantage to 34-7 when Ingram took a direct snap and handed it off to Phillip Lindsay, who scampered 5 yards for a touchdown with about 3½ minutes left in the third.

DJ Chark Jr.’s 41-yard reception from Lawrence later in the third cut the lead to 34-14.

Texans defensive tackle Vincent Taylor was carted off the field with an injury with about 11 minutes left in the fourth quarter. Culley said he didn’t have any information on his injury and would know more Monday.

New defensive coordinator Lovie Smith’s focus on takeaways paid off in the opener. Houston’s three interceptions Sunday matched the number the team had all last season. 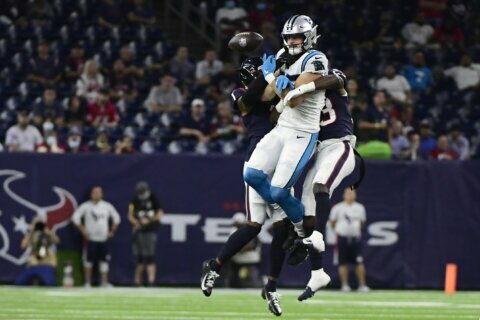