Herbert, Chargers continue to have struggles in red zone

COSTA MESA, Calif. (AP) — Justin Herbert has mostly picked up from where he left off last season when was the AP NFL Offensive Rookie of the Year.

But there are some areas of concern as the Los Angeles Chargers prepare to face the Kansas City Chiefs on Sunday.

Even with a new coaching staff, Herbert and the offense continue to struggle in the red zone. The Chargers lead the league with 10 possessions inside the opponent’s 20-yard line, but have only three touchdowns along with four field goals.

After throwing only one interception in the red zone last season, Herbert has already been picked off twice and fumbled once when the Chargers appeared to be on the verge of scoring.

Los Angeles did not score on eight of its 56 opportunities in the red zone last season, but only two were because of turnovers.

“We need to find completions, we need to run the ball more. We need to do all these things to better our game,” Herbert said. “Whether that’s finding check-downs or whether that’s handing the ball off — being smart or throwing it away. That’s what we have to do in the red zone.

“It’s a tough thing to look at because we’re moving the ball well. We’re getting into the red zone, and we just shot ourselves in the foot.”

Even though Keenan Allen fell on the pass that Dallas’ Damontae Kazee picked off in the end zone, Herbert said he should have gone to his next progression since that pass would be tight between two defenders.

Another lingering concern might be the number of pass attempts Herbert is making. He is the only QB who has dropped back to pass 40 or more times in both games. When a quarterback reaches the 40-attempt threshold, it usually does not bode well for teams.

Herbert’s 94 drop-backs are third in the league, but coach Brandon Staley isn’t concerned about the number yet, citing that a high percentage have been quick passes or run-pass options.

“I feel like there’s a lot of different types of passes, so I’m not as concerned with the volume. We trust this guy a lot. There’s nobody I would rather have with the ball in his hands,” Staley said.

But Staley also agreed that the offense needs to be more effective in running the ball in the red zone to better balance things. The Chargers have 14 carries inside the red zone, tied for third, but are averaging 1.43 yards per carry, which is fifth worst in the league.

The running game might take on more priority this week as Los Angeles faces a Kansas City defense that has allowed 404 yards on the ground against Cleveland and Baltimore.

It is a big game for both teams as each is 1-1 while Denver and Las Vegas are 2-0. Herbert’s first NFL start came against Kansas City, and he is 1-1 against them. The Week 17 win last season came when the Chiefs were sitting their starters after wrapping up home field and the AFC’s top seed.

“I don’t think there’s any pressure — that’s one way to look at it,” said Herbert about the matchup. “I think it’s an opportunity for us to show and let everyone know that we can be better. Our first two games, I don’t feel like are an accurate representation of our offense. I think we can be better, and I know the guys believe that too, so do the coaches. It’s up to us to make that happen.”

NOTES: Defensive end Joey Bosa (foot/ankle), safety Derwin James (toe), defensive end Justin Jones (calf) and cornerback Chris Harris Jr. (shoulder) did not practice on Wednesday. … James and Bosa appear to be fine as it was mostly a veteran’s day of rest. Jones missed last week’s game, but could return to the lineup this week. … Running back Austin Ekeler, guard Matt Feiler and linebacker Kenneth Murray Jr. were listed with ankle injuries on the practice report, but participated in all the drills. 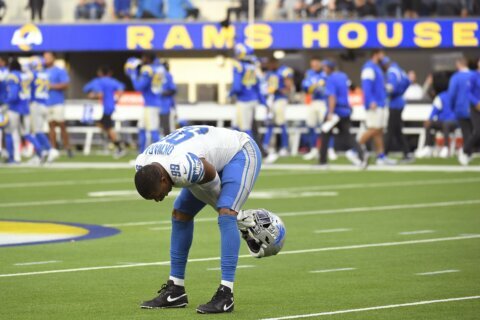 Despite loss to Rams, winless Lions show signs of progress