OPENING LINE: Broncos by 6, according to FanDuel SportsBook

TURNOVER DIFFERENTIAL: Broncos even; Jaguars minus-3.

BRONCOS PLAYER TO WATCH: Rookie CB Patrick Surtain gets his first start in place of injured CB Ronald Darby (hamstring). Surtain was the ninth overall pick in the draft. He got beat for a 37-yard touchdown by Sterling Shepard last weekend, but had a pick-six in his preseason debut at Minnesota last month.

JAGUARS PLAYER TO WATCH: Rookie Andre Cisco, a third-round draft pick from Syracuse, is close to replacing Andrew Wingard at one safety spot. No one would be surprised to see it happen this week.

KEY MATCHUP: Broncos pass rushers Von Miller and Bradley Chubb vs. Jaguars OTs Cam Robinson and Jawaan Taylor. Miller and Chubb haven’t played together since Sept. 29, 2019, coincidentally against Jacksonville. Chubb missed the rest of that season with a left knee injury, and Miller sat out all of 2020 after dislodging a tendon in his left ankle in practice. Chubb missed the opener last week with an ankle injury.

KEY INJURIES: Broncos placed WR Jerry Jeudy (ankle) and Darby on short-term injured reserve. RG Graham Glasgow is iffy after having to stay behind in New York for tests on an irregular heartbeat. He’d be replaced by second-year RG Netane Muti, who started one game as a rookie and saw action in three other games. … Jaguars hope to get CB Tre Herndon (knee) back this week after he was able to practice on a limited basis.

SERIES NOTES: Five of Denver’s six wins against Jacksonville have been by at least 10 points. The Jaguars have seven wins, all by single digits. … Jacksonville won the previous meeting in 2019 thanks to Josh Lambo’s 33-yard field goal as time expired. Rookie QB Gardner Minshew directed his first game-winning drive, which was aided by a roughing-the-passer penalty against Miller. Leonard Fournette ran for a career-high 225 yards for Jacksonville. Joe Flacco found Sutton twice for scores. … Jacksonville has hosted the Broncos twice in home openers (2007, 2010) and won both.

STATS AND STUFF: Broncos QB Teddy Bridgewater was solid in his debut, completing 28 of 36 passes for 264 yards and two touchdowns. … Denver is trying to start 2-0 for the seventh time in the past nine years but first since 2018. … Coach Vic Fangio owns an 18-9 record as a defensive coordinator or head coach against rookie QBs. … Miller needs two sacks to pass Greg Townsend Jr. (109 1/2) for sole possession of 23rd on the NFL’s career sack list. … Jaguars QB Trevor Lawrence is the only rookie in franchise history to throw for 300 yards and three touchdowns in a single game and is one of nine players in NFL history to throw for 300 yards and three scores in their first career start. … Jacksonville’s James Robinson is one of 10 running back in NFL history to total at least 50 yards from scrimmage in their first 15 games.

FANTASY TIP: After running for 101 yards and a touchdown in the opener, Melvin Gordon now faces a defense that gave up 160 yards on the ground against Houston. WRs Sutton and Tim Patrick and TE Noah Fant also worth starting. 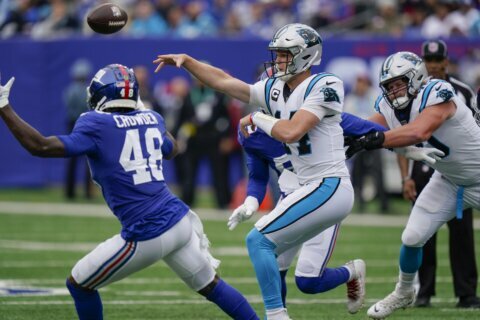 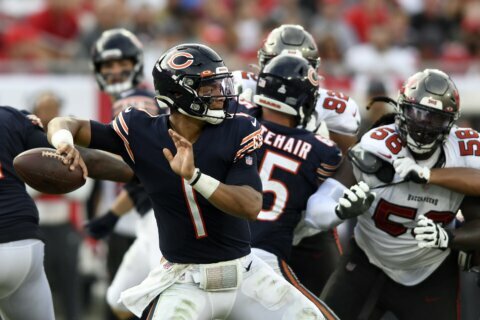 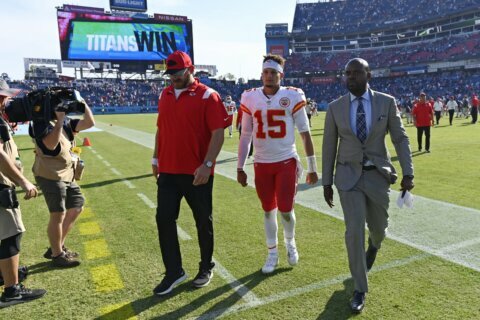