Balanced Rams are rolling to 3-0 start for Stafford, McVay

LOS ANGELES (AP) — Matthew Stafford has been every bit the upgrade Sean McVay predicted, and the Los Angeles Rams have been perhaps the NFL’s most complete team.

The first three games of the new quarterback’s partnership with the Rams’ offensive mastermind couldn’t have gone much better, and Los Angeles (3-0) is rolling into October with no reason to doubt its status as a strong Super Bowl contender.

The Rams have beaten three consecutive 2020 playoff teams to open the new season, and their 34-24 victory over defending champion Tampa Bay underlined everything that’s working so well. Not even Tom Brady could reveal any serious areas of concern for a team that rose to the challenge in front of a raucous home crowd at SoFi Stadium, where the fans realize they’re seeing something special so far.

“The best way I can describe that atmosphere is electric,” McVay said Monday. “I know that (SoFi) was set up in a manner that was designed to have that noise be a factor, and I think that definitely played a hand.”

McVay is already turning to the oldest phantom woes in the coaching handbook to keep his Rams focused on the 14 games ahead before any postseason trips. Complacency and hype will be the enemies this week in Thousand Oaks while McVay and the Rams prepare for another unbeaten opponent, the Arizona Cardinals — a team to which McVay has never lost.

“If you said, ‘Hey, who were the teams who were 3-0 last year or previous years?’ I bet you really couldn’t remember,” McVay said. “There’s so many football games to go ahead. We have to have steady improvement. Very pleased with the way the guys handled it.”

The Rams are getting standout performances across their roster. Stafford has turned Cooper Kupp into the NFL’s leader in yards receiving (367) and touchdown catches (five) while getting plenty of time to throw behind an offensive line that has been better than most expected.

McVay praised Stafford’s feel for the game and unflappability on Monday, citing multiple instances in which he showed the veteran poise necessary to make plays in tight spots, particularly on long third downs. The Rams are converting 54.3% of their third downs, and they’ve scored on an NFL-best 58.6% of their drives.

“I think we had a lot of guys touch the ball today and make plays,” Stafford said Sunday. “So that’s when we’re at our best. I keep saying it, but when we make defenses defend the entire field and everybody on our roster, that’s going to be good for us.”

The offense is averaging more than 300 yards per game, and the Rams are third in the NFL in scoring despite facing three solid opponents while other teams near the top have piled up stats against rebuilding clubs. Stafford and his receivers have already built a bond, and it’s only likely to get stronger.

The Rams’ defense is 20th in yards per game allowed after topping the league last season, and yards allowed after the catch remain an issue. Yet Los Angeles is still making big plays: Brady and the Bucs converted just four of their first 10 third downs before the final minutes.

Linebacker Kenny Young rebounded splendidly from getting tossed out in Indianapolis for making contact with an official. The UCLA product had a team-leading 10 tackles, a sack and a forced fumble against Tampa Bay. “I learned from it,” Young said. “People that know me know that’s not my character at all. I just love ball, and doing it with a ton of passion.”

There’s been no room in the offense so far for rookie second-round pick Tutu Atwell, who didn’t get an offensive snap against Tampa Bay. He’s still looking for his first NFL reception, and he has returned just one punt.

The Rams took their first major loss of the season when linebacker Justin Hollins tore his pectoral muscle. Hollins had been outstanding as a first-year starter, but surgery will keep him out for a significant stretch. … McVay hopes RB Darrell Henderson will return Sunday. Sony Michel was strong in his absence, rushing for 67 yards against Tampa Bay.

129.8: Stafford’s passer rating through three games. Only Russell Wilson has a better number, and Stafford has thrown for more yards and more TDs than the Seahawks star on just eight more attempts.

Another showdown with another perfect team when the Cardinals visit SoFi Stadium on Sunday. The Rams’ NFC West opener will be an early tone-setter in what’s likely to be a brutal division race. 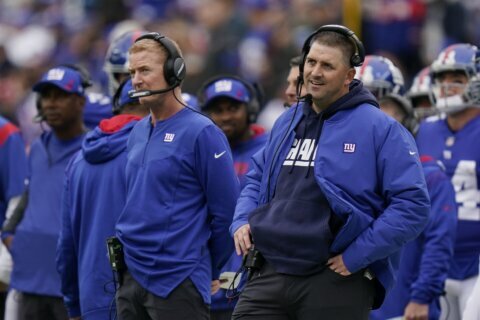 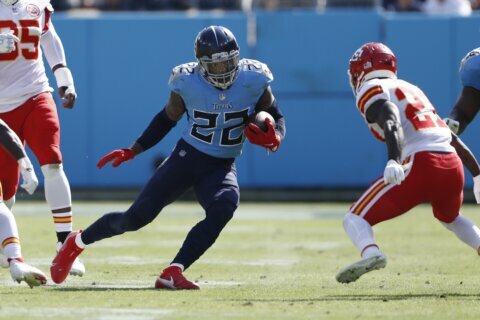