ENGLEWOOD, Colo. (AP) — The Denver Broncos insist there’s been no separation one week into the quarterback clash between Teddy Bridgewater and Drew Lock.

“Yeah, that was a little miscommunication,” said Bridgewater, whose final pass was picked off by recently signed cornerback Rojesterman Farris when wide receiver Branden Mack failed to turn for the ball at the goal line. “We’ll work on that. I’m glad we’re making that mistake now and not in the game.”

That blunder followed Lock’s blunder on his final pass, which went right to safety Justin Simmons in the end zone on a throw that was designed to go to wide receiver Jerry Jeudy.

Lock, who threw a league-high 15 interceptions in 13 games last season, said he simply made a boneheaded decision.

“Halfway between running, halfway between throwing, just make a better decision,” Lock said. “Jerry ran a good route. Either put it over the top of him or just chuck it in the dirt and go to the next play. Don’t go half and half there.”

Coach Vic Fangio, who usually relishes when his defense wins the day, was not pleased with the sloppiness that caused a bunch of false starts. He also was miffed by the interceptions his quarterbacks threw during the final 11-on-11 drills that start with 2:10 remaining, two timeouts plus the 2-minute warning and the offense trailing by a touchdown.

Both QBs had their shining moments before finishing ugly.

Bridgewater hit tight end Noah Fant with a 50-yard touchdown throw and Lock whizzed a 20-yard strike to wide receiver Courtland Sutton, who had his best day yet in his return from a torn ACL that cost him most of the 2020 season.

A week into camp, though, the Broncos are no closer to declaring their starter as they approach a season in which they aim to end a five-year playoff drought after new general manager George Paton added speed, skill and depth across the roster.

On Tuesday, offensive coordinator Pat Shurmur said that while Lock is having a better camp than he did a year ago, Bridgewater, an eight-year veteran, has already caught up in learning the offense.

“I’ve seen both guys getting better,” Shurmur said. “This is the best version of Drew that I’ve seen. I think he’s done a good job.”

He also likes this version of Bridgewater, whom he coached in Minnesota several years ago. He said Bridgewater has quickly adjusted to the Broncos’ playbook vernacular.

“Teddy has experience in multiple offenses and so what we call apple, somebody else called orange. So, he said, ‘Ah OK, it’s orange.’ So we roll,” Shurmur said. “I think Teddy has done a good job.”

The Broncos don’t view their back-and-forth quarterback competition as a detriment to their preparation even though every other AFC West team has an established quarterback taking the bulk of the starters’ snaps this summer.

“Sadly, teams typically need two quarterbacks to play throughout the year,” Shurmur said. “So all the good work that they’re getting will help both of them as we play this season out.”

The Broncos hope to get each QB a preseason start before announcing the winner of the competition, although Fangio has said he has no deadline to name his starter.

Notes: WR K.J. Hamler returned to practice after a false positive for COVID-19 forced him to sit out a day, per NFL coronavirus protocols. … OT Cody Conway was waived/injured (knee) to make room for new CB Saivion Smith. … OLB Von Miller and G Graham Glasgow had the day off. 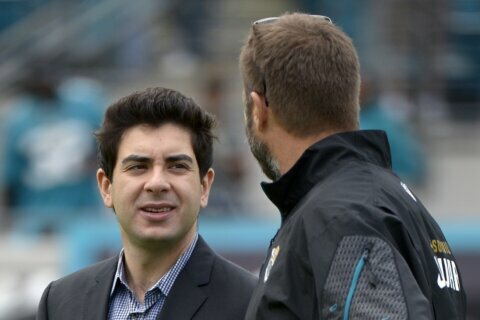