ENGLEWOOD, Colo. (AP) — Peyton Manning didn’t rule out a future role with the Denver Broncos given the ownership uncertainty surrounding one of the NFL’s iconic franchises.

“I am as interested in what’s going to happen as anybody because I care about it,” Manning said Wednesday in a Zoom call ahead of his induction next month into the Pro Football Hall of Fame.

The trust that runs the franchise valued at $3.2 billion could approve one of late owner Pat Bowlen’s children to become the team’s next controlling owner — Brittany Bowlen, 31, is the preferred choice — or sell the team altogether.

Arapahoe County District Judge John E. Scipione signed a motion this week to dismiss a lawsuit filed by two of the late owner’s daughters from his first marriage.

Amie Bowlen Klemmer and Beth Bowlen Wallace had alleged their father was already affected by Alzheimer’s and was subject to “undue influence” in setting up the three-person trust that has run the team in his absence and will decide the future of the franchise.

Bowlen died in 2019 a month shy of his induction into the Hall of Fame and five years after stepping away from his duties running the team after announcing he’d been diagnosed with Alzheimer’s.

The judge had put the four-week trial, which was scheduled to start July 12, on hold earlier this month.

In his dismissal notice Tuesday, the judge wrote that Bowlen’s estate planning documents were “valid, enforceable, and reflect Patrick D. Bowlen’s intent and will” and that the trustees — team president Joe Ellis and lawyers Rich Slivka and Mary Kelly — have the authority to administer the trust.

The dismissal of the lawsuit this week suggests a settlement has been reached but both sides are prohibited from commenting on the case.

Ellis has said all of Bowlen’s seven children named in the trust must agree on the choice if one of them is selected or the team would be sold.

That has led to speculation that Manning, who retired after the Broncos won Super Bowl 50, could be involved in some capacity.

“I’ve gone on a year-to-year basis in this second chapter,” Manning said. “I’m going to try to do this, this year. I don’t go past that because you try different things and maybe you like it, maybe you don’t. I will always be a part of the Broncos and Colts organizations in some way.

“But I’m interested in what’s going to happen. I haven’t said no to anything officially forever. I’ve just said no to some things each year. The next year, maybe things change. So, who knows what will happen in that.”

Manning said he had always hoped to finish his career in Indianapolis, where the Colts selected him No. 1 overall in the 1998 NFL draft, but a neck injury led to his dismissal from the Colts and made him the most sought-after free agent in NFL history, rivaled only by Tom Brady’s jump from New England to Tampa a year ago and Reggie White’s shift from Philadelphia to Green Bay in 1993.

“Denver, boy they just welcomed me with open arms,” Manning said. “They were the only team that really just understood what I was going through emotionally, physically, and a lot of that was Elway.

“They were the only team that said, ‘Hey Peyton, give us your Indianapolis playbook and we will form this hybrid offense with the plays we like in Denver that will help you at this point in your career. We will really give you a chance to get back going again.’ And not every team was doing that. I will always be indebted to Denver. … You can only live in one place, and Denver’s just been a great place to live. I couldn’t have made a better decision.”

Manning has lived in Denver since retiring from the NFL a month after becoming the first quarterback to win Super Bowls with two different teams.

He and his young son, Marshall, are often spotted at Nuggets games and Manning threw out the ceremonial first pitch at baseball’s All-Star Game on Tuesday night at Coors Field. 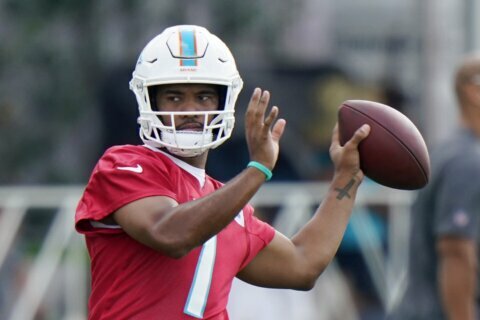 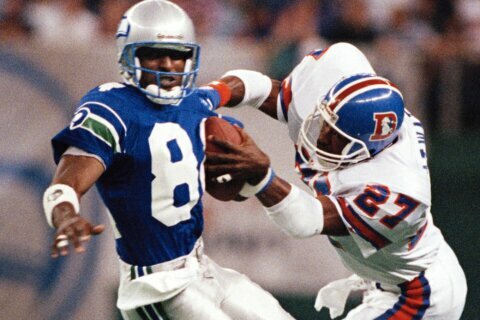