From players getting COVID-19 vaccinations to relaxed coronavirus protocols to lineup issues, particularly at quarterback, the NFL faces a multitude of questions as training camps open.

At least in 2021 there is the knowledge — and lessons learned — from completing last season during a pandemic. The league, whose most valuable person in 2020 probably was medical director Dr. Allen Sills, recognizes that while tremendous progress has been made in battling the virus, caution remains crucial.

“We’re seeing a lot of positive movements,” Sills said when seven teams were at 85% or more of vaccinated players, and approximately 70% of all players were vaccinated. “We’re pleased with that progress, but there’s still work to be done. And we’re going to work with our clubs and their medical staffs in partnership to get those numbers higher, but we’re off to a solid start and we’re optimistic we’ll see continued progress there.”

Players who haven’t been vaccinated must continue to get daily testing, wear masks and practice physical distancing. They won’t be allowed to eat meals with teammates; can’t participate in media or marketing activities while traveling; aren’t permitted to use the sauna or steam room; and may not leave the team hotel or interact with people outside the team while traveling.

“We feel like we know that in our country and around the league where and how things are improving, and to me there’s a direct correlation to people getting vaccinated,” Bills coach Sean McDermott said last month.

The preseason will include only three games for each team except for Dallas and Pittsburgh, who play four because they meet in the Hall of Fame game on Aug. 5. The regular season, of course, has been expanded by one match to 17.

Some things to look for this summer:

—Will 2020 NFL MVP Aaron Rodgers report to the Packers, hold out, force a trade from Green Bay, or retire? It might pay to tune in to “Jeopardy!” for the solution.

—What will Deshaun Watson’s status be in Houston? Investigations continue after 22 women filed lawsuits alleging Watson sexually assaulted or harassed them.

—How healthy are the Cowboys’ Dak Prescott, the Bengals Joe Burrow and the 49ers’ Jimmy Garoppolo as they come off major injuries?

—Will Carson Wentz’s career be revitalized in Indianapolis? Can Sam Darnold prove himself in Carolina? Are the Rams right that Matt Stafford is the missing piece?

—Is Tom Brady ever going to get, uh, old?

There are seven of them: Robert Saleh (Jets), David Culley (Texans), Urban Meyer (Jaguars), Brandon Staley (Chargers), Nick Sirianni (Eagles), Dan Campbell (Lions) and Arthur Smith (Falcons). Meyer is the most intriguing, a winner everywhere in college, but seemingly plagued by wanderlust at all of those schools.

History tells us that other than Jimmy Johnson, very few college-trained coaches have had even remote success in the pros. Remember that Nick Saban flopped in Miami.

Meyer starts out with an improved roster over what Jacksonville used to go 1-15 and “earn” the top overall draft pick, Clemson quarterback Trevor Lawrence.

The adjustments for players who opted out of 2020 and now return will be worth watching. There’s Chiefs guard Laurent Duvernay-Tardif, a licensed physician who missed the 2020 season to work in a long-term care facility in his home country of Canada. There’s also Jets linebacker C.J. Mosley, sidelined nearly all of 2019 due to injury. Not to mention those players among the eight Patriots who skipped last season and are returning.

“I was able to stay in pretty good shape, but I think when it comes to football shape, there’s no other treatment than just playing football,” Duvernay-Tardif said. “… I’m looking forward to more practices. I think that’s the key, is to get exposure, get some reps.”

COVID-19 wasn’t the only health issue for players last year. Significant injuries sidelined stars for long periods, and the spotlight will be on how fit they are and whether their skills have diminished.

What impact, if any, will Raiders defensive end Carl Nassib becoming the first active NFL player to come out as gay have on the pro football community?

Nassib’s announcement generally was greeted with support from all levels of the league: players, coaches, executives, owners.

“The NFL family is proud of Carl for courageously sharing his truth …” NFL Commissioner Roger Goodell said in a statement in June. “Representation matters. We share his hope that someday soon statements like his will no longer be newsworthy as we march toward full equality for the LGBTQ+ community.” 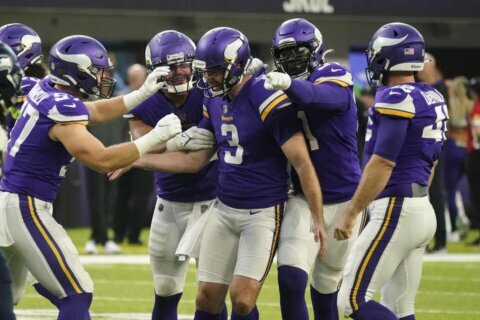 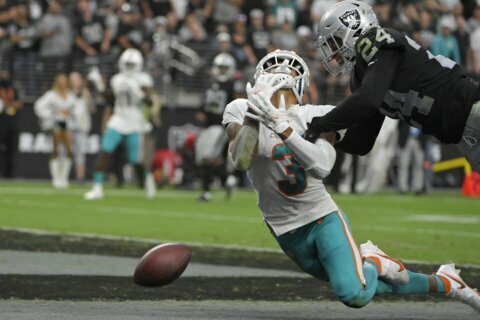 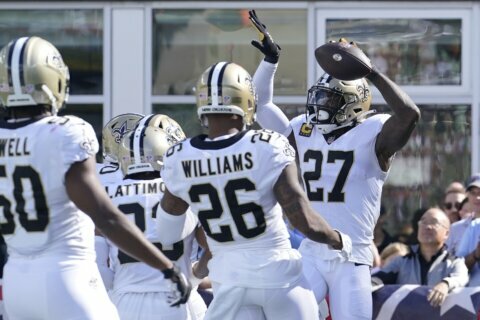 Saints finally return home, and with an evolving identity