NEW YORK (AP) — The Chicago Sky have been rolling since Candace Parker returned from an ankle injury, setting a franchise record for consecutive wins with their seventh straight.

Kahleah Copper and Diamond DeShields each scored 18 points and the Sky beat the Liberty 91-68 on Thursday night.

Parker added 12 points and 11 rebounds and Courtney Vandersloot had 13 points and nine assists for Chicago (9-7), which also routed New York on Tuesday night. The Sky won six games in a row in 2012 and 2013.

“Seven wins in a row feels nice,” Chicago coach James Wade said. “Seven in a row won’t help us win the next game. now we have to focus on Connecticut.”

The Sky led 21-15 early in the second quarter before blowing it open by scoring the next 12 points, including five by Allie Quigley.

New York (7-8) couldn’t get anywhere close in the second half.

Sky forward Stefanie Dolson was announced as part of the U.S. roster for the inaugural 3×3 tournament at the Olympics next month. Dolson will be joined by Kelsey Plum, Allisha Gray and Katie Lou Samuelson. The quartet helped the Americans qualify for the Tokyo Games earlier this month.

“It’s really dope. when you got people like DK and KD, Russ and Ciera,” DeShields said. “Steve Nash (who was at Tuesday’s game) supporting you, you know the league is heading in the right direction.”

The two Seahawks players stuck around after the game ended and played 2-on-2 on the court for about 30 minutes against Tsai’s sons. The proud dad, who showed off his own moves on the court, filmed the game..

New York continued to struggle from behind the 3-point line, going just 4 for 25 on 3s.

“Am I able to easily shrug it off? No. We’re capable of hitting those shots, but we’re not executing,” said Whitcomb. “We’re also missing shots at the rim and not executive. You can shake off a 4-for-whatever if you play defense.”

Sky: At Connecticut on Sunday.

Liberty: At Atlanta for games Saturday and Tuesday. 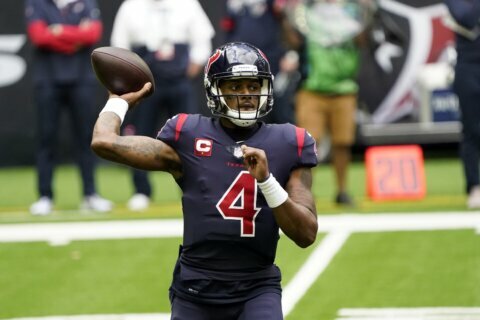 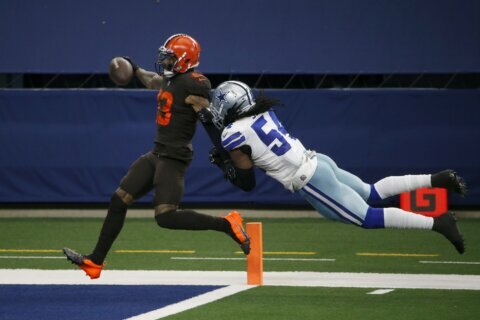