The NFL is holding its inaugural General Manager Forum next week in an effort to increase minority hiring in front offices.

The forum, named after Ozzie Newsome, will be held virtually on Monday ahead of the fourth annual Quarterback Coaching Summit. There are only four Black GMs and three Black head coaches in a 32-team league where about 70% of the players are minorities.

“I think it’s critical and I’m glad that the league is being intentional about doing it, because all of this work needs to be intentional,” longtime NFL executive Scott Pioli said of the GM forum. “In the history of our country, what we’ve done is we have … groups of people that have intentionally marginalized folks. So now what we need to do is intentionally create programs and opportunities for people from marginalized groups to advance. So the fact that they’re doing this now or we’re doing this now as part of the NFL to help people advance and get exposure and get educated and become better and be mentored is a fantastic initiative by the league.”

Pioli is among a list of speakers that includes Newsome, a Pro Football Hall of Fame tight end and the first Black GM in league history.

“I think that it’s extremely important for us as a league to recognize his contributions to the game, but also for him as a way of giving back to those hopefuls that will come behind him,” NFL vice president of football operations Natara Holloway said on the AP Pro Football Podcast.

Pioli began his career in the NFL as a pro personnel assistant with the Browns in 1992, a year after Newsome joined Cleveland’s front office. They worked six seasons together in Cleveland and Baltimore. Newsome became Baltimore’s GM in 2002. By then, Pioli was New England’s vice president of player personnel.

“I have a tremendous Ozzie Newsome story to share with the group next week when we talk about this and to talk about not only the relationship between the head coach and the general manager and owner, but all three of those relationships, because those are three independent relationships of very influential and powerful people with great skills and abilities that have to collaborate,” Pioli said.

The participation of owners is noteworthy because ultimately they have final say in hiring.

“It’s really important for us because they’re the ones who are doing the hiring and the genesis of both events is just making sure that hiring individuals are aware of the talent that’s out there so participating in this event allows for that networking to happen, even if it’s virtual,” Holloway said.

Pioli, who won three Super Bowls as a personnel boss with the Patriots, said owner involvement in hiring varies from team to team. He also worked for the Jets, Chiefs and most recently served as assistant GM for the Falcons from 2014-19.

“Some owners take more ownership, so to speak, in the process than others but it does come down to the owners,” he said. “Decisions about who they listen to is what’s most important. Are they listening to their general manager or are you listening to a family member or are they listening to the president or someone on the business side? So there’s a lot of people with information coming to the owners, helping them make that decision, which is why this is really important now, too, because generally speaking and historically is most people in those positions of power look like me and they look like the owners. So they, generally speaking, don’t have a great deal of proximity or circle of friends outside of people that don’t look like them. So very often the people that are brought to owners or the people that are talked about with owners are people that look like them.”

The two-day coaching event follows the GM forum and features various topics including how to build a coaching staff and winning culture, the qualities of a head coach, as well as provide networking opportunities for career advancement. 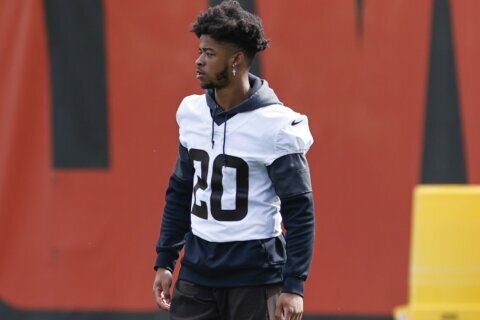 Cowboys’ Prescott takes next step since injury as camp opens