LOS ANGELES (AP) — Tutu Atwell knows he could be the smallest player on every NFL field he touches with the Los Angeles Rams.

The maybe-5-foot-9, maybe-160-pound receiver still plans to make an outsized impact after the Rams used their top draft pick on him.

“I just need the ball in my hands, and I’ll show you everything else,” Atwell said. “I give you my word. I’m a great receiver. When the ball is in my hands, I know what to do with it.”

The Rams picked the Louisville receiver with the 57th overall selection Friday night, supplementing their group of pass-catchers for Matthew Stafford with even more speed.

The choice was a mild surprise for a fairly deep contender that lost four defensive starters to free agency and a trade in the offseason, but general manager Les Snead and coach Sean McVay couldn’t resist the opportunities created by Atwell’s speed and tenacity.

Los Angeles then addressed its defense in the third round, choosing linebacker Ernest Jones from South Carolina with the 103rd pick.

Although the Rams already added speedy veteran receiver DeSean Jackson as a free agent to a group including tested starters Robert Woods and Cooper Kupp, they still chose a wideout with the 57th overall pick for the second consecutive season after drafting Florida’s Van Jefferson in the same spot.

Atwell’s greatest asset is his pure speed, and McVay can’t wait to exploit it. After three consecutive seasons with no game-changing additions of skill-position players to his offense, McVay now has Stafford, Jackson and Atwell to spark his coaching creativity.

Atwell’s size scared some teams, but not the Rams.

“I see a player that plays a lot bigger than that,” McVay said. “He seems like a friendly target on those intermediate and down-the-field routes.”

The Rams’ biggest offseason acquisition is obviously Stafford, who takes over for Jared Goff this fall — but Atwell’s selection is another symbol of the Rams’ clear commitment to recapture the offensive form of McVay’s first two seasons, when they ranked among the NFL’s highest-scoring teams with their wunderkind coach’s inventive schemes.

The Rams’ offensive production has declined sharply in the last two seasons, when they sat near the middle of the league and relied heavily on the NFL’s No. 1-ranked defense.

McVay and the Rams were locked in on Atwell early: The receiver said he had two Zoom meetings and other conversations with the Rams, who told him they didn’t intend to let him get out of the second round. Atwell said he already knows some things about McVay’s offense after watching film of the Rams’ slot receivers at Louisville over the past few years.

Atwell is a Miami native who earned first-team all-ACC honors last season while leading the conference with 1,276 yards receiving and 12 TDs on 70 catches.

“The coaches told me I could be a good fit for their offense and how they’re going to use me,” Atwell said. “So I wasn’t surprised. Coach kept his word, and I appreciate that.”

Jones was the Rams’ only other selection in the first three rounds because Snead also extended his annual tradition of trading back, sending the 88th overall pick to San Francisco for the 117th and 121st overall selections.

The Rams entered the draft with obvious needs in the defensive secondary, on the offensive line and in their group of linebackers.

They addressed the latter need with Jones, a less-hyped prospect expected to go much later.

Jones was the middle linebacker and a team captain last season for the Gamecocks, leading them in tackles for the second straight year and showing the nose-to-the-ball playmaking ability that the Rams’ linebackers have lacked in past seasons. McVay and Snead also got glowing reports on Jones from running backs coach Thomas Brown, an assistant at South Carolina in 2019.

“When you’re evaluating these players, you always have your favorite football players,” Snead said. “He’s such an instinctive player. Figures it out in there. It’s a tough area to play behind the box. He’s just got that knack to go find the ball, avoid blockers.”

Snead also said the Rams internally rated Jones as the top prospective leader in the draft.

Along with the 117th and 121st picks, Los Angeles has a fourth-round compensatory selection Saturday at 141st overall, followed by picks in the sixth (209) and seventh (252) rounds. The Rams still haven’t drafted a center after losing Austin Blythe in free agency, and they lost starters at safety, outside linebacker and defensive end. 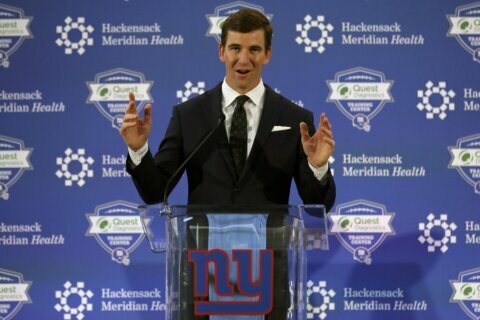