The moves were the latest in free agency for the Jets, who also reached agreements on contracts Monday with defensive end Carl Lawson, wide receiver Corey Davis and linebacker Jarrad Davis, according to people with direct knowledge of the deals.

The agreement with Hardee was made Tuesday night, and the Jets announced the re-signing of Adams on Wednesday — a few hours before he was scheduled to become a restricted free agent. Neither Harvey Langi nor Frankie Luvu, both linebackers, was tendered as an RFA and they became unrestricted free agents.

Hardee played four seasons with New Orleans, making his mark as a special teams ace — including as a gunner on the Saints’ punt team. He’s listed as a cornerback, but played just one snap on defense last season. Rather, he gives coordinator Brant Boyer, who was retained by new coach Robert Saleh, a proven performer on a special teams unit that struggled mightily last season.

Hardee was a wide receiver at Illinois and was signed by Houston as an undrafted free agent in 2017. He was among the Texans’ final cuts that summer and was signed to New Orleans’ practice squad.

Adams has been with the Jets the past two seasons after beginning his NFL career with Philadelphia. He ran for 157 yards and two touchdowns on 29 carries last year. Adams also caught six passes for 29 yards.

The 24-year-old Adams rejoins a Jets backfield that also includes La’Mical Perine, Ty Johnson and Pete Guerriero. The 37-year-old Frank Gore, New York’s leading rusher last season, is not expected to return. The NFL’s No. 3 career rusher is contemplating whether he’ll retire or try to play a 17th season. 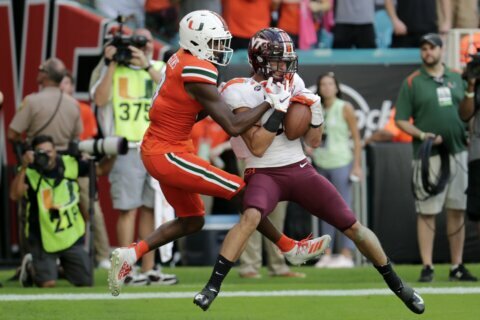