Rodgers has delivered the kind of season that puts him in contention for a third MVP honor, which would match the total won by Tampa Bay Buccaneers quarterback Tom Brady.

The Super Bowl count between the two NFC championship game quarterbacks is more one-sided. Brady won six Super Bowl titles and appeared in nine overall while starring for the New England Patriots. Rodgers led the Packers to a Super Bowl crown in the 2010 season, but hasn’t brought them back since.

“You look at Brady and everybody wants to make that comparison forever, but it’s basically turned into a quarterback stat: Super Bowls,” Packers All-Pro wide receiver Davante Adams said.

“If that’s what it’s going to be, then obviously we’re going to put as much as we can on ourselves to try to help him get there and, ultimately, relieve him of the Super Bowls being a thing that hinder him from being the GOAT (greatest of all time). In my mind, he’s the GOAT, regardless of how many Super Bowl are won.”

Green Bay led Tampa Bay 10-0 early in the second quarter back on Oct. 18 until Jamel Dean scored on a 32-yard interception return. Rodgers’ next pass was picked off by Mike Edwards and returned 38 yards to the Green Bay 2-yard line, setting up another touchdown.

After the Packers lost 38-10, Rodgers called the performance a wakeup call and kick in the rear for an offense that had moved the ball virtually at will up to that point.

The Packers haven’t been held below 22 points since. They’ll be chasing their eighth consecutive victory when the Packers (14-3) host the Bucs (13-5) on Sunday.

The performance at Tampa Bay was out of character for someone who protects the ball so well.

He has been picked off just five times in 562 pass attempts this season (526 in the regular season, 36 in a playoff victory over the Los Angeles Rams). His only other multi-interception game over the past three seasons came when he was picked off twice in last year’s NFC championship game loss at San Francisco.

“You’re going to get the ball tipped, deflected. Balls are going to go through the hands of a receiver. Something bad going’s to happen. Yet he’s thrown five picks. I think in the last three years, he’s thrown 11 picks. Think about that. You throw 38 touchdown passes and 11 picks in a season, you’d think that’s pretty good. 11 picks in three years.

“He’s been the best in the last decade at ball security. There’s no one who’s been better.”

Green Bay has finished the regular season 13-3 each of the past two years, but looks far more imposing this time around.

“A lot of people didn’t think we’d be back here after last season,” Rodgers said. “We got a lot of interesting comments last year about us being the worst 13-3 team that people had seen. Not the same type of comments this year. Obviously we’re clicking a lot better on offense.”

This may represent the 37-year-old Rodgers’ best chance to get back to another Super Bowl, though he says he isn’t dwelling on his future with so much at stake right now.

“I hope there’s more opportunities, but I don’t know,” Rodgers said. “I mean, I really don’t. That stuff is out of my control. My future is a beautiful mystery, I think. The present is such a gift to be able to stay in the moment and to have gratitude for being in this situation again, and being with the guys and having fans in our stadium and maybe snow in an NFC championship game. I’m going to enjoy these moments for sure, and just not worry about what happens down the line.” 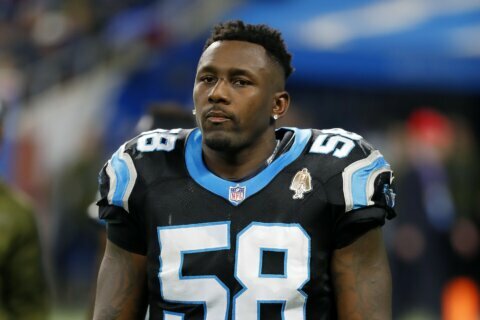