Garoppolo not worried about his future as 49ers starting QB

Jimmy Garoppolo might be one of the few people not speculating about his future as starting quarterback for the San…
Listen now to WTOP News WTOP.com | Alexa | Google Home | WTOP App | 103.5 FM

Jimmy Garoppolo might be one of the few people not speculating about his future as starting quarterback for the San Francisco 49ers.

For the second time in three years, an injury derailed Garoppolo’s season, leading to questions about whether the Niners will look to upgrade at the position this offseason either through the draft or by acquiring a veteran.

Coach Kyle Shanahan said last week that he believed Garoppolo would remain the starter in 2021 and Garoppolo’s teammates have publicly backed him as well, pointing to his leadership and the team’s success when he plays.

General manager John Lynch said he also expects Garoppolo back despite reports the team could be looking for a change. Garoppolo said that support is what matters.

“The people in this building, I love them. I love every one of them,” he said. “It’s a great group to be around. John and Kyle, I think they’ve talked to the media and said what they’ve said, and I love those guys for it. This is where I want to be and I love it here.”

The Niners acquired Garoppolo midway through the 2017 season from New England and rewarded him with a five-year, $137.5 million contract that offseason after he won the final five games.

Garoppolo then missed 13 games in 2018 after tearing his ACL in Week 3 and missed 10 games this season with ankle injuries, leading to questions about his durability.

In the one season that Garoppolo remained healthy, the Niners won 13 games in the regular season and went to the Super Bowl.

That’s why his teammates are so vocal in their backing of him, pointing to his leadership.

“He just kind of elevates the level of play of everybody around him because he expects greatness from his teammates,” tight end George Kittle said. “I know he expects greatness of himself. When you’re around a guy like that that expects that out of you and requires that of you on a daily basis, it makes you a better football player.”

But it was Garoppolo’s performance in the fourth quarter of that Super Bowl that contributes to the questions about his long-term future.

He went 3 for 11 for 36 yards and an interception, missing an open Emmanuel Sanders on a deep pass that would have given San Francisco the lead in the closing minutes. Instead, the Niners lost 31-20 to the Chiefs after blowing a 10-point lead.

Shanahan and Lynch talked about the possibility of signing Tom Brady in the offseason before choosing to stick with Garoppolo instead.

Shanahan said he will look at quarterbacks more intently this offseason, mainly because backups C.J. Beathard and Nick Mullens are eligible to become free agents.

But because the Niners can get out of Garoppolo’s deal with little dead money penalty, it will keep the questions about Garoppolo in the news.

“You have to look into everything when you’re trying to fill out a quarterback roster,” Shanahan said. “We have a starting quarterback, but in order to know where these guys are going to be, we’ve got to either re-sign the guys we’ve got or see if we can upgrade them through the draft or free agency. In order to do that, you have to evaluate everything, so you know how to stack them and stuff. So, definitely will be looking at a lot more of that stuff this year than we did last year.” 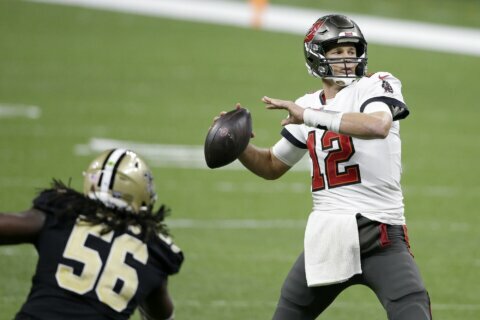