COSTA MESA, Calif. (AP) — Joe Lombardi is hoping that his second stint as an offensive coordinator goes better than the first.

Lombardi, who accepted the Los Angeles Chargers coordinator opening over the weekend, said on Tuesday the biggest thing he learned from his first opportunity in Detroit was that he needs to be more flexible when assessing his personnel and their abilities. Lombardi went to the Lions in 2015, but was fired seven games into the following season.

“Spending so much time in New Orleans and doing things one way, you kind of get used to that,” he said. “When you’re put into a new situation where the schedule is different, and maybe you’re around coaches that weren’t used to doing things the way that you were used to, just having to flexibility to adjust a little bit better, maybe, than we did back then.”

Lombardi comes to Los Angeles after a second stint in New Orleans, where he was the quarterbacks coach for five seasons. Twelve of his 14 seasons as an NFL assistant have been with the Saints.

Chargers head coach Brandon Staley and Lombardi have worked together before, but in a player-coach capacity. Lombardi was the offensive coordinator and quarterbacks coach at Mercyhurst College in 2005, when Staley transferred from Dayton to play with his twin brother, Jason.

Staley, who was hired as coach on Jan. 17, said Lombardi’s experience with the Saints should prove invaluable.

“You think about the relationship he has with Drew Brees and having a front-row seat to that relationship. It’s huge,” Staley said. “And then obviously partnering up with Sean Payton — one of the best offensive coaches in the NFL, really one of the best coaches period — that experience is invaluable.”

Lombardi said the biggest thing he gained from Brees is being exact on details and that other things, such as how to communicate with the receivers, is coachable.

The first task for Lombardi will be trying to create a system that further showcases quarterback Justin Herbert, who passed for 4,336 yards and a rookie-record 31 touchdowns this past season.

Lombardi said he hasn’t spoken to Herbert yet, but that he has reached out to him after finally getting his number. Lombardi scouted Herbert leading up to last year’s draft and had a chance to see him in person when the Chargers faced the Saints.

“I’ve seen enough to know that I have no questions about his abilities,” said Lombardi about Herbert. “I mean, if you lined up all the quarterback skillsets in the NFL, he’d be at the very top, with couple of guys. Like I said, the sky’s the limit with what he’s able to do.”

In discussions with Staley, Lombardi said they are looking to have an up-tempo offense. The Chargers were ranked ninth in the league in total offense, including sixth in passing. While they have a solid array of skill position players — including running back Austin Ekeler along with wide receivers Keenan Allen and Mike Williams — the Chargers have struggled to build an offensive line and have lacked depth because of key injuries.

“Look, I’m comfortable with whatever our guys are good at. If it’s something that the quarterback thrives in, that’s what we’re going to want to do,” Lombardi said. 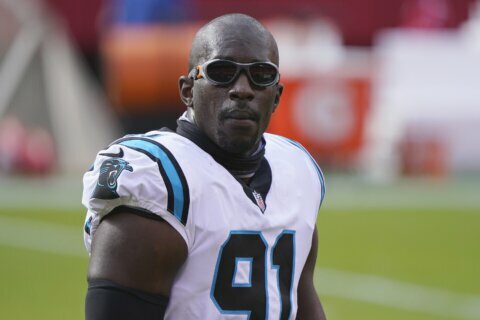