KANSAS CITY, Mo. (AP) — The Chargers spent Sunday reveling in the future of their young quarterback and pondering the fate of their head coach.

The Chiefs spent it looking forward to the playoffs.

In a game that was in many ways meaningless, Justin Herbert threw for 302 yards and accounted for four touchdowns against a team of mostly Kansas City backups, and Los Angeles rolled to a 38-21 victory at Arrowhead Stadium that should at least give its owners something to ponder ahead of their end-of-season meeting with coach Anthony Lynn.

Reports surfaced earlier in the day that Lynn could be fired as soon as Monday. And while the Chargers (7-9) finished with four straight wins, and Herbert has emerged as their franchise quarterback, the fate of Lynn may have been sealed weeks ago when they were eliminated from playoff contention for the second consecutive year.

Mike Williams, Donald Parham Jr. and Austin Ekeler had touchdown catches for the Chargers, though Ekeler’s season ended with a concussion late in the first half. Herbert also sneaked in for a score and Los Angeles added a sack of Chiefs quarterback Chad Henne for a safety as the game turned into a rout.

The Chiefs, meanwhile, already had wrapped up the No. 1 seed and the AFC’s lone first-round bye, so coach Andy Reid chose rest over reps by sitting quarterback Patrick Mahomes, safety Tyrann Mathieu and several of his best players.

“This was a lot like a fourth preseason game where we asked these guys to play offense, defense and special teams and there weren’t a lot of backups I was going to play,” Reid said, “so they really had to push through it.”

Henne, making his first start since September 2014 with Jacksonville, threw for 218 yards with his first two TD passes in 2,303 days. Byron Pringle caught the first early in the game and Darwin Thompson grabbed the second late.

In fact, Henne looked a bit like Mahomes — if you squinted really hard — much of the first half.

The 35-year-old journeyman was 6 for 6 on the Chiefs’ opening drive, which ended with a flick to Pringle in the back of the end zone. He was nearly as sharp on their second drive, when Pringle hauled in a batted pass and was tackled at the 1-yard line and Thompson promptly pounded the ball into the end zone.

“Great to get back in the end zone,” Henne said, “and great to celebrate with the guys.”

While Henne played the role of wily veteran, the first-year phenom Herbert more than matched him.

The 22-year-old quarterback answered Henne’s opening drive with a perfect one of his own, going 6 for 6 and capping it with Parham’s 8-yard TD catch. Herbert’s second drive fizzled but Chiefs returner Mecole Hardman fumbled away another punt, and Herbert capitalized with a touchdown pass to Ekeler a few minutes later.

The safety and Herbert’s TD sneak gave the Chargers a 24-14 halftime lead, and the No. 6 overall draft pick’s 48-yard toss to Williams late in the third quarter gave him a rookie record six games with at least three touchdown passes.

Earlier in the game, Herbert passed Carson Wentz’s rookie record of 379 completions in a season. His four total TDs gave him 36 this season, passing Cam Newton’s rookie record, and he became the youngest QB in NFL history to eclipse 30 touchdown passes. He finished with 4,336 yards passing, just 39 off Andrew Luck’s rookie record.

“He’s the best rookie in the league. He proved that this season,” Williams said. “Didn’t he break, like, every rookie record? So yeah, rookie of the year for sure.”

Mahomes finished his third season as the starter with 4,740 yards, 38 touchdown passes and six interceptions. He was joined on the Chiefs inactive list by wide receivers Hill (hamstring) and Sammy Watkins (calf), running back Clyde Edwards-Helaire (ankle), linebacker Ben Niemann (hamstring) and right tackle Mike Remmers (back). Mathieu was a healthy scratch while linebacker Anthony Hitchens remained on the COVID-19 list.

Chargers: Ekeler left after a helmet-to-helmet hit from Chiefs safety Juan Thornhill. Right guard Trai Turner left earlier in the half with a chest injury and safety Alohi Gilman in the fourth quarter with a possible concussion.

Chiefs: Willie Gay hurt his ankle on their third defensive play, leaving the Chiefs with only two healthy linebackers. Backup cornerback DeAndre Baker as carted off with a left leg injury early in the second half.

Chargers: Ponder their coach’s future and the NFL draft.

Chiefs: Await their playoff opponent for the divisional round.

Panthers make it official: Scott Fitterer is their new GM 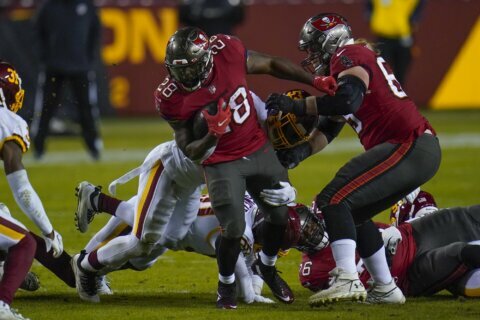