Saints’ Kamara has come through with his best season yet

NEW ORLEANS (AP) — Alvin Kamara has had the finest season of his four-year career, producing as a runner and receiver, setting personal highs and Saints records, and even tying an NFL record for rushing TDs in a game that had gone unmatched for nine decades.

It begs the question: Where the Saints would be without him?

The Saints haven’t been able to rely on 2019 Offensive Player of the Year Michael Thomas this season because he’s been sidelined eight games with injuries and will miss at least one more this week.

Record-setting quarterback Drew Brees missed four games with rib and lung injuries. Several other offensive players have been in and out of the lineup because of minor injuries or COVID-19 protocols.

Meanwhile, Kamara has come through with 1,688 yards and 21 touchdowns from scrimmage, including six TDs rushing against Minnesota on Sunday, tying a record set by Ernie Nevers in 1929.

“He’s had a phenomenal season,” Brees said of Kamara on Monday. “He’s been available. He’s been as good in the run game as he has been in the pass game, as he has been in protection. So, all around, I certainly feel like this has been his best season. He’s done great things all the way up to this point.”

Kamara’s 15 rushing TDs are a franchise record for a season — same for his total of 21 TDs scored. He also established a new career high for yards rushing in a game with 155.

Coach Sean Payton said opponents essentially must treat Kamara like “two players” because he’s so dangerous in both the running and passing game.

Kamara “gives us a lot of versatility as an offense and as a team in deciding how we want to use him each game,” Payton added. “But his yards, whether they’ve been on the ground or in the air, have been real important to the success we’ve had.”

Brees noted that Kamara’s best football has come after he signed a new contract (worth up to $75 million over five years) during training camp, much like Thomas did in 2019 when he set an NFL record with 149 catches after signing his first big extension.

“For him to have the year that he did when I think you may look historically at some guys that, where maybe the motivation isn’t quite as much (after landing a big contract) … it says a lot about the type of guys that we bring in here, and their love of the game, and their commitment to what we’re trying to accomplish here,” Brees said.

The Saints are planning to have Thomas back for the playoffs, and he may yet emerge as a crucial contributor.

But if winning the division and hosting playoff games is as important as coaches and players tend to say it is, then New Orleans can thank Kamara for his sizeable role in that.

A rushing attack featuring Kamara, Latavius Murray and sometimes reserve QB Taysom Hill accounted for 264 yards and seven TDs against Minnesota. The Saints were missing both starting guards on their offensive line and it didn’t seem to matter.

The Saints’ defense is having issues in the red zone again — something that plagued the team earlier this season. Minnesota converted all five of its drives inside the Saints 20-yard line into touchdowns.

Left tackle Terron Armstead. He has been in and out of the lineup because of injuries this season and did not initially look like himself when he returned during a loss at Philadelphia three weeks ago. But on Sunday, he was driving defenders more than 10 yards downfield on some running plays, and Brees was not sacked when he dropped back to throw.

Cornerback Janoris Jenkins was the primary defender on Vikings receiver Adam Thielen, who caught eight passes for 97 yards and a touchdown.

The Saints lost linebacker Kwon Alexander for the rest of the season because of an Achilles tendon injury. Alexander had started since he was acquired from San Francisco in a midseason trade.

3 — The number of times the Saints have rushed for more than 200 yards in a game. All three of those games occurred in the past five weeks and all were victories.

The Saints wrap up the regular season at Carolina (5-10) in a game that will influence playoff seeding in the NFC. The Saints could finish anywhere from first to third in the conference. 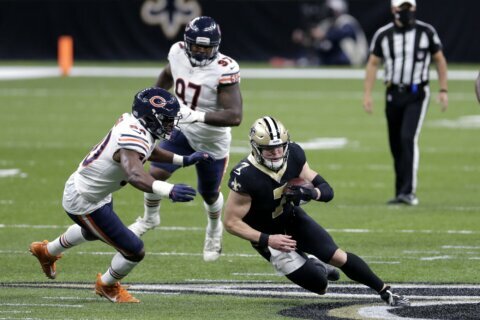