This week, more than 150 students from Historically Black Colleges and Universities attended the 2020 NFL HBCU Careers in Football Forum, the fifth of its kind.

The Forum has introduced more than 300 students and entry-level athletic department administrators to career opportunities in professional football. Participants hear from sports industry professionals and get networking opportunities. This year’s attendees represented 39 institutions.

“I’ve been honored to participate in the NFL HBCU Careers in Football Forum in person in the past and given the opportunity will continue to be involved for future years,” Falcons President Rich McKay said. “It is an amazing event that provides a great forum for brilliant individuals who bring bright and thorough questions. Not only is it a great professional development opportunity for attendees, it’s also a beneficial for our league to identify future talent.

The event opened with a panel discussion entitled “Commissioners Corner,” featuring a variety of commissioners from the SIAC, SWAC, MEAC, and CIAA. It also included opportunities for the students to engage with NFL office and club human resources representatives and such team executives as Washington’s Jason Wright, Carolina’s Tom Glick, McKay, and Baltimore’s Ozzie Newsome, a Pro Football Hall of Famer.

Since the forum’s inception, 11 students have secured internships or full-time opportunities with the league or teams, or with colleges and universities or other sports outlets.

As a member of the Junior Rotational Program and an HBCU Alum (Morehouse College),” says former participant Micah Holmes, “I can attest to the fact that the professional development advice, networking opportunities, and encouragement from professionals at the forum helped propel my career forward, and is a mandatory experience for HBCU students looking to make their mark in the sports world in the future.”

Detroit Lions running back Adrian Peterson is not ready to retire anytime soon.

The 35-year-old Peterson has run for two touchdowns in each of his last two games, giving him 28 games with multiple scores on the ground to pass Jim Brown and trail just LaDainian Tomlinson (38) and Emmitt Smith (36) on the all-time list.

“If I didn’t feel like I could be productive or if my body was telling me, ‘That’s enough. You’re pressing,’ then I would hang it up,” Peterson said. “I always say the eye in the sky don’t lie. I feel like I look better than a lot of young running backs in the NFL right now.”

Peterson has carried the ball 3,171 times with five teams since Minnesota selected him in 2007 No. 7 overall, five picks after Detroit drafted Calvin Johnson. He is four rushing attempts away from passing Tomlinson for sixth on the all-time list, going into Sunday’s game at home against the NFC North-leading Green Bay Packers.

Lions interim coach Darrell Bevell, who was Peterson’s first offensive coordinator during his first four seasons with the Vikings, has given him the ball 31 times over the last two games.

“Watching him in practice and seeing him on film also, he still has juice,” said Green Bay linebacker Preston Smith, a teammate of Peterson’s in Washington. “He has a lot left in the tank and he can easily make a big play if allowed the opportunity. He still has a lot of ability left even considering his age.”

Safeties Justin Simmons and Will Parks are back together.

The Broncos signed Parks off waivers from the Eagles, who signed him to a one-year deal last spring after he’d spent his first four seasons in Denver.

“It’s great,” Simmons said. “The last thing I remember is we played the Raiders at home last year in the final game of the season. We exchanged jerseys because it was a ‘you never know what’s going to happen’ moment. You could be here next year, you could not, on both of our ends. That was special.”

Parks went back to his hometown of Philadelphia for a $1.5 million prove-it deal, but things didn’t work out for him there. He started three games and played in six in Philadelphia, where he had 11 tackles.

Simmons didn’t get the long-term deal he wanted and signed his $11.4 million franchise tag in July. He has followed up his All-Pro season in 2019 with another stellar year.

And he’s thrilled Parks is back, although Parks didn’t play at Kansas City last Sunday night because of COVID-19 protocols regarding roster additions.

“This is a guy I came in with and spent a lot of time with. Unfortunate what happened in Philly, but selfishly, I’m really happy he’s back here and having the opportunity to close out the season with us,” Simmons said. “He’s a great player, and more importantly and selfishly for me, he’s an even better friend. Having him around the past four years has been awesome. I’m excited for him to be back.”

Simmons and Parks came into the league together in 2016 and teamed up for one of the best finishes in the league that year. Simmons blocked Wil Lutz’s potential winning extra point in the closing minutes against New Orleans, Parks scooped up the football and raced 84 yards for the first winning defensive 2-point conversion in NFL history.

Coach Vic Fangio was glad to have Parks back in the fold, too.

Fangio noted that Parks’ versatility, especially in the nickel defense, is particularly welcome given that cornerback Bryce Callahan (foot) was placed on injured reserve.

Parks was always popular in the Denver locker room.

“It’s a bonus. Any time you pick up a guy this time of year, usually it’s a guy with not much or any history with the organization he’s coming into,” Fangio said.

The Eagles awarded grants totaling $460,000 to Philadelphia-area nonprofit organizations as part of the franchise’s Social Justice Fund of the Philadelphia Foundation.

Established in 2018, the fund was formed to provide grants to organizations that work to reduce barriers to equal opportunity, with a specific focus on education; community and police relations; improving the criminal justice system; and other initiatives targeting poverty, racial equality and workforce development in the Philadelphia area. In three years, the program has provided area-based organizations with more than $1.3 million in funding.

“The Eagles Social Justice Leadership Council is honored to reward these deserving nonprofits for their incredible work,” says defensive back Rodney McLeod. “This has been a challenging year for all of us, so having these organizations lifting up our communities in times of need is life changing for so many people.”

Kansas City Chiefs offensive lineman Laurent Duvernay-Tardif, a trained physician who opted out of this season in order to help COVID-19 patients, was chosen as the winner of the Lou Marsh Trophy as Canada’s athlete of the year.

Duvernay-Tardif and Alphonso Davies, a left back for Bayern Munich, each received 18 votes from a panel of judges.

Duvernay-Tardif graduated from McGill University in Canada before he was drafted by the Chiefs, and soon became their stalwart offensive guard. He began the year by helping them win their first Super Bowl in 50 years with a come-from-behind victory over the San Francisco 49ers in February, and he’ll end it by volunteering at a long-term care facility in Quebec.

The award has been presented by the Toronto Star since 1938. It is only the third time two athletes tied for it. 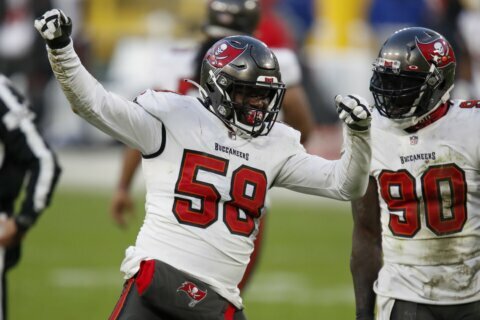 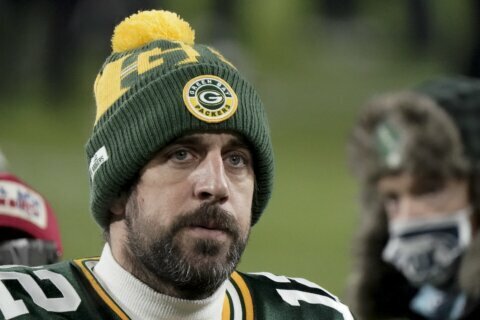