Chiefs shoot for No. 1 seed with win over Falcons on Sunday

STREAKS, STATS AND NOTES — The Chiefs can clinch the No. 1 seed in the AFC and a first-round bye with a win. They also clinch if Pittsburgh loses or ties, Buffalo loses, or if they clinch the strength-of-victory tiebreaker over one of those teams and tie the other. The Chiefs already have clinched their fifth straight AFC West title. … Kansas City needs to wins to match the Green Bay Packers (2011) for the best regular season by a reigning Super Bowl champion. … The Chiefs could tie the longest regular-season win streak in franchise history with their 10th straight. … Kansas City has never won 14 games in a season. … The Falcons are visiting Kansas City for the first time since taking a 40-24 win on Sept. 9, 2012. The Chiefs won 29-28 in Atlanta on Dec. 4, 2016 before the Falcons advanced to the Super Bowl. … Matt Ryan passed for 356 yards last week against Tampa Bay and reached 4,000 yards for the 10th consecutive season. Drew Brees is the only other quarterback with 10 consecutive 4,000-yard seasons. … Ryan reached another milestone when his third touchdown pass last week gave him 343 for his career, moving past Fran Tarkenton (342) for 10th on the career list. … Ryan set a career high by completing passes to 11 receivers against the Bucs. … WR Calvin Ridley had career-best totals of 10 catches for 163 yards last week. He has 77 catches for 1,192 yards for his first 1,000-yard season. Ridley has seven 100-yard games this season to lead the NFL. … Russell Gage, who threw for a TD two weeks ago, had a touchdown catch last week, his third of the season. … Before being picked to his first Pro Bowl, K Younghoe Koo made two field-goal attempts last week. He has made 27 consecutive field goals, the second-longest streak in Falcons history. … The Chiefs are trying to score 20-plus points for the 29th straight game, which would break their NFL record set from 2017-19. … Chiefs QB Patrick Mahomes has thrown a TD pass in 25 straight games, the longest streak in club history and longest active streak in the NFL. … Mahomes needs 538 yards passing over the last two games to join Brees as the only QBs in NFL history with multiple seasons of 5,000 yards. … Chiefs TE Travis Kelce needs 60 yards receiving to break the NFL record for a tight end set by George Kittle (1,377) last season. Kelce is 6 yards behind the Cardinals’ DeAndre Hopkins (1,324) for the NFL lead this season. … Kelce needs six catches to break his own single-season club record. … Kelce has caught a pass in 110 straight games, tied for the fifth-longest active streak in the league. … Chiefs WR Tyreek Hill needs one TD catch to pass Dwayne Bowe (15) for the franchise season record. Hill has 17 total TDs this season. He needs two more to tie Abner Haynes (1962), Larry Johnson (2006) and Jamaal Charles (2013) for the fourth most in Chiefs history. … Fantasy tip: The Chiefs will be without injured rookie RB Clyde Edwards-Helaire, so Le’Veon Bell will get the bulk of the carries against the league’s 28th-ranked run defense. Bell could be primed for a big game while Mahomes and his pass catchers take a back seat. 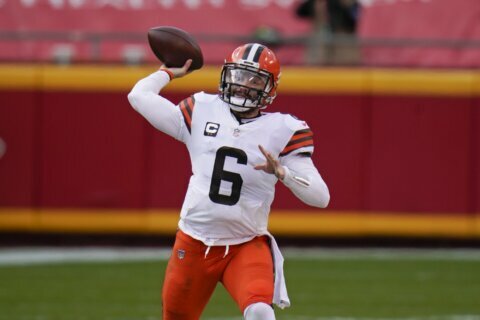 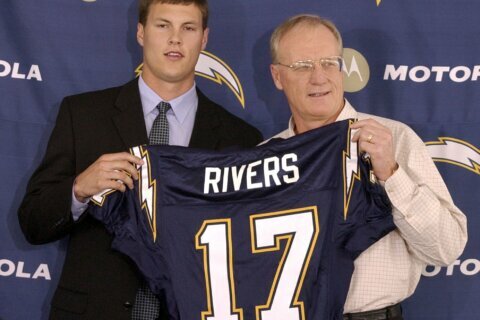 Lions agree to terms with Saints’ Dan Campbell to be coach